Pittman unsure how many recruiting spots are available 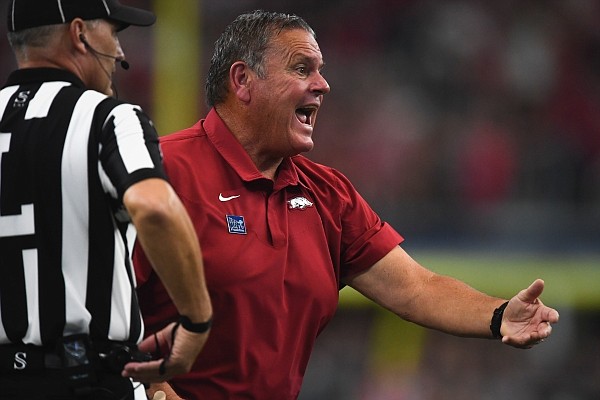 Arkansas coach Sam Pittman reacts at officials on Saturday, Sept. 25, 2021 during the third quarter of a football game at AT&T Stadium in Arlington, Texas.

FAYETTEVILLE — With 18 pledges in his 2022 football recruiting class, one ranked as a consensus top 25 haul nationally, Arkansas head coach Sam Pittman feels good about where his program is headed.

But he knows that cementing the class is far from over and while he may numerically have just three spots left right now, that could change.

That’s taking into account a waiver the NCAA Division I council approved this week that will allow you to replace up to seven of your current players that leap into the transfer portal after the 2021 season is over to get to the 85 scholarship limit.

“The numbers are fluid,” Pittman said. “I think anybody is this way to be honest with you. How many guys are going to go into the portal, how many covid seniors (with a year of eligibility left) are you going get back? It is going to cost you a number (in the 85) this next season where it didn’t before. How many do you want back?

"I think there are so many areas of how many scholarships are you really going to have to fill out 85.”

Pittman’s philosophy for the rest of this class seems simple – take can’t miss players, but not those that need development.

“I think you probably just keep recruiting for this class and if you have got a guy that you go ‘we just have to have him,’ not a guy that I think we can develop this kid, but I am talking about a guy that is a sure enough, you take him and then you just kind of figure it out.”

Pittman is hopeful that he will be successful in recruiting his own seniors that have one year left, just as he was last season when 11 so-called Super Seniors returned.

“We are going to ask several guys to come back that are seniors and I don’t know how many we will get back, but it sure helped our football team this year,” Pittman said. “ If we want them back, we are going to ask them to be in that 85.

“I will tell you it is scary a little bit because you just don’t know. What we are doing right now in our 2022 class is just recruiting like heck and if we can get one that we think can make a difference we are going to take him and figure it out later. That is the honest answer.”

One thing we’ve learned about the NCAA’s transfer portal the last few years is that it can both giveth and taketh away. That was especially the case last off-season when any kind of transfer – not just graduates – were granted immediate eligibility at their next destination.

That allowed someone like Charlotte offensive line transfer Ty'Kiest Crawford to be eligible at Arkansas, but also former Razorback wide receiver Michael Smith to play right away at Oklahoma.

One thing it did, unintended or not, was deplete the rosters of some programs, who did not have the ability to reach its scholarship level of 85 due to an initial counter limit of 25.

That was changed this week when the NCAA’s Division I Council granted the relief. It will only be for schools to replace players who enter the portal after either the end of the fall term or Dec. 15, 2021, whichever is earlier.

Pittman is on board with the waiver.

“I think you have to have something like that because there are a lot of programs that are having more go out than in,” Pittman said. “If you keep maximizing at 25, you are going to be at 70 before you know it down the road.

“Currently with us, we are not in that situation as we have 85 and we don’t have very many seniors.”

Pittman believes the waiver is a healthy response for the college football landscape by football’s powers that be.

“I am sure it will benefit most every program,” Pittman said. “I don’t know how it will benefit us this year, but down the road it certainly will when you have more portal transfers and more seniors.

“I think it it is a good rule and will try to keep the playing field even. You would hate to see one program with 70 players and another one 85. I think this is the NCAA’s way of trying to keep it balanced as much as possible.”