Turner stands out in Sunday scrimmage 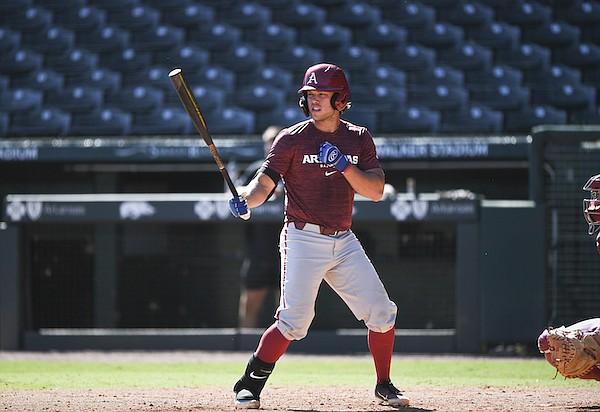 FAYETTEVILLE — When asked last month for the names of players who had stood out to him through the first couple of weeks of fall baseball, Arkansas hitting coach Nate Thompson mentioned catcher Michael Turner first.

The graduate transfer is in a three-way position battle to replace three-year starter Casey Opitz behind the plate this fall, along with sophomore Dylan Leach and freshman Max Soliz.

At Kent State, Turner was a first-team all-MAC catcher in 2019. He missed most of the 2021 season with a hamstring injury.

Turner has impressed with his bat throughout the fall, and did so again Sunday in Game 2 of the Razorbacks’ Cardinal and White Series at Baum-Walker Stadium. Turner went 3 for 4 with a pair of RBI hits and led his Cardinal team to a 9-5 victory.

The Cardinal team evened the best-of-five series at one game apiece.

“He’s had a really good fall behind the plate and at the plate,” Arkansas coach Dave Van Horn said last week. “He brings a lot of experience. He’s very physical.”

Turner, who bats left handed and throws from the right side, hit a two-out RBI single Sunday as part of a four-run second inning against White team starter Kole Ramage; led off the fifth inning with a double off the base of the wall and scored against Zack Morris; and singled and scored against Jake Faherty during a three-run sixth.

Turner indicated he is benefitting from being part of a team with a strong work ethic.

“The guys here work really hard,” Turner said. “If you work hard, the results show on the field.”

While Turner’s offense has grabbed attention, Arkansas pitching coach Matt Hobbs said Turner has surprised with his defensive play. He threw out Zack Gregory trying to steal second base in the third inning and did not have any passed balls.

“I think we thought we were getting a very good offensive player with Michael. We assumed and we hoped we were getting a good backstop back there, a guy that could catch,” Hobbs said last month on the WholeHog Baseball Podcast. “He called his own game at Kent State and has some experiences there. We’ve turned him loose this fall — really we’ve turned all our catchers loose and allowed them to call pitches in the fall and see what we have. It’s how we figured out Opitz was going to be good at it.

“Michael has been really good. Michael calls a great game.”

With Turner behind the plate, the Cardinal team pitchers allowed 5 runs, 3 hits and 6 walks in 7 innings Sunday. They also hit two batters.

Cardinal starter Mark Adamiak struck out five through two scoreless innings, but ran into trouble in the third when he walked Dylan Leach and hit Jade Putz to lead off the inning. Braydon Webb had a sacrifice fly and Peyton Stovall added an RBI double in the inning.

Stovall also hit a three-run double against reliever Elijah Trest with two outs in the fifth. All three of those runs were charged to Evan Taylor, who retired four straight after entering in relief of Adamiak, but walked a pair and allowed a single before he was pulled in the fourth.

Stovall has hit well since returning to practice last month from an oblique injury. Arkansas coaches expect him to play as a freshman because of his ability to hit. He was considered one of the top high school players in the class of 2021.

“I believe he has the ability to come in and perform with the bat and the glove, with the mentality,” Thompson said last month on the WholeHog Baseball Podcast. “Obviously you have to (prove) it and the game is very tough and demanding, but he’s put himself in that position. We’re very excited about him.”

Stovall played first base Sunday. He has practiced on the corner infield this fall after playing middle infield growing up.

“It’s a new experience and I’m excited to be able to get on the field and just compete at those two positions,” Stovall said. “The more positions you can play, the better. I’ve definitely had my struggles with it over the fall, but I’m going to continue to try to improve and work on the corners.”

Trest and Gabe Starks pitched a combined 3 1/3 scoreless innings in relief to close the game for the Cardinal team. Trest did not allow a hit after Stovall doubled against him and struck out two in 1 1/3 innings. Starks retired five in a row to end the scrimmage after allowing a one-out walk in the sixth.

Hobbs mentioned Trest, Starks and freshman right hander Nick Moten as pitchers who are being evaluated as closers.

"(Starks) has been throwing a lot of good bullpens the past week and carried it out to the field," Turner said. "He hit on just about every pitch we called."

Ramage took the loss for the White team by allowing 5 runs on 4 hits and 2 walks in a 1 2/3-inning start. Ramage also hit a batter and struck out a batter.

Miller Pleimann worked around 3 hits and struck out 3 in 1 1/3 innings of scoreless relief for the White team. Morris had a similar line with 3 hits and 3 walks in 1 2/3 innings, but also walked a batter and allowed the run after Turner’s double.

The Cardinal team scored three runs with Faherty on the mound in the sixth inning. Putz, the shortstop, and third baseman Ethan Bates recorded errors in the inning, and Turner scored on a wild pitch by Faherty, a freshman right hander who also walked two batters.

The teams are scheduled to play Game 3 of the series Monday at 3 p.m. All of the scrimmages are free and open to the public.

CORRECTION: An earlier version of this story incorrectly listed the series record.