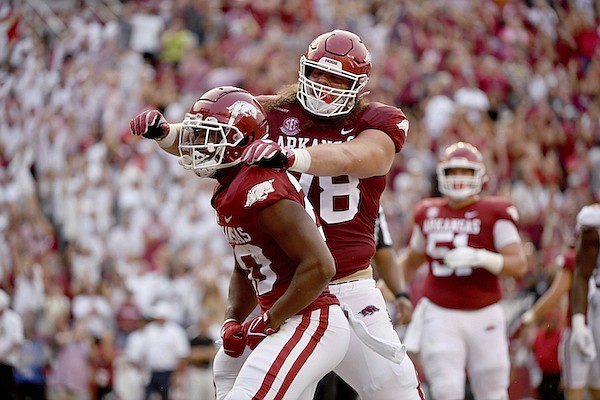 Arkansas running back Dominique Johnson (20) celebrates with Dalton Wagner (78) after scoring a touchdown against Texas during the first half of an NCAA college football game Saturday, Sept. 11, 2021, in Fayetteville. (AP Photo/Michael Woods)

FAYETTEVILLE — Arkansas tackle Dalton Wagner underwent surgery on a finger Monday, which will cause him to miss playing time for the No. 17 Razorbacks.

Arkansas coach Sam Pittman did not give specifics about Wagner’s injury, but indicated he had been playing through an injury prior to last Saturday when he did not play in the Razorbacks’ 52-51 loss at Ole Miss. Wagner started Arkansas’ first five games of the season and has 23 career starts.

“It went out on him and they couldn’t get it back in place,” Pittman said. “He had surgery on that finger this morning. His status is not going to be available for a while.”

Clary has started 37 games and played in 44 during his career. He has started games at center, guard and tackle.

“Ty’s a veteran. He’s started a lot of games,” Pittman said. “Going into the (Ole Miss) game I wasn’t one bit concerned about right tackle because Clary had been practicing it…for several weeks because of Wag’s hand. We were taking Wagner out of any good on good, so the good-on-good reps, Ty was getting.”

Pittman said Luke Jones is being evaluated as a backup tackle after tackles Ty’Kieast Crawford and Jalen St. John were moved to guard during practice last week. Pittman said he wants to continue training Crawford and St. John at the interior positions.

Following the loss at Ole Miss, Pittman said his team was beat up. On Monday he said safety Jalen Catalon has played with a broken hand since the Texas A&M game and that safety Trent Gordon was close to returning to action after missing four games with an undisclosed injury.