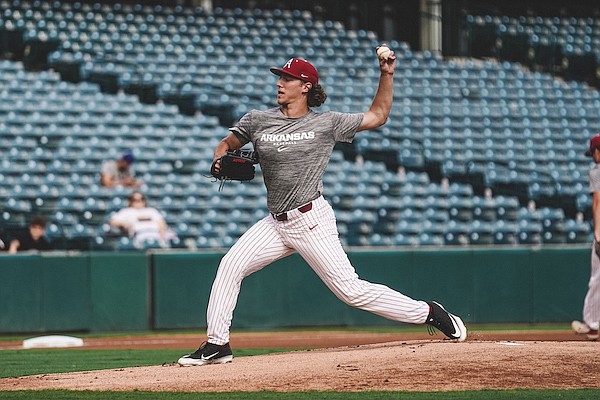 FAYETTEVILLE — The future of Arkansas pitching was on display Monday at Baum-Walker Stadium.

Three freshmen who have had a solid fall practice were good again in Game 3 of the Cardinal and White Series. Left-handed starter Hagen Smith and right-handed relievers Austin Ledbetter and Nick Moten combined to throw 6 2/3 innings without allowing a run.

Smith threw three innings and Moten recorded the final five outs to help their White team to a 4-0 victory. The White team took a 2-1 lead in the best-of-five series that is scheduled to continue Wednesday at 3 p.m.

Smith, an All-American earlier this year at Bullard (Texas) High School, has acclimated well to the college level. On Monday he allowed 2 hits, walked 1 batter and struck out 5 with command of his fastball, changeup and slider.

Smith allowed a base runner in all three innings, but the Cardinal team never seriously threatened against him. He worked around a two-out walk in the first inning by getting Michael Turner to ground out to third base.

Gabe D’Arcy doubled to the center field wall against him with one out in the second inning, but Smith struck out Reece McWilliams swinging at a fastball and Max Soliz looking at a changeup. Drake Varnado singled against Smith to lead off the third, but was thrown out by catcher Dylan Leach trying to steal third base.

“I felt like it went good,” Smith said. “I had all three pitches working and threw them for strikes. I had a good defense behind me, which helps a lot.”

Smith said his outings have been good since he was knocked around in his second appearance of the fall in September. Arkansas pitching coach Matt Hobbs said last month that Smith has been “as advertised.”

“He’s just an unbelievable talented pitcher who’s competitive and can locate all three of his pitches in the zone,” Hobbs said on the WholeHog Baseball Podcast.

As a high school senior, Smith threw 7 no-hitters, had a 0.19 ERA and struck out 168 in 73 innings — a campaign that landed him on multiple All-America teams, including the one released by Baseball America.

Hobbs said it is easy to be skeptical of how well stats like those translate to the college level, but said Smith has benefitted from playing against high-level competition prior to having Tommy John surgery in high school.

“He had to learn how to get people out with multiple pitches as a younger pitcher,” Hobbs said. “Having a mix when he got here gives him a leg up. It’s not just a good arm.

“He’s got stuff and then he’s got some ability to pitch with his stuff. I think the most important thing is he’s just made of the right things. He’s a tough kid who had to work his way back from an injury and then had to establish himself again as a prospect on the national stage. He did that during the high school season and that’s not easy to do when you’re coming back from Tommy John.”

“He knows he has to continue to get better every day and that’s the most impressive thing about Hagen so far. He doesn’t come in with any baggage of a high-profile prospect who thinks he’s owed something. He just comes in and works. It’s awesome.”

Moten and Ledbetter came with less fanfare, but still had name appeal. Moten was a high draft prospect from the St. Louis area and Ledbetter was a two-sport star at Bryant, where he led the football team to three consecutive Class 7A state championships as a starting quarterback.

Hobbs said the hard-throwing Moten has been a “nice surprise” and is being evaluated as a closer. That was his role Monday when he entered with one out in the sixth inning of the seven-inning scrimmage. He struck out Cayden Wallace looking at a 3-2 pitch, then got Jace Bohrofen to ground out to charging second baseman Robert Moore who was playing on the outfield grass.

Moten walked Turner and gave up a double to Brady Slavens to lead off the seventh inning, but stranded both in scoring position. D’Arcy and McWilliams struck out against him, and Soliz flied out to center field to end the game.

At 6-1 and 210 pounds, Moten is physically advanced for his age.

“He’s a really good competitor and a good strike thrower,” Smith said. “He throws really hard. He hides it pretty well, too, with his arm slot.”

Zack Gregory had one of Monday’s offensive highlights with a three-run home run off of Jaxon Wiggins in the first inning. Gregory’s homer was clocked at 106 mph off the bat and landed in the seats on the second level of the Hunt Baseball Development Center in right field.

Peyton Stovall scored the game’s only other run with a solo home run off the batter’s eye while leading off against Wiggins in the third inning. Wiggins allowed 4 runs, 3 hits and 3 walks, and struck out 3 in a 2 1/3-inning start for the Cardinal team.

Stovall, a freshman infielder, was also one of the top players Sunday when he had 4 RBI.

“I think our class is pretty solid pitching-wise and hitting," Smith said.

Although they are teammates in this week’s series, Gregory said he faced Moten in a scrimmage earlier this fall.

“He’s a high-spin guy,” Gregory said. “If he puts it at the top of the zone, it’s kind of like a rise ball. Then he’s got a slider that he can work in there, too. If he’s throwing them all for strikes, it’s real good.”

Gregory said the freshman class of pitchers is impressive.

“They throw strikes,” Gregory said. “They’re not just one-dimensional; they’ve got multiple pitches they’re working for strikes. It is impressive to see what they can do at such a young age.

“I think every year there’s a lot of talent that comes in here, but I think this year there’s a good group of guys coming in who are not only talented, but great guys as well. I think it’s really going to help us.”

• Turner, the Cardinal team catcher, stopped a pitch in the dirt from getting too far away, then dove back to home plate to tag out Braydon Webb in the third inning.

• Chris Lanzilli hit a ground-rule double in the final at-bat against Wiggins in the third inning. Ledbetter came out of the bullpen and got Gregory to ground out to strand Lanzilli.

• Right hander Evan Gray struck out six in 2 1/3 innings of relief for the White team.

• Jace Bohrofen made one of the game’s top defensive highlights with a catch against the center-field wall on a hard-hit ball by Moore to end the fifth inning.

• White team middle infielders Varnado and McWilliams teamed for a double play behind Zebulon Vermillion to end the sixth inning.