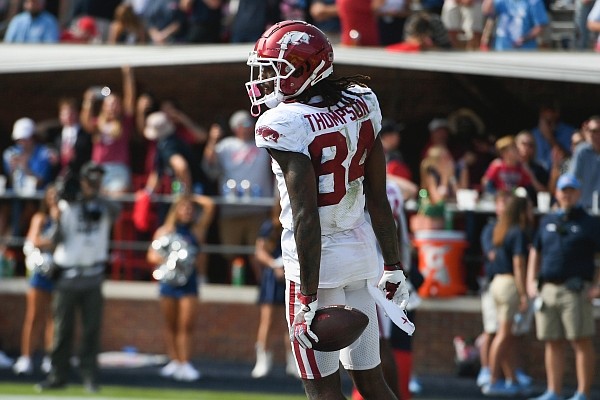 FAYETTEVILLE — Needing a touchdown to extend last Saturday’s game at Ole Miss, KJ Jefferson lofted a pass toward the back of the end zone.

As Arkansas coach Sam Pittman watched from the sideline, he initially believed Jefferson’s ball from nine yards was overthrown and the wild shootout would end in a 52-45 victory for the Rebels. But Razorbacks receiver Warren Thompson had other ideas.

A transfer from Florida State who earned a scholarship in the preseason after committing as a walk-on, Thompson snared the quarterback’s pass out of the air for the score the Razorbacks had to have. And he did it with relative ease, landing with two feet comfortably inbounds.

Though Arkansas ultimately came up one play short of a win over a ranked team on the road, the touchdown was the final big moment in an interesting and productive day for a receiver who in recent weeks has emerged as a reliable target for Jefferson.

“I think he’s getting better all the time,” Pittman said. “He still has to continue to be a better blocker (and) he has to continue to learn the offense…but (receivers coach Kenny Guiton) has done a good job for him. He’s caught some really good, big balls here in the last three or four games at least.

Thompson finished the loss to the Rebels with four catches for a season-high 76 yards and his second touchdown of the season. His 76-yard performance is the best by an Arkansas receiver outside of star Treylon Burks this year.

He is also second on the team with six receptions over the team’s last two games, trailing only Burks' 10.

Thompson’s day at Ole Miss did not begin well. He saw a well-thrown 41-yard ball by Jefferson slip through his hands inside the Rebels’ 10, then later he caught a 16-yard pass that was good enough for a first down, but he reversed course and left Arkansas two yards shy of a first down on third down.

The 6-4 receiver began to pick things up from there.

Moments later, he reeled in a 7-yard completion on fourth-and-2. And in the fourth quarter he made a number of terrific plays.

He recovered a fumble by AJ Green; caught a 46-yard pass from Jefferson on the ensuing snap; threw a key block on a 20-yard Burks touchdown; and brought in the final Arkansas score.

Pittman recently said Thompson has given the Razorbacks another threat opponents must plan and account for. He will enter Saturday’s home matchup against Auburn with a reception in five consecutive games.

“He doesn’t say a whole lot. He doesn’t speak much or talk a whole lot,” Pittman said. “But he’s turned out to be a really good complement (to Burks). They’re going to have to watch him as well instead of just one or two of the other guys.”

Jefferson said last Saturday that big days from Thompson — who played a season-high 46 snaps at Ole Miss — and tight end Trey Knox were a result of hyper-focus on details throughout the week of preparation. Jefferson said their play will serve as a confidence boost moving forward.

“We know Treylon Burks is a problem. The whole country knows it, so getting other guys the ball takes some stress off of Treylon so he can have match-up problems,” Jefferson said. "(I was) just getting those guys the ball and letting them play ball."

More passes thrown in Thompson’s direction may be in store.