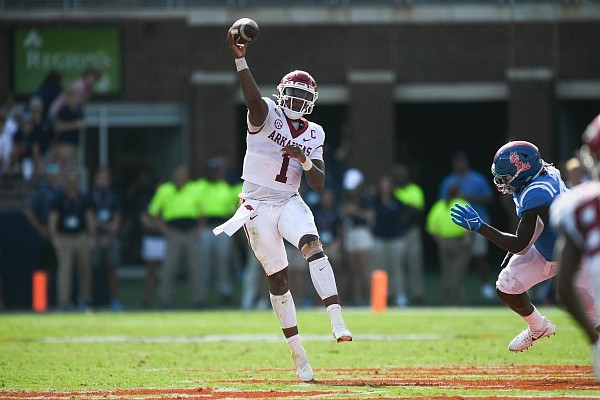 Arkansas quarterback KJ Jefferson (1) passes the ball on Saturday, Oct. 9, 2021 during the fourth quarter of a football game at Vaught-Hemingway Stadium in Oxford, Miss.

An analysis of KJ Jefferson’s eighth career start after a re-watch of the Ole Miss game:

Best throw: KJ Jefferson’s 46-yard completion to Warren Thompson in the fourth quarter to help set up a touchdown to tie the game 38-38. The pass was Jefferson’s third consecutive completion of 34-plus yards, and the play in a way made up for the deep ball Thompson dropped earlier in the game. It also pushed Jefferson, at the time, to 3 of 4 on 16-plus yard throws when targeting Thompson.

Worst throw: Jefferson’s first throw. On third down on the Razorbacks’ opening series, Jefferson did not come close to hitting receiver De’Vion Warren on third-and-7 on an out route toward the Ole Miss sideline. The pass sailed far too high. Jefferson settled in not long after this throw, but there were definitely some first-drive nerves going on here.

• Incomplete pass intended for Warren 4 yards downfield on his first attempt. Pass was too high.

• Incomplete pass intended for T.J. Hammonds 21 yards downfield. Pass was into the sideline.

1st-down throws on third down: 1

• Completed pass to Raheim Sanders 14 yards downfield for a gain of 16 yards on third-and-11.

1st-down throws on fourth down: 1

• Completed pass to Thompson 4 yards downfield for a gain of 7 yards on fourth-and-2.

Analysis: If Arkansas fans weren’t completely sold on KJ Jefferson as the Razorbacks’ starting quarterback prior to last Saturday, they are likely on board or at least have a greater sense of confidence in him now. Playing in front of a big group of family, friends and mentors, Jefferson played the game of his career just down the road from his home town. In all, he accounted for six of Arkansas’ seven touchdowns in the game and was the very definition of a dual-threat quarterback.

Unfortunately for Jefferson, it was the second game in his last seven starts in which he led the Razorbacks’ offense to 48-plus points and did not come out on the winning side.

He threw a career-high 35 passes in the loss, completing 25 — three fewer than in Arkansas’ previous three games combined — for 326 yards and 3 touchdowns. The game marked the second time this season Jefferson bounced back from a zero-touchdown-pass game to throw three his next time out. He was in complete control from the Razorbacks’ second series on.

Jefferson was as sharp throwing the ball to all levels of the field as he has been all season. Entering the Ole Miss game, Jefferson was 10 of 23 hitting targets 6-10 yards downfield and 3 of 8 when they were 11-15 yards downfield. Against the Rebels, he finished 5 of 7 and 3 of 4 at those depths, respectively, for a combined 96 yards. His first 13 completions in those ranges this season netted 140 yards.

Something else I found impressive: Jefferson threw consecutive incompletions only once in the game and they came in the second half. After that stretch, which included a PBU and inaccurate ball to Thompson, he connected on 8 of his final 10 official throws.

I thought Jefferson did a great job spreading the ball around to different weapons. I’m not sure we’ve seen a game this season in which so many players were involved in the passing game. Burks led all pass catchers with 9 targets and Thompson had 8. After those two, four other players were targeted at least three times, and Dominique Johnson and Trelon Smith each caught a pass as well.

When Jefferson kept the ball, he was more than a handful for Ole Miss. He had six runs of at least seven yards and four of 10-plus yards. His mix of power, patience and vision led to the second-best rushing game of his career yardage-wise. He also held up extremely well on his 20 carries. Jefferson ran the ball 21 total times over the previous three games.

I believe Jefferson opened some eyes at Ole Miss. Understanding that the Rebels are far from the gold standard on that side of the ball, it doesn't make Jefferson's performance any less brilliant. To engineer the top offensive performance the program has seen in an SEC game (676 yards) and to do it on the road, that’s special. And Arkansas coach Sam Pittman thinks his quarterback can be even better.