Rocket took off at Ole Miss 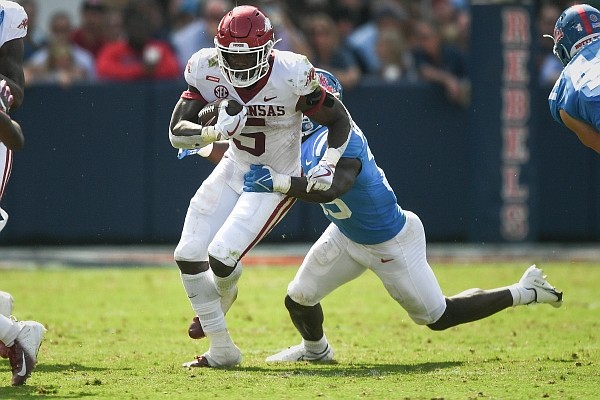 Arkansas running back Raheim Sanders (5) carries the ball on Saturday, Oct. 9, 2021 during the fourth quarter of a football game at Vaught-Hemingway Stadium in Oxford, Miss.

Arkansas running back Raheim "Rocket" Sanders has been building up his firepower all season, and he finally took off last Saturday in the Razorbacks' 52-51 loss at Ole Miss.

“When it comes down to it, it’s like our practice," he said. "If you’re going to execute in practice it’s going to show in the game. I believe in that. That’s with any sport and anything you do.”

“As an offensive lineman, it is fun watching a running back run so hard,” he added. “He is quick, he is big, he is not afraid of contact and is a fun guy to watch right now.”

“We run against him (in practice), we play against him and I am glad he is on our team,” Morgan said. “The fact that he is a true freshmen and playing the way he is playing, he has got a great future.

“He is an SEC back that has really good speed, but he can run downhill,” Morgan continued. “He runs really hard and usually doesn’t go down from the first guy that gets there. We don’t do a lot of live tackling to the ground right now, but when we thud him up, we feel him.”

It is not surprising that Sanders, who arrived at Arkansas as an early enrollee in January, is also a threat in the passing game. He lined up at tailback and wide receiver in high school.

He has 4 catches for 48 yards this season.

“He is a good back and challenges in the pass game, too, because he runs good routes,” Morgan said. “The fact that he is a true freshmen doing that, and his mindset is he is continuously working on things.

"It's good for him and good for this football team.”

As a senior in high school, Sanders rushed for 317 yards and caught 24 passes for 391 yards while totaling 9 touchdowns, including 1 on kickoff return.

Sanders arrived in Fayetteville at 207 pounds, got up to 225 and is playing at just below that mark now.

“Coming in here as a receiver it was a little different changing (full time) to the running back position,” Sanders said. “I feel like it’s actually better in the backfield blocking because outside doing the receiver job — at outside receiver or inside receiver — you’ve got to go to the man and meet him.

Sanders accepts the fact that he a developing force.

“I feel like I’ve got some more stuff to work on, like pass pro and catching the ball. I feel like I catch the ball good, but on certain plays and certain things I feel like I can do more and give more, and that’s with everything I do,” Sanders said.

He is being pushed by running backs coach Jimmy Smith and his fellow backs.

“I feel like I’ve just got to keep going,” Sanders said. “The older guys here, definitely in the running back room, I feel like they’re pushing me more and my coach is pushing me more, so with my coach doing that, it’s making me go harder.”

He’ll be doing his best to help Arkansas end its two-game losing streak.

“With that (Ole Miss) game, it’s only up from here,” Sanders said. “By any means I feel like I have to go harder no matter what it is when it comes down to it.”

For Saturday's 11 a.m. kickoff, Sanders is hopeful for a crowd similar to the Texas game on Sept. 11.

“I feel like it (made) a big impact,” Sanders said. “By having people with us being there, I feel like we play a little better having a better crowd. I know we didn’t have a crowd like that last year, but I feel like that crowd that Texas game was pretty good.

"I feel like it comes a lot with the crowd.”

Sanders chose Arkansas over a host of offers that also included ones from Oklahoma, Auburn, Miami, Florida State, UCF, Mississippi State, Missouri, Nebraska and other programs.

“I wanted to get out of Florida,” Sanders said. “Of course I had the Florida schools, but I say mainly knowing Coach Pittman was coming here. I was a receiver, so I was messing with Coach Stepp. Of course he left (for South Carolina), but at the end of the day I feel I wanted to go a program and change a program.

“Of course one player can’t do it all, but I feel like coming here made me a better player on the field and off the field, talking to the coaches and having help here. I picked here. I trusted Coach Pittman and all the other coaches.”