Clary 'glad to be playing' a role up front 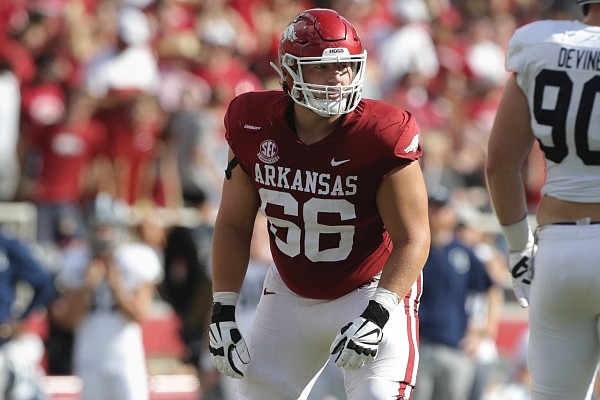 Arkansas offensive lineman Ty Clary (66) prepares for a snap on Saturday, Sept. 18, 2021 during the second quarter of a football game at Reynolds Razorback Stadium in Fayetteville.

FAYETTEVILLE — For a lot of college football teams, losing a starting tackle might result in an offense being off kilter for a stretch or prevent it from reaching its potential.

Arkansas found itself in that situation ahead of its game at Ole Miss last Saturday when it was determined right tackle Dalton Wagner, the 6-8 veteran who is regarded as the No. 7 tackle in the SEC this season, according to Pro Football Focus, would not play due to an injured finger.

He has best served the Razorbacks’ line in run blocking, an area in which he owns a grade of 79.3 this season.

But thanks to Ty Clary, another lineman with plenty of game experience under his belt, Arkansas did not skip a beat against the Rebels. His fill-in performance drew praise from Razorbacks coach Sam Pittman on Monday.

“I was really proud of Ty Clary out at tackle,” he said. “He played the entire game out there. … I thought Ty did a really good job the entire day. Did a nice job in pass protection. Ty is a veteran. He’s started a lot of games.

“Going into the game I wasn’t one bit concerned about right tackle, because Clary obviously has been practicing it during the week for several weeks, because of Wag’s hand.”

Though Clary is expected to again start at right tackle Saturday when No. 17 Arkansas hosts Auburn, the Fayetteville native has been more of a utility lineman this season. In the Razorbacks’ win over Georgia Southern last month, Clary played three positions — right tackle, right guard and center.

He was the first Arkansas lineman to see time at three spots on the line in a game since Frank Ragnow and Sebastian Tretola in October 2014.

Clary, whose cumulative offense grade, according to PFF, of 74.3 is 36th-best among FBS guards, said he felt like he performed well at Ole Miss. He did his best to keep things simple and follow the plan of Pittman and offensive line coach Cody Kennedy.

“Right tackle is fun again,” Clary said Tuesday. “Pregame we knew I was going out there, so I was ready. Coach Kennedy has done a really good job of keeping me prepared for every position. Coach Pittman (as well).

“They do great job of encouraging me and making sure I’m ready for each position and what I like and kind of what I don’t feel good about at the tackle spot. I’m just glad to be playing.”

Clary is happy to be on the field again because his run was limited in previous weeks. Following his do-it-all game in Week 3, he did not play at Texas A&M. At Georgia, Clary was on the field for 18 snaps.

In the 52-51 loss to the Rebels, he played 57 snaps in run blocking alone, and 95 for the day. As a player who has started at four positions on the line in his career, Clary’s singular focus in the coming weeks is only right tackle.

“It’s a cool thing to say you’ve done,” he said. “There’s not much to say after you’ve done center, guard and tackle. It’s pretty much the same on the other side. I’ll let Myron (Cunningham) stay (at left tackle).”

After feeling as though Arkansas was robbed of a road win against Auburn last season, Clary is hopeful Razorbacks fans show up and make an impact at Reynolds Razorback Stadium for the 11 a.m. kickoff on Saturday.

“We definitely got energy off (the Texas atmosphere),” he said. “We were loving playing out in that crowd. It's just more fun when you have a crowd behind you like that."