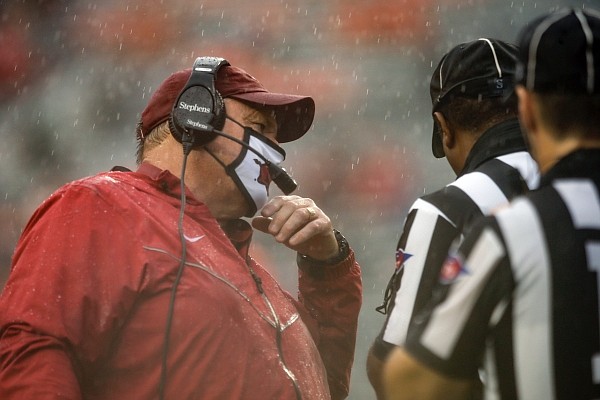 Arkansas head coach Sam Pittman talks with a game official during the first quarter of an NCAA college football game against Auburn on Saturday, Oct. 10, 2020, in Auburn, Ala. (AP Photo/Butch Dill)

FAYETTEVILLE — The pain of the poorly officiated final minute of the Arkansas Razorbacks’ 30-28 loss at No. 13 Auburn last year will be a scar that lasts forever for the Sam Pittman regime at the University of Arkansas.

Pittman said he isn’t sure how he’ll broach that topic with his No. 17 Razorbacks preparing to host Auburn (4-2, 1-1 SEC) on Saturday at 11 a.m. for homecoming at Reynolds Razorback Stadium.

“I’ve gone back and forth now on what to do with that,” Pittman said at his weekly news conference Monday. “A lot of similar players on our team. A lot of guys have gone. I’m sure the same way with Auburn as well.”

Referee Jason Autrey incorrectly blew his whistle on Auburn quarterback Bo Nix’s unintentional backward spike, which should have been judged a fumble and a live ball in the final minute last year as the Tigers tried to set up for a field goal.

Arkansas safety Joe Foucha eventually recovered the loose ball, but Auburn was awarded possession after a replay review. SEC coordinator of officials John McDaid later said because the whistle had been blown and Foucha did not make the recovery in the immediate continuing action after the spike, the replay booth was bound to give possession to Auburn.

The game officials also incorrectly instituted a 10-second runoff on the play clock after the Nix gaffe. Anders Carlson kicked a 39-yard field goal with 7 seconds remaining to provide the winning margin for the Tigers.

Pittman has referenced multiple times the Razorbacks bounced back in a strong fashion from that emotional setback, defeating favored Ole Miss 33-21 the following week with the help of seven takeaways.

Auburn Coach Bryan Harsin, in his first season on the Plains, was not part of that controversial finish. He said he’s impressed with what he sees out of the Razorbacks.

“As you look at Arkansas: Tough, physical. Those two things stand out,” Harsin said. “The coaches do a very good job. They’re two points away from being 5-1 and they’re playing aggressive. Those things all stand out. There’s a lot of really good players on their team.”

Auburn at Arkansas will mark a milestone of sorts in the Pittman era. Arkansas is favored against a Power 5 opponent for the first time in 15 games under Pittman.

Arkansas has not been a favorite against another SEC team since the Hogs went to South Carolina as a two-point favorite on Oct. 7, 2017, a game they lost 48-22 to signal the beginning of the end for the Bret Bielema regime.

The Razorbacks, who are favored by 3 1/2 points against Auburn, have been underdogs their past 35 games against SEC competition.

“I mean, I don’t know,” Pittman said when asked his thoughts on being a rare favorite. “I don’t know if it has any outcome on the game or not, but I’d rather be favored than 22-point underdogs.

“I don’t know what it means to be honest with you, but we are favored against Auburn, so we’ve come a little ways, you know? We’ll find out.”

Pittman pointed out the Razorbacks would have a 2-14 record under him (instead of 7-9) if they had lost all the games in which they were underdogs on his watch.

Pittman, like Georgia Coach Kirby Smart did for the Bulldogs’ 11 a.m. game against the Razorbacks two weeks ago, is calling for Arkansas fans to show up loud and proud for the early kickoff.

“We need our fans,” he said. “I think we’re about 500 tickets remaining for the game.

“There’s been two games that had specific [bearing], where I think the crowd mattered and helped the winning team. I’m not saying either team would have not won without the crowd, but when we went to Georgia, it was 110 decibels over there. It certainly affected the beginning of the game and throughout the game.

“Of course, when we played Texas here, our crowd was as good as any crowd that you could ever hope for. We need that crowd again. We need our students in here raising heck early before the game. I’m just telling you the football team needs the fans, and we need them to come in here and help us win on Saturday.”

The Razorbacks are coming off back-to-back losses in which they were outscored 89-51 by No. 2 Georgia and No. 17 Ole Miss.

Both the Bulldogs and Rebels carved up the Arkansas run defense to the tune of 597 combined yards, which Pittman said has to be addressed.

“There will be some corrections and changes and different things of that nature and what our schematics could be, who’s playing,” Pittman said, adding that poor tackling was an overriding concern. “Certainly there were a lot of problems we have to get fixed.”

Pittman said he wouldn’t give away schemes, but he confirmed the Razorbacks had enough defensive line depth to employ a four-man front if needed against an Auburn offense that ranks sixth in the SEC with 206.2 rushing yards per game.

He also said the Razorbacks have to have their schemes in place and well repped against the Tigers.

“We’re going to have full-time practices,” he said. “We’re not going to cut time even though we’re in Week 7. We just can’t afford to.

“We have to get better on both sides of the ball, but the glaring deal obviously everyone knows was on the defensive side of the ball. Those are areas we’re really going to have to concern ourself with this week, along with what we’re doing schematically and different things and moving people and things of that nature.”