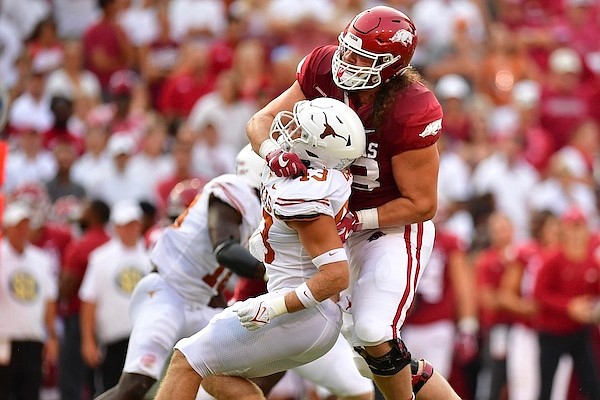 FAYETTEVILLE — University of Arkansas Coach Sam Pittman provided some insight into a couple of injuries to key Razorbacks on Monday as the No. 17 Razorbacks prepare for Saturday’s 11 a.m. homecoming game against Auburn.

Pittman said offensive tackle Dalton Wagner had a finger come out of the socket and underwent surgery Monday to fix it.

“The bottom line is that it went out on him and they couldn’t get it back in place,” Pittman said. “He had surgery on that finger this morning and so his status is [he’s] not going to be available for a while.”

Wagner, a senior from Spring Grove, Ill., had a club on his left hand during practice last week and traveled with the team to Oxford, Miss. for Saturday’s 52-51 loss to then-No. 17 Ole Miss.

However, super senior Ty Clary started at right tackle in his place, ended a streak of 10 consecutive starts for Wagner, who has 23 starts in his career.

Additionally, Pittman said sophomore safety Jalen Catalon was playing with a cast on a broken hand, which he believes occurred in the Razorbacks’ 20-10 win over then-No. 7 Texas A&M on Sept. 25. Catalon has 15 career starts and seven in a row.

Pittman said he thought Catalon’s inability to come down with a second quarter interception against Ole Miss was likely a product of the cast.

“It’s a little hard for him,” Pittman said. “He probably would’ve made that. I believe he would have if he would’ve been able to not have a cast on.”

Pittman added Catalon would likely have to play the rest of the season with some kind of protection on his hand.

Additionally, nickel back Trent Gordon, who has not traveled the past couple of weeks due to an unspecified injury, should be close to returning, Pittman added.

“Gordon’s been hurt, but he’d be playing a lot of ball for us now if he wasn’t,” Pittman said. “I’m hoping there’s a possibility he can get back this week.”

Tight end Trey Knox, who appeared to tweak an ankle in the second half at Mississippi, was not involved at Monday’s practice during the media viewing window.

Knox got rolled up from behind on a running play near the Arkansas sideline and hopped around on the sideline. However, he returned to the game and caught two passes for 18 yards during the Razorbacks’ 75-yard drive in the final minute.

Linebacker Jackson Woodard and receiver Chris Harris wore green no-contact jerseys during practice Monday. Woodard, who had dressed for every prior game this season, did not travel last Saturday.

The Arkansas running backs worked with four custom-made footballs that had ropes attached to one of the noses during Monday’s practice.

As one group of running backs ran with the ball, another set held the other ends of the ropes and gave hard tugs at varying intervals trying to pull the ball free.

Freshman running backs Raheim “Rocket” Sanders and AJ Green each had a fumble against Ole Miss, with Rebels linebacker Chase Campbell yanking the ball free from Sanders and recovering it in the second quarter. Wideout Warren Thompson recovered Green’s fumble after an 8-yard gain early in the fourth quarter and then caught a 46-yard pass on the next snap to set up Treylon Burks’ 20-yard touchdown catch.

Sanders’ lost fumble was the first by an Arkansas running back since Trelon Smith had one against Alabama in Game 10 last season.

Both quarterbacks — Arkansas sophomore KJ Jefferson and Ole Miss junior Matt Corral — involved in the Razorbacks’ 52-51 shootout loss at Ole Miss were named to the Davey O’Brien Foundation’s weekly list of the top quarterback performances in the country.

Normally the group has a Great 8 of the week, but this time they expanded it to the Great 8 “Davey Double” because of extraordinary games by a multitude of signal callers.

The late Jon Richardson, Arkansas’ first Black scholarship football player in 1969, will be honored Saturday before the Razorbacks’ game against Auburn.

UA interim Chancellor Charles Robinson, Athletic Director Hunter Yurachek and members of Richardson’s family will take part in a ceremony at 9:45 a.m. to dedicate a plaque in his honor on the Difference Makers Plaza, near Gate 10 at the northwest corner of Reynolds Razorback Stadium. The event is open to the public.

The Richardson family also will be the honored guests at the lighting of Reynolds Razorback Stadium at 7:40 p.m. Friday and serve as honorary captains for the Auburn-Arkansas game.

The Razorbacks’ home game at Little Rock’s War Memorial Stadium against Arkansas-Pine Bluff on Oct. 23 has been selected for an 11 a.m. kickoff, and it will air on the SEC Network.

The Razorbacks and Golden Lions will meet for the first time. It will also be Arkansas’ first game in the capitol city since a 24-14 setback to Missouri in the 2019 season finale.

With next Saturday’s game against Arkansas-Pine Bluff also falling into the 11 a.m. broadcast window, the Razorbacks will play on four consecutive weeks at that time. Arkansas dropped back-to-back 11 a.m. road games at No. 2 Georgia (37-0) and No. 17 Ole Miss (52-51) heading into Saturday’s home game against Auburn.

Pittman said he isn’t worked up over the early kickoffs.

“I don’t think I’ve ever been a part of as many 11 a.m. games in a row at all, let alone on the road that many times,” Pittman said. “I’m grateful for 11 a.m. games. They’re a lot better when you win because you can go home, look at everybody else and say, ‘Why’d he make that call? Why’d he do that?’ And have a good time.

“But when you lose, it’s not any fun. You go home and you think over and over and over about how you can … A man who corrects himself looks at himself.”

Sam Pittman gave interesting insight into how he processes tough losses and the need for improvement on Monday, just after talking about his opinion on early kickoffs.

“I know we didn’t play well defensively and I get all that,” he said, referring to Saturday’s 52-51 loss at Ole Miss. “I have to look at me first. What am I doing to help them? Am I giving input? Am I looking at enough film to find a flaw over here?

“Things that can help because of my offensive background, looking at their offense to help our defense. But I’m going to do better. I can help and I need to.”

CBSSports.com’s Jerry Palm is now projecting the College Playoff semifinal games to consist of 1 seed Georgia vs. 4 seed Cincinnati in the Orange Bowl on one side and 2 seed Iowa vs. 3 seed Oklahoma in the Cotton Bowl on the other.

Palm’s latest read has Arkansas taking on Nebraska of the Big Ten in the Outback Bowl on Jan. 1. The Cornhuskers are 3-4. Arkansas and Nebraska have met only once, with the Razorbacks scoring a 10-7 win in the Cotton Bowl after the 1964 season to claim national championships awarded by the Football Writers Association of America and the Helms Athletic Foundation.

247Sports.com’s latest projection has the Razorbacks taking on Michigan State of the Big Ten in the Citrus Bowl on Jan. 1. The Spartans are currently 6-0 and ranked No. 10 in the Associated Press poll. Arkansas and Michigan State have not played in football.

Ole Miss offensive tackle Nick Broeker was selected as the SEC’s co-offensive lineman of the week by the league office Monday.

Broeker, a junior, graded out at 90% as the Rebels racked up 611 total yards and 324 rushing yards against Arkansas and produced a pair of 100-yard rushers in Snoop Conner and Henry Parrish Jr.