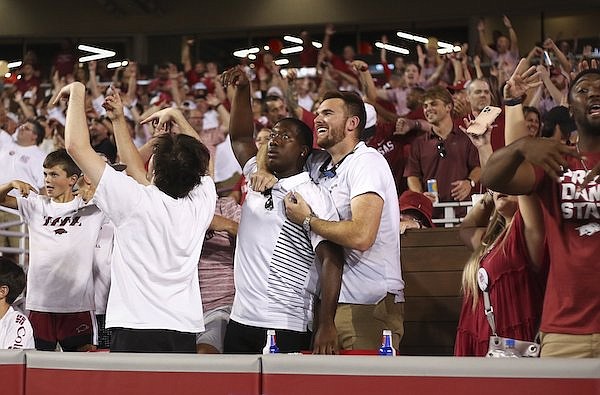 Arkansas fans are shown during a game against Texas on Saturday, Sept. 11, 2021, in Fayetteville.

According to the Razorbacks' ticket website, a limited number of club seats remain for the game, which is scheduled to kick off at 11 a.m. at Reynolds Razorback Stadium. It will be televised by CBS.

A spokesperson for the program said all remaining tickets are expected to be purchased by Thursday.

“Isn’t going to be good to be back home?” Pittman said during his radio show Wednesday. “I heard this afternoon it’s sold out, guys, so we’ve got a sellout coming in. Thank you so much.

It would be the second home sellout of the season for the 17th-ranked Razorbacks, who also sold out their 40-21 victory over Texas on Sept. 11. The Texas game was the first to sell out since a 2018 renovation expanded the Reynolds Razorback Stadium capacity to 76,412.

It would be the first time since 2016 the Razorbacks have had multiple sellouts in the same season. Arkansas sold out four games that year.

The Razorbacks (4-2, 1-2 SEC) will be playing their first home game since Sept. 18 when they defeated Georgia Southern 45-10. Arkansas has lost two straight games at Georgia and Ole Miss, and also beat Texas A&M on a neutral field during a three-week stretch of out-of-state games.

Auburn (4-2, 1-1) fell out of the national rankings this week following a 34-10 home loss to Georgia. The Tigers have split a pair of road games this season at Penn State and LSU.