'Salt of the earth' Wagner in good spirits 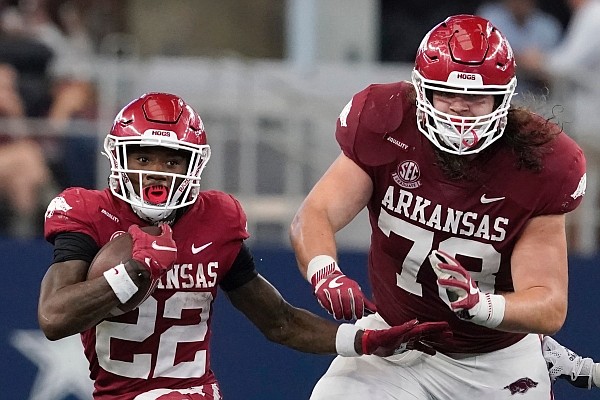 FAYETTEVILLE — Based on the manner in which Arkansas coach Sam Pittman discussed right tackle Dalton Wagner’s injured finger, it was a no-brainer in his mind that it needed to be fixed, and soon.

On Monday, Pittman announced that the veteran lineman underwent surgery that day to repair it and would not be available "for a while." He noted that the finger popped out and the team’s training staff was unable to properly reset it.

“I’ve coached for a long time — hence the gray and all that stuff — but I'll tell you what: ol' Dalton Wagner’s one of the greatest kids I’ve ever been around,” Pittman said Wednesday. “He’s tougher than an ol' billy goat.”

Wagner had fared well on the right side of the line through five games in 2021. According to Pro Football Focus, Wagner holds a cumulative offense grade of 75.1, the seventh-best mark among SEC tackles.

When assessing run blocking, he has been even better, posting a figure of 79.3 over 161 such snaps. Only four other tackles in the league have performed better in that regard, so his absence will likely be felt at times moving forward.

Pittman said Wednesday that Wagner has remained in good spirits since his operation.

“He’s tough. Kids love him on the team, and his attitude has been great,” he added.

Prior to Arkansas’ game at Ole Miss, Wagner had started 10 consecutive games at right tackle dating back to the victory over Tennessee last season in Fayetteville. And his 23 career starts are good for fifth most on the team.

The Razorbacks had also found solid success running the football to his side of the field in his five starts, too.

Arkansas rushed for an average of 6.45 yards per carry between center and right tackle through Week 5 and totaled 13 explosive runs, according to SECStatCat, a website dedicated to SEC football analytics.

In that same span, it gained 4.93 yards per attempt and 9 explosive runs off right tackle.

“He’s very disappointed that he had to miss last week and some games and things of that nature,” Pittman said. “But he’s salt of the earth, man.”

Ty Clary, a preseason third-team All-SEC selection by PFF, is expected to fill in as Wagner recovers. He has started a team-high 37 games going back to his freshman season in 2017.