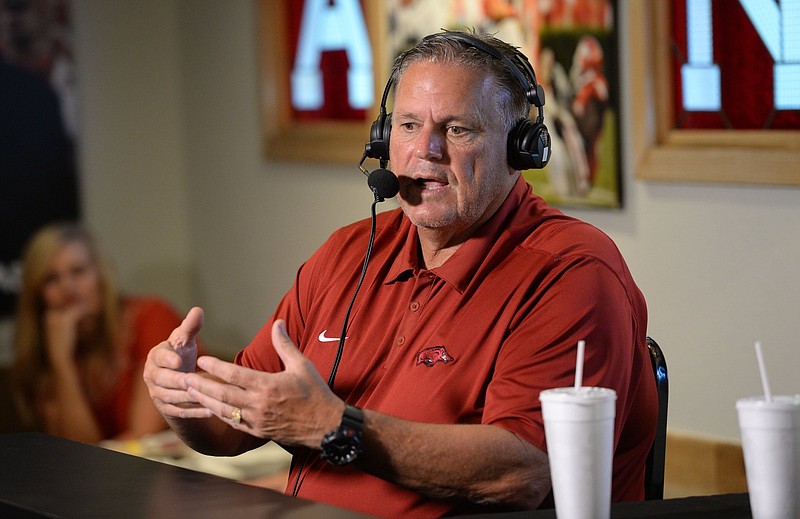 Pittman said the No. 17 Razorbacks’ game against Auburn on Saturday is considered a sellout, then spoke multiple times throughout the hour about the difference a loud home crowd can make.

Pittman on multiple occasions made reference to the noise the Razorbacks faced two weeks ago Georgia. The crowd of almost 93,000 at Sanford Stadium registered a decibel reading of 110, Pittman said, and the Bulldogs beat the Razorbacks 37-0.

“I’ll tell you, Georgia’s fans made a difference,” Pittman said, “and I’ll guaran-damn-tee you we will, too, on Saturday.”

Pittman alluded to environments like the one expected Saturday as being one of the goals he set when he was hired as Arkansas’ coach in December 2019. At the time the Razorbacks were playing in half-empty home stadiums and had lost 19 consecutive SEC games.

“When we came here, what we wanted for our kids was an experience at the highest level of college football, because we’re the University of Arkansas,” Pittman said. “We’re headed in that direction. It makes me happy that these guys are now experiencing things like ‘College GameDay,’ CBS game of the week, SEC Network was here, we’ve been on ESPN, CBS. We’re not the worst game on whatever network anymore.

“It’s different when you’re on ‘College GameDay’ than when you’re on nobody’s game day. You want the kids to have that experience, which we can give them now. I think it’s a big, big deal because you want them to be able to experience everything at the highest level.”

Pittman said he sees a similarity between his team and Auburn, which have matching 4-2 overall records. The Razorbacks have played one more SEC game and are 1-2 in league play, while the Tigers enter with a 1-1 SEC record.

“Both of us have lost games to quality opponents,” Pittman said. “It’s going to be a heck of a game.”

Auburn, which fell from the rankings following a 34-10 home loss to Georgia last week, has already played in two of college football’s best environments. The Tigers lost 28-20 at Penn State on Sept. 18 and rallied to win 24-19 at LSU two weeks ago.

“I really like Auburn’s team,” Pittman said. "They’re physical. They’re an SEC team. When they walk on the field, they’ll look like an SEC team. I think they’re a more physical team than they were a year ago.”

The Tigers, who won 30-28 over the Razorbacks with a controversial ending last season at Jordan-Hare Stadium, return mobile quarterback Bo Nix, who has made a number of highlight-reel plays this year with his ability to elude defenders and extend plays.

“Nix is a really good quarterback, but yet he’s better outside the pocket, scrambling and making things happen,” Pittman said.

In practice this week, Pittman said roughly half the plays during the team’s pass defense periods have included a scramble drill to prepare for Nix.

“We don’t want him to scramble — we want to keep him in the pocket — but if he does, that’s where he’s dangerous,” Pittman said. “I’d say two out of four reps, we’re working on him scrambling and matching up with receivers, and then somebody’s got to run him down….Once he gets on the move, it can be scary.”

Pittman also had praise for his quarterback, KJ Jefferson, who accounted for 411 yards and six touchdowns last week at Ole Miss. Pittman said Jefferson “did a great job with his reads in the run game” and aided from strong play around him, including from the offensive line and his running backs.

“They tried to take the running game away and we were able to throw the ball,” Pittman said of Jefferson’s 326 passing yards. “It’s so great to have a quarterback who can do both. In my opinion, it was (offensive coordinator) Kendal Briles’ offense at its best. That was why I wanted to hire him because I knew he would utilize a running quarterback if we had one, and certainly we have one.”

Pittman said he felt the Razorbacks’ offense had worn down Ole Miss by halftime and the defense would make the needed stops in the second half. That didn’t materialize, though, and the Razorbacks lost 52-51 when Jefferson threw high for Treylon Burks on a two-point play after throwing a touchdown pass to Warren Thompson with no time remaining.

“He played with that finger jacked up for a while,” Pittman said. “He had a hard time getting it back in place and then I said, ‘That’s it. We’re not doing this anymore. We’ve got to get it fixed.’

“You’ve always got to think about the kid first and then the team second. You have to think about the health of the individual first, and then you think about who you’re getting ready to play. We did the right thing there with Wags. I don’t know how long he’ll be out but he’ll get back, and it’s just a bad deal for him because he’s such a competitive kid and the team counts on him.

“We operate that on a Saturday we’re going to put who we have out there and coach them up well enough to win the game. Sometimes it doesn’t happen but everybody in that room believes it’s going to.”

Pittman acknowledged the Razorbacks “have to play better on defense,” which includes better tackling and doing a better job of setting the edge along the line of scrimmage. Ole Miss totaled 610 yards against Arkansas and scored three touchdowns of longer than 50 yards.

“If you look at where we were against Texas and Texas A&M, our defense was great, and then the last two weeks hasn’t quite been as good,” Pittman said. “But we can fix that because we’ve got the same kids. We can fix that and we will. We’ve done a nice job of getting off the field on third down. The problem with Ole Miss is they were converting fourth downs.”

Pittman said it has been important for the team to have strong leadership this week.

“They look at you like how are you going to react to this situation,” Pittman said, “and you better react as a grown man and figure out what you can do better.”

Pittman said the team practiced indoors Wednesday as heavy rains passed through Fayetteville. He said he took it easy on the team at the end of practice and cut the number of tempo and red-zone reps in half.

Much to Pittman's liking, cooler weather is expected later in the week and the high temperature Saturday is expected to be in the mid-60s.

“That’s the one thing about the preseason and all the way up to Game 6 was the heat,” Pittman said. “We couldn’t get away from it. We certainly did this week. It’s been good.”