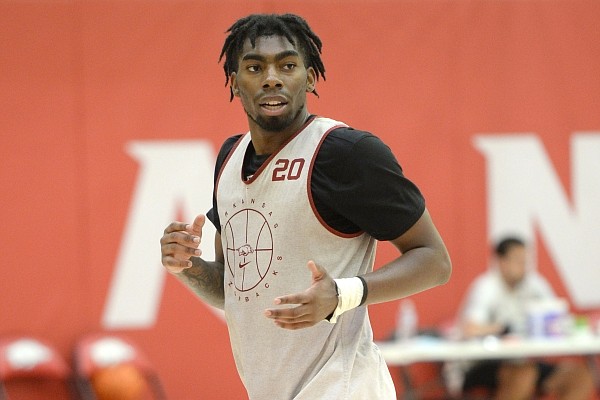 Arkansas forward Kamani Johnson runs to the baseline Tuesday, Sept. 28, 2021, during practice in the university practice facility in Fayetteville.

FAYETTEVILLE — Arkansas began preseason basketball practice with injuries to several players Sept. 28, and the Razorbacks will be less than full strength for their Red-White game this weekend.

Arkansas coach Eric Musselman said he is not sure who will or will not play as of Thursday afternoon, but said Trey Wade, a 6-6 forward transfer from Wichita State, will not take part in the team’s intrasquad scrimmage. Wade is recovering from an injury to a tendon in his knee that did not require surgery.

He said late last month that Wade would miss 4-6 weeks.

Sophomore Jaylin Williams is expected to be on a minutes restriction for the Red-White Game, which is scheduled to begin at 2 p.m. Sunday in Barnhill Arena. The 6-10 forward “aggravated an old ankle injury” prior to the team’s first practice.

“Hopeful that Jaylin Williams will play a little bit,” Musselman said. “I’ll probably limit his playing time as much as the training staff will.”

Pittsburgh transfer Au’Diese Toney was limited in the portion of Arkansas’ first workout that was open to reporters due to a left knee injury. The wing said he is healthy again and looking forward to his first appearance in front of Razorbacks fans.

“I’ve been practicing. Just a couple of bruises; nothing major,” he said.

“It’s an exciting feeling being able to put a jersey on and get a new opportunity to do what you love. It’s just a blessing just to be in the position I am today.”

Musselman said forward Kamani Johnson, who has practiced each day, is a “game-day decision” because of an unspecified injury. He will be held out of the team’s work Thursday.

Point guard KK Robinson, who missed most of the 2020-21 season following January foot surgery, is expected to be in uniform.