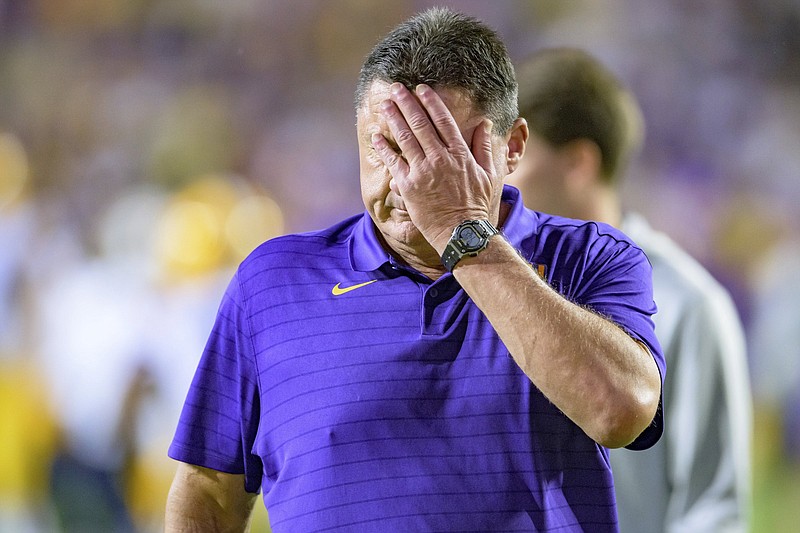 LSU Coach Ed Orgeron said he realizes the Tigers’ struggles this season have placed him on the hot seat. “I understand the expectations of LSU,” he said. (AP/Matthew Hinton)

LSU Coach Ed Orgeron knows his job is in jeopardy.

The Louisiana native is well aware his Tigers are 8-8 since winning the 2019 national championship and face five ranked SEC teams in their next six games after losing 42-21 at No. 11 Kentucky last week.

“All we can do is go to work and take it one day at a time and give it the best shot we can. That’s what we’re doing.”

LSU plays No. 20 Florida on Saturday in Tiger Stadium as speculation from local and national media mount about when Orgeron will be fired.

“We don’t pay attention to what’s going on out there,” Orgeron said. “I know our players listen to it. I’m sure a lot of people around the program are listening to it.

“And I understand that it’s very bad. I get that. But my job is to come to work with a positive attitude every day.”

Orgeron said being fired as Ole Miss’ coach after the 2007 season helped prepare him to handle the distractions he’s now facing at LSU.

Georgia at the top

Georgia is ranked No. 1 by The Associated Press voters for the first time since the 2008 preseason poll.

The Bulldogs moved up from No. 2 and replaced Alabama after Texas A&M beat the Crimson Tide 41-38.

“It’s just a number, right?” Georgia Coach Kirby Smart said. “The goal is to be No. 1 at the end of the season. We always know that.”

Smart said Georgia’s coaches and players focus on preparing to play Kentucky, not on the No. 1 ranking.

Georgia senior linebacker Adam Anderson said there was “a little excitement at first” when the Bulldogs learned they were ranked No. 1.

“You don’t want to get overwhelmed just thinking about that No. 1 position,” Anderson said. “At the end of the day, you’ve got to remember about what got you here now.”

In 2008 Georgia fell from No. 1 to No. 2 a week into the regular season despite beating Georgia Southern 45-21. USC moved into the No. 1 spot on the strength of the Trojans beating Virginia 52-7 to open the season.

Georgia hasn’t been ranked No. 1 during the regular season since 1982, when the Bulldogs held the top spot for five weeks until losing to Penn State 27-23 in the Sugar Bowl.

“Do you worry about the psyche of guys reading it and looking at it?” Smart said of the ranking. “Yeah, you’ve got to do a good job talking to your guys and keeping them grounded. That’s kind of what we’ve been working on for 10 months around here.”

Texas A&M’s 41-38 victory over Alabama at Kyle Field on Saturday night marked the 22nd time in the last 50 seasons that an unranked school has beaten the No. 1 team The Associated Press poll, according to research by The Athletic.

Arkansas has done it twice.

As a member of the Southwest Conference the Razorbacks beat Texas 42-11 in 1981 in Fayetteville and then after joining the SEC they won 50-48 in triple overtime at LSU in 2007.

Alabama Coach Nick Saban was Michigan State’s coach in 1998, so he’s been on both sides of No. 1 getting upset by an unranked team.

Mark Stoops had led Kentucky to its first 6-0 start since 1950 — when Arkansas native Bear Bryant was the Wildcats’ coach.

“When I heard that, it did mean a little something to me, because it’s been a lot of hard work for a lot of years,” said Stoops, who has a 55-50 record in nine seasons at Kentucky. “But you don’t have a lot of time to enjoy the moment.”

“On those night games it’s a quick turnaround,” Stoops said. “You can maybe enjoy it for a few hours. Then it’s back to reality. I get to wake up the next morning and prepare for Georgia.

“So it kind of gets your head screwed on straight very quickly.”

Kentucky plays at No. 1 Georgia on Saturday. The Bulldogs are 60-12-2 against the Wildcats and have won 11 consecutive games in the series.

Ole Miss Coach Lane Kiffin will return to Tennessee — where he had a 7-6 record in his only season at the Vols’ coach in 2009 — when the Rebels play at Neyland Stadium on Saturday.

It will be Kiffin’s first time to play the Vols as an opposing head coach, but he’s had plenty of experience facing teams he previously coached.

As Alabama’s offensive coordinator, Kiffin was 3-0 against Tennessee from 2014-16, including two games in Neyland Stadium.

Kiffin, who left Tennessee to become USC’s coach, was Alabama’s offensive coordinator when the Tide beat the Trojans 52-6 to open the 2016 season at AT&T Stadium in Arlington, Texas.

“There’s two things here, one that’s a long time ago and two, we’ve done this thing,” Kiffin said of his taking on the Vols. “Played against USC and played against Tennessee and played against Alabama, so it’s not like all of a sudden, you’re going back to a place you used to coach at.”

That group of assistants is now 1-24 against Saban, including Fisher’s 1-4 record.

Adding to Fisher’s satisfaction in beating his former boss is that last summer at the Houston Touchdown Club he predicted the Aggies would beat Alabama while Saban was the coach there.

Fisher’s comment came in response to a question from a fan about whether his Aggies would have to wait for Saban to retire to beat the Tide.

But Fisher isn’t taking long to bask in the glow of beating Saban.

“This game is over with,” Fisher said Monday at his weekly news conference. “I’m tired of talking about it. It’s over.”

Beating Alabama will lose a lot of luster for the Aggies if they’re beaten at Missouri on Saturday.

“The lessons we learned [against Alabama] are wasted lessons unless we carry them on this week,” Fisher said. “[The Missouri Tigers] play really well at home. They always have.

“They’re going to be waiting for us to knock us off. This is the trap game. [Don’t] listen to all the stuff all week and live in the past. That’s over with.”

A few days before Alabama played at Texas A&M, Saban also referred to it as “a trap game” because the Aggies had lost back-to-back SEC games against Arkansas and Mississippi State.

The injuries to key players keep piling up for LSU.

On Monday, Tigers Coach Ed Orgeron confirmed sophomore Kayshon Boutte, who has 38 receptions for 509 yards with an SEC-leading 9 touchdowns, will miss the rest of the season because of a leg injury.

LSU also has lost starting senior cornerback Eli Ricks for the rest of the season, Orgeron said Wednesday, because he is undergoing surgery for a nagging injury. Orgeron wasn’t specific about the injury.

Last week junior All-American cornerback Derek Stingley announced he was foot having surgery and is sidelined indefinitely. The Tigers also are without defensive ends Andre Anthony and Ali Gaye because of injuries.

“It does make it tough,” Orgeron said of replacing so many starters. “Somebody’s got to rise up to the occasion. We’ve lost several players, especially starters on defense. We’ve got some young guys that have to step up.”

Tennessee Coach Josh Heupel is 2-0 against Ole Miss Coach Lane Kiffin, but those victories came when they both coached in Florida.

Calzada had been inconsistent taking over for injured Haynes King as the Aggies’ starting quarterback, but he put together a memorable performance in Texas A&M’s 41-38 upset of Alabama.

Calzada completed his first 10 passes and finished 21 of 31 for 287 yards and 3 touchdowns and lead a drive that resulted in game-winning field goal on the game’s final play.

The big question now is can Calzada continue to play at high level at Missouri on Saturday? If so, it might be tough for King to regain the starting job when he returns from his leg injury.

Kentucky hasn’t played in the SEC Championship Game since the conference split into divisions for the 1992 season with the addition of Arkansas and South Carolina.

The only other East team not to play in the title game is Vanderbilt.

If Kentucky ever is going to win the East, this might be the season as the Wildcats have started 6-0 for the first time in 71 years.

But Georgia is standing in the way and the Bulldogs are heavy favorites at home.

The Wildcats have lost 11 consecutive games to the Bulldogs since Kentucky last beat Georgia 34-27 in 2009 in Athens.

“If we relax against the University of Alabama, then we are the stupidest team in college football.”

“It wasn’t perfect, but we didn’t think we’d transform into the ’85 Bears overnight.”

— Missouri Coach Eli Drinkwitz on progress made by the defense in the Tigers’ 48-35 victory over North Texas.

“That’s not him, that’s all of us. You go to anybody in the SEC and they’ll tell you it’s pretty much you’re either really smart, or really dumb and there’s nowhere in between, and it’s a week to week deal.”

— Florida Coach Dan Mullen on LSU’s Ed Orgeron not being the only SEC coach who is criticized.