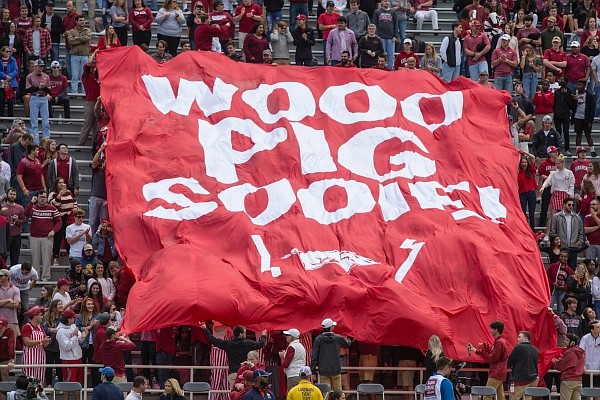 A banner is shown in the Arkansas student section prior to a game against Auburn on Oct. 19, 2019 in Fayetteville.

Selected comments this week from Razorbacks fans on the message boards at WholeHogSports.com:

Was Arkansas Coach Sam Pittman right to go for a 2-point conversion to win at the end of last Saturday’s 52-51 loss to Ole Miss?

bluegrassrazorback: Coach Sam made a decision that is decisive — it’s in his nature — he believed he could win. He is a coach that came in and carried a dead Hog on his back to respectability with the decisions he has made. I’m not going to question a leader like him whose performance gives him the credibility to do it his way … We could of had Lane Kiffin who was pooping his pants on the sideline.

wizardofhogz: I was 100% fine with the decision and I’m OK with living with the consequences (just as I was when Brandon Allen’s 2-pointer was successful).

thenotoriouspig: I’m not sure. But I had no problem with it. It gave us a good chance of winning. I would have like to have seen KJ Jefferson keep it. … Although I’m not sure it was the right call, I do think it was gutsy. … I just also think there (are) two sides to it. A one-play scenario also gives a bad defense a chance to cure some ills with one big down. Unfortunately Ole Miss did that.

coloradohog: Agree with the call. In OT, they score each and every time. Our defense had no clue. Theirs was not much better, but they did make us earn our scores. … It was our best chance to win.

SwineFusion: The call was just fine. KJ had three options. Unfortunately we failed to block people and as a result none of the three was available. I think option 1, the shovel pass, was excellent but OM blew that up. Should he have put his head down and tried to bull his way in after that? Possibly. As always, doesn’t matter what you call if you don’t block people.

cody: Going for 2 was the right call. I didn’t like the play call either. With KJ’s length and leaping ability maybe we should just run straight ahead and leap over the pile …

gashog: I loved going for it. Thought the play was kinda not the one.

goldsurfer: It’s ALWAYS a BAD call if it don’t work.

3agle09: Totally agree with going for 2. They had not stopped us most of the second half. Why put their offense back on the field? However, I totally disagree with the play call, I would have liked to seen KJ or Rocket Sanders use their legs.

MattJones: I like RPO on 2-point plays, personally. It makes the defense account for more. I thought it was the right call to go for two. Arkansas’ defense was exhausted.

razorwill: Would have kicked for tie and go to OT.

HogDoctor: Lack of defensive stops lost us this game obviously, so why could we not stop them? You score 50+ points on the road you should win.

adgebg: Believe when they look back on this our coaches will come to the conclusion that KJ was our best option to get into the end zone for the win. He would have willed his way to the end zone. Rely on his heart and determination. His coming home party would have been of monstrous size and loudness. Bad call to try the pass. Hindsight is on my side.

lovemyhawgsforever: For almost all the game, we got no pass rush. (Ole Miss QB Matt) Corral could just sit back in the pocket and do as he pleased. Blown coverages, missed tackles, bad angles and slow responses from our linebackers and secondary didn’t help. Neither did giving up 3rd and 10 and not stopping them on 4th down.

razorwill: Offense played plenty well enough to rout that team. If we’re multiple on defense then I can leap tall buildings. You score over 50 points on a team without getting turnovers, big special team plays, etc. and lose, some questions need to be asked of defensive coaches.

tuschawg: I think scheme-wise, we placed more priority on stopping Corral’s passing than their running game, thinking we could bend on the running game and minimize their yards. Did not happen. And that is scary for good teams with good QBs in coming games.

armyhog: It’s hard to understand but injuries are catching up to our defense. Depth, or the lack of, in a few positions. Recruiting is the only way to improve. We are experiencing another year where the walking wounded are fighting and doing their best. It’s hard to get a stop when you can’t wrap up to tackle.

dixiepig: Can some one explain how so many of Ole Miss receivers were wide open? I can understand one maybe missed assignment but they had several.

ClayHenry: I think it was explained in my story. Hayden Henry said the stretch play was a situation where the safeties are asked to take one of the gaps. They were not getting there, or getting there late. Same issue against Georgia. The soft spot where you invite the run is played by a back end player. Most teams … ask a safety to be part of the run fit. The danger of the pass slowed them down on some of the run fits by the safeties. The pass hit them when they did read run on a fit and didn’t cover. When you play zone, you are also playing run. That’s a problem with an offense (like Ole Miss or like Arkansas) that offers the run-pass option with the quarterback. When these two QBs are rolling with their reads, the defense is going to be wrong a lot. Saw that all day on both sides. Remember, someone has to account for the QB at all times in these two offenses. … So you subtract one defender to account for the QB. Makes you wrong sometimes. …When Corral handed off and moved away, often times, there was a second line player moving his direction. If he’s leaving a gap, that’s where the back goes.

Fans predict the outcome of Saturday’s game against Auburn

neastarkie: I listened to Clint Stoerner on the radio. He thinks Bo Nix is nowhere near the QB Corral is although he thinks the AU defense is better than OM’s. Overall, he thinks we’ll win. Even though he’s one of us, I think he’s a pretty straightforward analyst. I’ll go with it and my own heart and say: Hogs 34, AU 21.

jmetsrule: I think we end up in another game of offense, but we win this one outright in the back end of the 4th quarter. Arkansas 42, Auburn 38.

stillgreghog: Even after the Texas game, I had this down as a loss. Not any more. Hogs 37, Plainsmen 17. By the way, major discussion last week as to if the Ole Miss game was a “must win” game. I said no. I am not saying this week’s game is a “must win” but it is much, much closer to being a “must win” game. We need this one, real bad!

Rpalm: I think this is a win, especially at home with our fans trying to help our team.

gentryrzrbk: Our super seniors on defense refuse to allow the defense to be the laughing stock for another game and gather three turnovers — two interceptions and a fumble recovery. Jefferson and Burkes score a combined four touchdowns. Arkansas 55, Auburn 24.

LDhog: After last years screwing I believe our fans and team will come out with fire in their eyes. We win big. Hogs 48, AU 14.

generalhog: Arkansas 70, Auburn 0. Jefferson on the victory formation runs towards Nix on the sideline and spikes the ball backwards towards him.

bluegrassrazorback: Hoping for the Ark offense that was at Ole Miss and the Ark defense that throttled Texas (spit). The crowd confuses the Auburn offense and Auburn’s protecting angels in the SEC refs. Ark 37, Cash bag guys 24

razorwill: They will keep us just enough off balance with their offense. Bixby ends up with 150-plus. Defensive scheme has holes and we are wore down and beat up. Unfortunately, Auburn 27, good guys 24.

hawgring: Razorbacks win 31-20. The defense does a better job of wrapping up on their tackling. I’m hoping Jalen Catalon’s injury allows him to start hitting again when a safety is needed to clean up a run or reception in his area.

silverlakehog: Which pro-Auburn refs will be calling the game? That would influence my prediction.

cody: The good guys win this week. We are at home and the refs will give us a few no-calls as makeup for last year. Besides, we are seen nationally as a darling, feel good story. No longer a bottom feeder. Our defense comes out from hiding enough to slow down the Tiggers. Our offense will take a step back, but not enough to matter. Hogs 31, AU 20.

lilhawg: Wish I was as confident as some of you. Nix is a very good scrambler and I fear will give us fits. In spite of that, the Hogs pull out a close one 24-21.

suigeneris: Tank Bigsby goes for 100 and two TDs against a defense configured to stop him, but KJ and company won’t be denied when it counts. Hogs 31, Tigers 24.