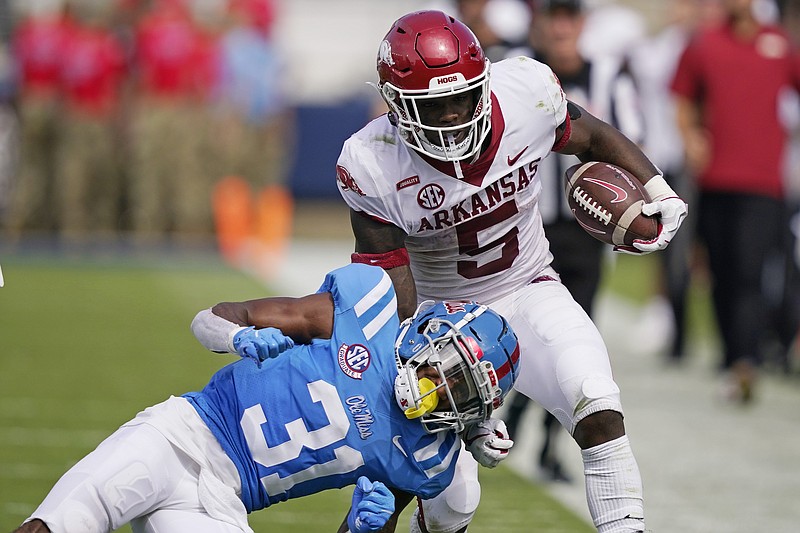 Arkansas running back Raheim Sanders (5) is knocked out of bounds by Mississippi defensive back Jaylon Jones (31) during the second half of an NCAA college football game, Saturday, Oct. 9, 2021, in Oxford, Miss. Mississippi won 52-51. (AP Photo/Rogelio V. Solis)

FAYETTEVILLE — Raheim “Rocket” Sanders became the first University of Arkansas freshman to rush for more than 100 yards against an SEC opponent in five years when he had 17 carries for 139 yards at Ole Miss last week.

Not bad considering Sanders signed with the Razorbacks to play slot receiver.

“He’s an SEC back,” Arkansas senior linebacker Grant Morgan said. “He’s got really good speed, but he can run downhill. He runs really hard and doesn’t go down usually with the first guy being able to get there with him.

“We don’t do a lot of live tackling all the way down to the ground right now, but when we thud him up we feel him. He challenges us in the pass game, too, because he runs good routes.”

The last Arkansas freshman to surpass 100 rushing yards in an SEC game prior to Sanders was Devwah Whaley, who had 19 carries for 112 yards in the Razorbacks’ 58-42 victory at Mississippi State on Nov. 19, 2016.

Sanders said he wasn’t surprised by his breakout game against the Rebels.

“Because when it comes down to it, it’s like our practice,” he said. “If you’re going to execute in practice, it’s going to show in the game.”

Ole Miss beat Arkansas 52-51 and Sanders suffered the Razorbacks’ first lost fumble this season, but his impact was notable.

Along with leading Arkansas in rushing, Sanders had three catches for 26 yards.

Sanders has 54 carries for 324 yards along with 4 receptions for 48 yards going into today’s Arkansas-Auburn game at Reynolds Razorback Stadium.

“As an offensive lineman, it’s fun watching a running back run so hard,” said Ty Clary, a senior expected to start at tackle today in place of injured Dalton Wagner. “He’s running great.

Razorbacks Coach Sam Pittman said Sanders was recruited to play slot receiver, but he was moved to running back before spring practice after being a January enrollee.

“We felt like we needed some help at running back,” Pittman said.

Sanders has provided it.

“I certainly believe spring helped him,” Pittman said. “I think you can see how much more comfortable he is each week and hitting holes faster and learning how to make different moves and things.

“I’ve been really pleased with him.”

The 6-2 Sanders, who weighed 210 pounds when he arrived at Arkansas, is now up to 225 to better absorb the hits he takes at running back.

“He’s 225 pounds and has speed,” Pittman said. “So he’s what you want at running back. We just didn’t know that in recruiting.”

Sanders played running back, receiver and linebacker at Rockledge (Fla.) High School, where he was rated a 4-star recruit.

“Going through the college recruiting process, talking to all the coaches, I believed in Coach Pitt, and I told him straight up I’ll play any position,” Sanders said on Pittman’s weekly radio show. “I just want to play. It doesn’t matter how many [plays] I get.

“At the end of the day, playing at Arkansas, I feel like they’re using me well. I definitely feel like I can play any position. You’ve just got to have the heart for it.”

Sanders said on the radio show that he doesn’t want to think too much when he’s playing.

Pittman said Sanders has done a good job of learning from running backs coach Jimmy Smith and improved at quickly hitting a hole when the opportunity presents itself in the Razorbacks’ zone running scheme.

“Jimmy’s done a really good job in individual [drills] with, ‘Next hole, next hole next hole,’ ” Pittman said. “Because zone’s about, ‘Where’s my read? Is it there?’

Sanders had 8 carries for 44 yards against Rice in this season’s opener, then 8 for 50 against Texas, 10 for 43 against Georgia Southern and 6 for 27 against Texas A&M. Georgia held him to 21 yards on six carries, but he bounced back in a big way at Ole Miss.

Along with Sanders and Whaley, other Arkansas freshmen to rush for 100 or more yards against an SEC team the last nine years are Alex Collins (14 carries for 116 yards against Texas A&M in 2013) and Rawleigh Williams (14 for 100 at Tennessee in 2015).

“Glad he’s on our team,” Morgan said of Sanders. “The fact that he’s a true freshman, and playing the way he’s playing, he’s got a really good future ahead of him.”

Sanders became the Razorbacks’ No. 2 tailback behind junior Trelon Smith with a strong showing in preseason camp.

“I’m really proud of Rocket,” Pittman said. “He’s a good player now. He’s going to be a really good player for us.”

“Anybody he comes in contact with is really impressed by him as a young man.”