Home-field hype: Pittman calls on fans to help with another early kick 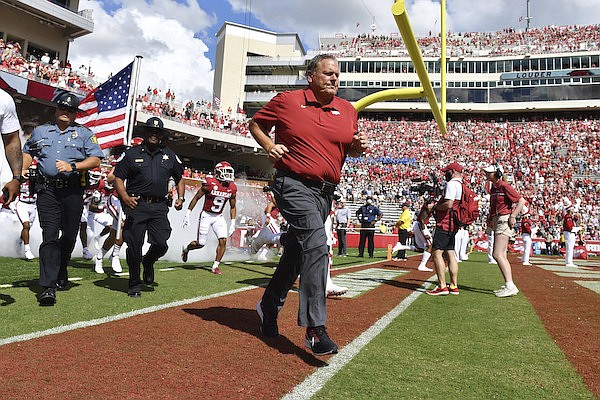 Arkansas coach Sam Pittman leads his team onto the field to play Georgia Southern during the first half of an NCAA college football game Saturday, Sept. 18, 2021, in Fayetteville. (AP Photo/Michael Woods)

FAYETTEVILLE — Sam Pittman was so impressed by the intensity and volume level of Georgia fans for an early kickoff a couple of weeks ago he has referenced the “110 decibels,” the ear-splitting sound and the distinct home-field advantage several times since.

The University of Arkansas’ second-year coach has appealed all week to fans to show up early and be similarly loud for today’s 11 a.m. game against Auburn (4-2, 1-1 SEC) at Reynolds Razorback Stadium.

Pittman, who announced the game was a sellout on Wednesday, signed off his radio show that night with this promise: “Georgia’s fans made a difference and I guaran-damn-tee you we will too on Saturday.”

Protecting the home turf is innate and territorial and absolutely necessary for teams with championship aspirations.

Now riding a two-game losing streak that has seen the Razorbacks remain the highest-ranked two-loss team in the country, their aspirations for a lofty finish in the brutal SEC West have hit this crossroad.

Beat Auburn in today’s homecoming game and keep alive the idea that the top of the West is in reach the next two months. Lose and it’s a deeper hole in the SEC basement for the Razorbacks, no matter the respect they’ve earned and the obvious major steps they’ve taken in 16 games under Pittman.

And that’s where the crowd comes in.

Arkansas is 3-0 at Razorback Stadium, and 4-0 in “home” games this year with the win over the Aggies in Arlington, Texas, factored in.

Pittman visited with representatives of fraternities and sororities in an effort to boost early attendance, and he’s promised a salute to the students when he enters the stadium at 10:05 a.m.

The Razorbacks recognized the role the crowd played in a 41-20 win over Texas in Week 2 that vaulted Arkansas higher into the college football conscience.

“When we played Texas here our crowd was as good as any crowd that you could ever hope for,” Pittman said. “We need that crowd again. We need our students in here raising heck early before the game. I’m just telling you the football team needs the fans, and we need them to come in here and help us win on Saturday.”

Pittman has concerns about injuries that have mounted seven weeks in that could impact every level of the defense.

Star safety Jalen Catalon, dealing with multiple injuries and not at practice early this week, is doubtful, and he could be out for a while, after falling on his shoulder last week while playing with a broken hand.

Catalon discussed his injury situation briefly on KABZ-FM, 103.7, in Little Rock during his weekly appearance on Friday, saying, “I’m dealing with a couple of injuries, but I’m trying to fight through it right now and do everything in my power to play. I should be fine to go.”

Offensive tackle Dalton Wagner is out for a while with a dislocated finger that required surgery, and several other key players are ailing.

“It’s kind of expected to be honest with you when you’re headed into the seventh week in the season in a row,” Pittman said. “Of course Auburn is too, but you are going to have a little bit of bumps and nicks and things of that nature. We’ve got our fair share of them right now.”

The Razorbacks discussed the home crowd impact this week.

“I feel like the crowd’s a big factor,” nickel back Greg Brooks Jr said. “It’s definitely going to get us pumped up since we have an 11 a.m. game.”

Said sixth-year offensive lineman Ty Clary, “The Texas game, which was sold out, was probably the loudest that stadium has been since I’ve been here. Definitely, it affected the game.

“They were loud enough to impact their offense a little bit. We definitely got energy off it.”

“At the end of the day, if that can cause problems for a different offense. I know it did for our offense when we went to Georgia. It didn’t matter if it was at 11 a.m. or 6 p.m., a crowd can make a difference, and I know our crowd will this weekend.”

Arkansas had three false starts and an illegal snap on offense at Georgia, strong indications that noise and atmosphere impacted the Hogs’ focus.

The Razorbacks have not had a clean sheet at home since 2011, the last year they were a factor in the SEC West standings. That Arkansas team walloped Auburn 38-14 at Razorback Stadium en route to an 8-0 “home” record and a 6-0 mark on campus.

Since then, the Tigers have won seven of nine in the series, including five in a row, with a 3-1 record at Razorback Stadium.

Former Auburn Coach Gus Malzahn was 7-1 against the Razorbacks, the only loss coming in a 54-46 four-overtime thriller here in 2015. That represents Arkansas’ only win in the series dating back to a 24-7 upset at Auburn on Oct. 6, 2012.

“I think being on the road in general prepares you to go back on the road,” Harsin said. “The Penn State game was the first road game we had as a team. Not to mention the environment. That’s part of it.

“Obviously away you deal with the crowd noise. You deal with the travel. So to me, it’s more about how we travel and how we have ourselves ready leading up to that travel date. How we handle ourselves when we’re in a different environment, different bed, those types of things.

“And then come game day, we’ve got to be able to handle the noise and the environment every time we go on the road.”

Pittman and company have already tossed aside some major burdens on the Arkansas program during his first season and a half. The Razorbacks snapped a 20-game SEC losing streak with a 21-14 win at No. 16 Mississippi State in Week 2 last year. Two weeks after that, they broke a 12-game skid in home conference games with a 33-21 win over Ole Miss.

The win over Texas A&M at AT&T Stadium three weeks ago broke a nine-game skid against the Aggies.

Auburn’s current five-game winning streak is the longest in the series with the Razorbacks. The Tigers owned a one-game edge over the Razorbacks at 11-10-1 after Arkansas won the 2012 game on The Plains in Gene Chizik’s final season.

Beating this Auburn team looks like a chore. The Tigers have scored at least 30 points in eight consecutive games against the Razorbacks and 40 or more in five of the last seven.

After the first 25 games in the series, Auburn had outscored Arkansas by a total of 633-629, an average differential of just 0.16 points per game. During Auburn’s five-game winning streak, the scoring differential is 223-64 for an average score of 45-13.

Harsin recognizes getting a second-consecutive SEC road win will not be easy.

“As you look at Arkansas, tough, physical, those two things stand out,” Harsin said. “The coaches do a very good job. They’re two points away from being 5-1 and they’re playing aggressive. Those things all stand out. There’s a lot of really good players on their team.

“As you look at Arkansas, in my opinion, they’ve done a very good job up to this point and you can see that within their team.”