How we see it: Arkansas-Auburn predictions 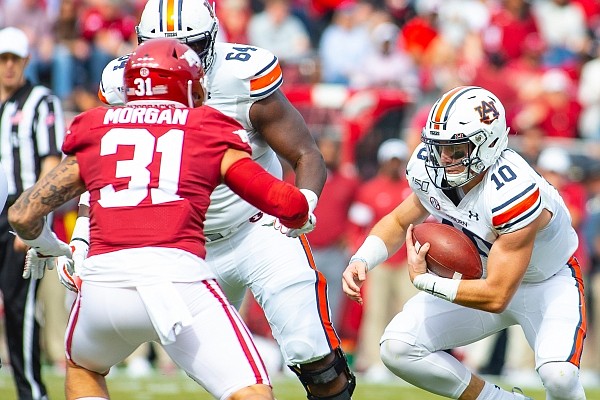 Auburn’s offense is less of a threat for a beat-up Arkansas defense. KJ Jefferson gives Arkansas the clear edge at quarterback. That’s a winning combination. Arkansas, 31-17

Both teams showed they were no match for Georgia, but this looks like a pretty even matchup. Getting to 5-2 will be big for the winner. Arkansas, 27-24

Arkansas has faced college football’s best defense and maybe its best offense the last two weeks. The Razorbacks should fare better against a team that is not as complete on either side of the ball. Arkansas, 31-21

The Razorbacks will be the beneficiary of Auburn coming off of a physical home loss to Georgia. Arkansas will carry some offensive momentum from the Ole Miss game and perform well. It will come down to whether or not the Razorbacks can limit Bo Nix’s impromptu playmaking. I think they can. This has the makings of another classic. Arkansas, 28-24

Another “bounce back” 11 a.m. try for the Hogs and the pressure to avoid a three-game skid feels strong. Getting Treylon Burks more first-half opportunities is the key. Arkansas, 30-24

For the first time in Sam Pittman’s tenure, the Razorbacks face more pressure to win than their SEC counterpart. KJ Jefferson leads Arkansas back on track, avoiding a 3-game skid. Bo Nix continues to take a beating in the SEC. Arkansas, 45-27

Arkansas’ offense played plenty well enough to beat Ole Miss. The defense struggled, though, against one of the country’s best attacks. A much-needed return to Fayetteville will get the Hogs back on track against an Auburn team coming off a loss to Georgia. Arkansas, 27-21