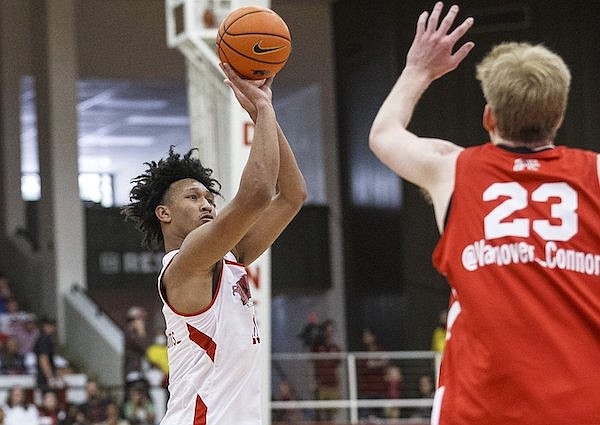 FAYETTEVILLE — Here are a handful of thoughts, takeaways and observations from the White team’s 74-63 victory over the Red team inside Barnhill Arena on Sunday:

• Stanley Umude has the potential to be a star

In his first appearance in front of Razorbacks fans, South Dakota transfer forward Stanley Umude turned in the kind of performance that makes me think he is a player who can lead Arkansas on the offensive end in 2021-22.

In his 30 minutes, 55 seconds on the floor for the Red team, he knocked down 6 of 14 shots — including 3 of 6 attempts beyond the arc — for 16 points and grabbed 11 rebounds. Four of those rebounds came on the offensive end, which is a big plus.

He capped a solid all-around game with five assists.

The Razorbacks knew when they signed Umude this spring that he was one of the top scorers in college basketball for the Coyotes and a more-than-capable rebounder. Those two elements of his game alone are enough to make him an All-SEC caliber player.

If he consistently showcases vision like he did Sunday and is able to defend multiple positions effectively, he can be a bonafide star for Arkansas. Although he was one of the more high-usage players in the country at South Dakota last season, he did post a career-high assist rate (21.0%).

“The game comes easy for him scoring at times,” Arkansas coach Eric Musselman said. “The assists become really important. And again, when we watched film of him playing at South Dakota, I thought that when he wasn’t scoring it, he has the ability to make some really good passes and some really good reads.

“The more that he continues to understand good shot from great shot, we’ll be able to play through him a little bit more because he can be a high-assist player, which I think is really important.”

In his press conference previewing the Red-White game, Musselman noted that the sophomore forward would be limited as he continues to recover from an old ankle injury that he re-aggravated prior to the first official practice of the preseason.

In pregame warmups you could tell Williams was fired up to play in the scrimmage. He was vocal, smiling and bouncing around with a lot of energy.

After his White team got off to a sluggish offensive start, he helped pull it out of that funk and played extremely well.

Musselman noted postgame that the plan was to play Williams just five minutes in the second half because of the injury, but also because he is not in great shape yet. The staff did not want to risk further injury as a result of him being exhausted.

So when he was on the floor for his 22 minutes, he made an impression. He finished with 12 points, 7 rebounds and 2 assists.

Most impressive was his perimeter shooting and the way he talked to teammates defensively, calling out screens and relaying what he was seeing while often deep in the lane.

Williams confidently and without hesitation knocked down 2 of 3 three-point attempts in the first quarter and scored eight of White’s 13 points. Musselman said Williams has improved as a threat beyond the arc.

Bringing that dimension to the floor on a more-regular basis would make the Razorbacks really tough to defend 1 through 5. And we know he is also one of those somewhat rare bigs who is comfortable handling the ball on the perimeter and taking a slower-footed defender off the bounce.

Williams is one of Arkansas’ returning players I am most eager to watch this season. If he can get in game shape and take the next step after a good freshman year, it bodes well for the Razorbacks.

• I could watch Jaxson Robinson shoot the ball all day long

There are certain players who you just really enjoy watching shoot the basketball from distance. What catches the eye might be their quick release, their form or how they are consistently shot ready.

You know it when you see it. And for me, Robinson is one of those guys.

Having seen him twice now — in the Razorbacks’ first practice of the preseason and again Sunday — I believe he can be a key contributor. He played a big role in White’s comeback against Red, scoring 14 points on 5 of 11 shooting and 4 of 9 from three-point range as a complement to JD Notae.

Where I think he can be his best is complementing players like Notae and point guards Davonte Davis and Chris Lykes. Robinson has a way of making the game easier for ball handlers because he finds open spots so well in transition and is low maintenance.

Robinson doesn’t strike me as a player whose energy and effort will nosedive because he is not getting a certain number of looks. His attempts will come in the flow of the game.

And like Umude, he has learned the Razorbacks’ offense, Musselman said. While some newcomers are a bit behind in that regard, Robinson has transitioned well and given himself a real chance to be a productive piece on a winning team.

• JD Notae did a great job leading his White team

Looking at the rosters for the Red and White teams ahead of the scrimmage, Red had the overall talent advantage and would likely walk out of Barnhill Arena the winner.

Notae wasn't having it.

He scored a game-high 22 points on, for him, an efficient 9 of 18 from the floor, including 4 of 12 from deep. The primary ball handler more often than not on a team that also featured Lykes, Notae led well and kept teammates fairly involved.

He did turn the ball over four times, but his six assists were a game high. In the second quarter that turned the tide of the game, Notae added only two of White’s 19 points, but had a pair of assists, setting the table on a Williams dunk and a three-pointer by walk-on Cade Arbogast.

Defensively, he was solid with four steals. Notae has loads of potential on that end as well, evidenced by steal rates, according to KenPom data, that ranked in the top 101 nationally each of the last two seasons.

The 6-1 guard had a terrific offseason, developing his body more than any other player Musselman has coached at Arkansas. Sunday was the first time we got to see all of his late nights and early mornings pay dividends.

I agree with Musselman: Notae looks focused on having a big year and able to lead in multiple ways, not just scoring the basketball.