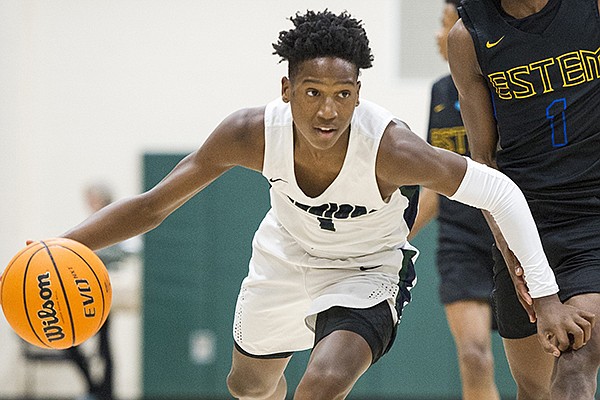 Little Rock Christian guard Layden Blocker (1) dribbles down the court during a game against E-Stem at the Wildcat Classic Championship game in Little Rock on Saturday, Dec. 28, 2019.

Class of 2023 Arkansas target Layden Blocker has narrowed his list of schools to seven, and Arkansas is included.

Blocker, 6-2, 170 pounds, of Bellaire (Kan.) Sunrise Academy, averaged 20 points, 5 rebounds, 3 assists and 2 steals per game as a sophomore at Little Rock Christian before transferring to his current school.

He announced Arkansas, Memphis, Baylor, Kansas, Gonzaga, Auburn and Oklahoma State as his top schools on Sunday. All but the Cowboys were ranked in The Associated Press Top 25 that was released Monday.

He had other offers from schools such as Oklahoma, Ole Miss, Texas A&M, Tennessee and Wichita State.

“Arkansas made my top seven because of the relationship, environment and coaching,” Blocker said. “They do a great job communicating and building a relationship to make me feel like a priority. They have a strong fan base and good environment.

"The coaches are experienced and know the game at a high level. Their NBA experience can help to develop a player like myself to be a one-and-done.”

Blocker, who played for 16-under Bradley Beal Elite during the spring and summer, was a standout at the recent Wootten Camp Top 150 in Mansfield, Texas.