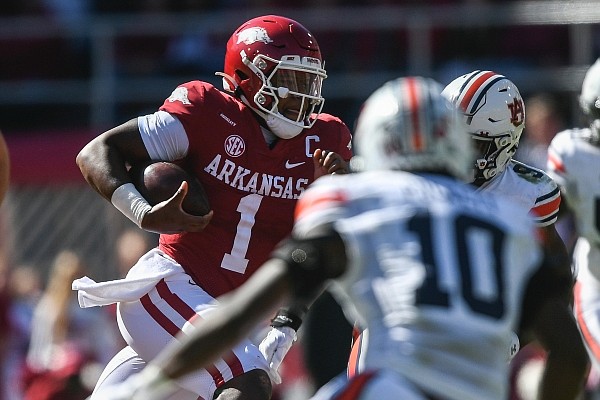 Arkansas quarterback KJ Jefferson carries the ball Saturday, Oct. 16, 2021 during the second quarter of a football game at Reynolds Razorback Stadium in Fayetteville.

FAYETTEVILLE — Below is an analysis of Arkansas quarterback KJ Jefferson’s ninth career start after a re-watch of the Auburn game:

Best throw: KJ Jefferson’s 30-yard touchdown pass to Treylon Burks on his first attempt of the second half was him at his best. Though he struggled a bit with accuracy down the field against the Tigers, Jefferson placed this ball in the end zone where only Burks could get it. Burks high-pointed the throw and gave the Razorbacks a lead.

Worst throw: Jefferson’s fourth attempt of the game was a near interception in Auburn territory. He was looking to feed the ball to Ketron Jackson 13 yards downfield, but a Tigers defender jumped the route. Had the ball not been low, it would have been picked off.

• Incomplete pass intended for Warren Thompson 41 yards downfield near the end zone. Ball was wide and into the sideline.

• Incomplete pass intended for Morris 11 yards downfield. Ball was behind the receiver.

• Incomplete pass intended for Jackson 13 yards downfield. This was Jefferson’s first attempt that could have been intercepted but was not since Week 2 against Texas.

First-down throws on third down: 4

First-down runs on third down: 3

Analysis: All who watched Arkansas’ 38-23 loss to Auburn saw a quarterback in Jefferson who was not 100% on his game, as crisp as he has been in a number of Arkansas’ wins or even in the Razorbacks’ loss at Ole Miss. Simply, he missed throws that he usually hits with relative ease, and his reads in the RPO game were not as sharp as we’ve grown accustomed to seeing.

A couple of times, too, he made inaccurate throws on plays in which he could have tucked the ball and surged for first-down yardage. I found that uncharacteristic.

Jefferson completed 21 of 35 passes for 228 yards and 2 touchdowns in the loss and also led Arkansas in rushing with 66 yards on 18 carries. He was asked to do a lot against a defense that is talented and maybe came in a bit under the radar. There are solid, physical defensive players at all three levels, and the Tigers’ secondary has some real playmakers.

The redshirt sophomore has not had to throw the ball away much this season. He’s been able to locate targets and put throws in their vicinity much more often than not. Auburn forced 2 throwaways. Jefferson also hasn’t had an inordinate amount of passes broken up this season. The Tigers knocked away 4. And he threw a rare interceptable pass, too, his first in several weeks.

Arkansas’ down-the-field passing game was a bit limited relative to previous games. Jefferson finished 2 of 6 on throws 16-plus yards at depth, and the 45 total yards on those attempts were the second fewest in a game this season, ahead of only the Georgia game (0 yards on 2 attempts). He did complete 15 of 21 passes at or behind the line of scrimmage to 10 yards downfield, but Arkansas lacked real explosion in those areas. No reception went for more than 19 yards.

I thought Jefferson was pretty effective on third down. He moved the chains 4 times on third down with the pass and 3 more times with his legs. Running the ball on the down was most impressive. Jefferson picked up more than 50 yards on three third-down scrambles. And 3 of his 4 conversions with the pass netted 15-plus yards, 2 when facing third-and-8 or greater.

Following a grueling 4-game stretch that included 3 ranked teams, Jefferson’s body is likely aching, and the Arkansas-Pine Bluff game and bye week could not have come at a better time. He simply needs rest and time to recover both physically and mentally.

We saw for possibly the first time last Saturday some real frustration from Jefferson. Facing an FCS opponent in the Golden Lions that have allowed an average of 413 yards and 32.7 points over 6 games, he should be able to regroup, produce, get a head start on the open week and give way to Malik Hornsby and other backups who can take a lot more from a game like Saturday than he can.