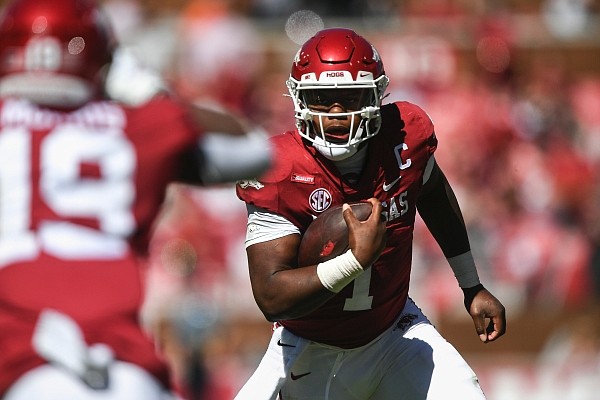 Arkansas quarterback KJ Jefferson carries the ball on Saturday, Oct. 16, 2021 during the third quarter of a football game against Auburn at Reynolds Razorback Stadium in Fayetteville.

Jefferson accounted for 411 total yards and six touchdowns in front of dozens of friends and family members during the Razorbacks’ 52-51 loss to the Rebels in Oxford, Miss., less than an hour from his hometown of Sardis, Miss.

The 6-3, 245-pound sophomore took several shots in that game, including landing on his upper back and helmet in the end zone after a 6-yard touchdown run.

Jefferson was not as sharp nor as clean with his decision making against Auburn.

“I thought Saturday that there was times when he played really slow,” Pittman said. “I think the Ole Miss game banged him up quite a bit.”

Arkansas had 93 offensive snaps at Ole Miss and 89 against Auburn for a total of 182, while the Rebels and Tigers combined for 131 offensive plays.

“Even though he’s a big man, you still get hit,” Pittman said. “That’s part of the beast and part of the nature to playing the position in this offense. It’s part of it. But we played a lot of plays over the last two games.

Pittman countered with the fact that Jefferson is in his first year as a starter and some ups and downs are expected.

“It’s like any of these freshmen, you go out there and you’re going pretty good and then you hit that wall a little bit,” he said. “He may have done that a little bit. We certainly have gone through the, to me, toughest stretch there in college football. He hung tough with it and those things, but I think he needs a little bit of a rest as well.”

If a skeleton passing period on Monday is any indication, defensive coordinator Barry Odom and cornerbacks coach Sam Carter are giving younger players more opportunities in the secondary.

The Razorbacks had a defensive backfield consisting of nickel back Jayden Johnson and safeties Joe Foucha, Myles Slusher and Malik Chavis along with corners Montaric Brown and LaDarrius Bishop during the passing drills against the scout team.

The freshman Johnson had an early interception during the work, and linebacker Bumper Pool had a pass breakup over the middle.

Converted tight end Landon Rogers got open down the deep middle and caught a would-be touchdown from fellow freshman Lucas Coley against coverage from Brown during the period.

Greg Brooks Jr., a third-year starter at nickel back, came in with the second group, along with Simeon Blair, Nathan Parodi and Zach Zimos at safety with corners Hudson Clark and Khari Johnson.

Brooks had an interception early in the period.

When the first group returned, Bishop and Slusher had picks on back-to-back plays.

Defensive lineman Markell Utsey was not seen during the viewing period on Monday. Utsey, who missed the loss to Auburn, would have the opportunity to play in his hometown on Saturday if he can recover from injury in time.

Linebacker Grant Morgan wore a brace on his left knee as the Razorbacks worked out in spider shoulder pads and shorts.

Tight end Trey Knox, who played a limited role last week after suffering what looked like an ankle injury at Ole Miss, was not in a green no-contact jersey, but he spent parts of the workout observing position mates on the sideline.

“He had some slight tears in his labrum in the front and the back,” Pittman said. “Surgery went well. He’s already been in the facility and went to Wal-Mart to get his meds. So he’s doing well.”

Catalon had limited participation from early in camp after injuring his shoulder, then he suffered a broken hand during the Razorbacks’ 20-10 win over Texas A&M. It was clear the nature of his injuries impacted the tacking force the native of Mansfield, Texas, had shown during a fantastic redshirt freshman season.

Pittman said he was hopeful Catalon, who is draft eligible, would return for his junior year.

Offensive tackle Dalton Wagner should be back in a couple of weeks, Coach Sam Pittman said.

Wagner had surgery last week to repair a dislocated finger after missing the road game at Ole Miss on Oct. 9. Ty Clary has started the last two games at right tackle in his place.

“He’ll return for sure,” Pittman said. “I anticipate he’ll be back for Mississippi State.”

The Razorbacks host Mississippi State on Nov. 6 after an open date.

Coach Sam Pittman would not go into details about why Dominique Johnson started at tailback on Saturday, but he suggested the sophomore could have an increased load.

“The only disappointing thing to me … is I don’t think we’re getting Dominique Johnson the ball enough,” Pittman said. “Every time he seems to run the football, good things happen. To me, he probably has to double his load, what we’ve been giving him, because he’s proven that he’s a really good player.”

Coach Sam Pittman gave some insight into what next week’s open-date practices might look like after saying on Saturday that the open date can’t arrive soon enough for his beaten-up team.

“Then we’ve got four games left, and two of them are at home. I think we can make a run, and I think we will. But we’ve got to get healthy, starting today. Hopefully we’ll be fortunate enough to win this game on Saturday and then have some more time off as well.”

Auburn quarterback Bo Nix was chosen one of the Manning Awards “stars of the week” and was a member of the Davey O’Brien Award’s “great high” after his performance against the Razorbacks.

Nix completed 21 of 26 passes for 292 yards and 2 touchdowns, rushed for 42 yards and a touchdown and had a pass efficiency rating of 192.8 against the Hogs.

Auburn defensive end Colby Wooden was named an SEC co-defensive lineman of the week after facing the Razorbacks. The 6-5, 278-pound sophomore finished with four tackles, including a career-high two sacks, in the Tigers’ 38-23 win at Arkansas.