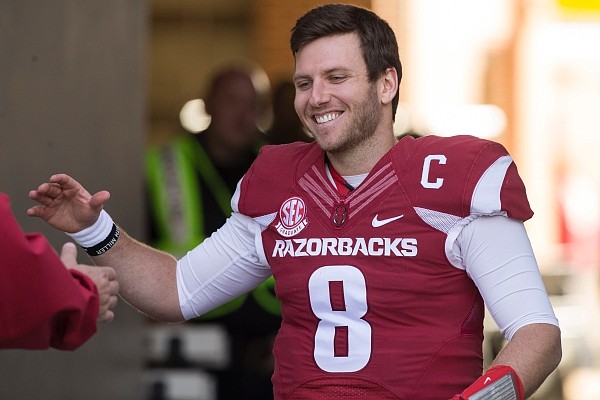 FILE — Austin Allen is shown during recognition of senior players before a game against Missouri Friday, Nov. 24, 2017, at Reynolds Razorback Stadium in Fayetteville.

Austin Allen’s return to the Little Rock Touchdown Club wasn’t as the star quarterback. It was as the retired quarterback.

And roughly two and a half years after taking his last snap in a game, Allen said there are no regrets.

“I am very at peace,” Allen, the club’s guest speaker, said following the weekly question-and-answer session Monday afternoon at the DoubleTree Hotel in downtown Little Rock. “I really enjoy what I do. Really enjoy my life, I think, is why I’m so at peace with it. Do I wish I was still playing football? Absolutely.

"But I have a great fiancee. Can’t wait to marry her. I love where I’m living. I like my job. I have really no regrets. I kind of took it as far as I possibly could.”

Allen’s ride, most notably, included stops at Fayetteville High School, where he led the Bulldogs to Class 7A state championships in 2011 and 2012 and the University of Arkansas, starting 21 games his final two seasons (2016 and 2017) and finishing among the school’s all-time leading career passers with 5,045 yards.

Allen, 27, was named the Little Rock Touchdown Club’s Class 7A Player of the Year in 2012 – his senior season at Fayetteville – and its Razorbacks’ Most Valuable Player in 2016. Allen’s ride continued as a professional when he was selected by Salt Lake City in the third round of the Alliance of American Football League’s “Protect or Pick Quarterback Draft” in November 2018.

“They paid us really well, I would say that,” Allen said. “That was one draw for a lot of the guys who were on an NFL roster the year before. They were talking about it could be practice-squad type money. For me, I would have done it if they didn’t pay. I was trying to live out the dream — one more opportunity.”

The ride abruptly ended after the AAF went bankrupt in April 2019, folding eight games into its inaugural season.

“It was one of the most fun times I’ve had playing football in my life,” said Allen, whose older brother, Brandon, is a quarterback for the NFL’s Cincinnati Bengals. “I don’t want to say it brought me back to high school, but mentally-wise, it was just going out there and having fun and trying to be the best quarterback you could be.

"Some of the guys, still to this day, we have about eight guys on that team that are still on an NFL roster, eight to 10 guys. There was just so much talent in the league. It was just really the last shot for everyone.”

Approximately a month after the AAF folded, Allen said he was contacted by the Chicago Bears to attend a rookie mini-camp tryout and believed he played well enough for another NFL camp shot (he was with Tampa Bay coming out of Arkansas), but nothing materialized.

Allen’s life now revolves around fiancee Payton Lyon and his employer, Travelers Insurance. Allen and Lyon, a former member of the Arkansas pom squad, are to be married in May. Allen, who resides in Leawood, Kan., a suburb of Kansas City, Mo., joined Travelers in November 2019 and is an associate account executive (bond and specialty insurance).

Allen graduated from Arkansas in December 2016 with a bachelor’s degree in supply chain management and said he’s six hours short of his master’s degree in recreation and sport management.

“Right now, I’m very content,” Allen said. “Love what I do. I’m happy. Once I’m not happy with it, then I’ll look at something else.”