Gafford agrees to extension with Wizards 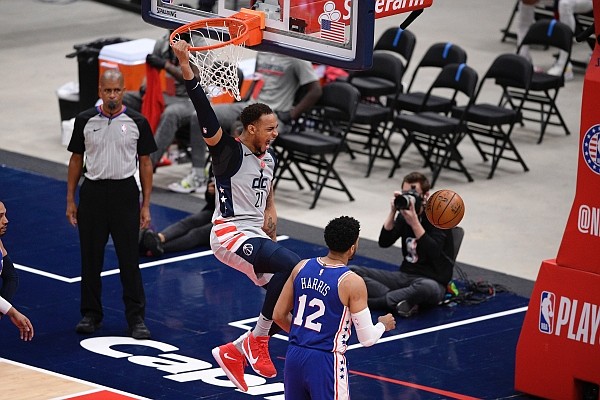 Washington Wizards center Daniel Gafford (21) hangs from the rim after a dunk next to Philadelphia 76ers forward Tobias Harris (12) during the second half of Game 4 in a first-round NBA basketball playoff series, Monday, May 31, 2021, in Washington. (AP Photo/Nick Wass)

Former Arkansas forward Daniel Gafford has agreed to a contract extension with the Washington Wizards, according to a report.

Shams Charania, an NBA insider for The Athletic and Stadium, reported late Monday that Gafford’s deal is for three years — through the 2025-26 season — and worth $40.2 million.

A second-round pick of the Chicago Bulls in the 2019 NBA Draft, Gafford played 31 games for the franchise last season before being traded March 25 to Washington, where he blossomed in an increased role.

At Arkansas, the 6-11 forward put up 14.3 points and 7.4 rebounds in 67 career games. The El Dorado native was an All-SEC selection and all-league defender in his final season with the Razorbacks.

Washington, with Gafford as its projected starting center, is scheduled to open the 2021-22 season Wednesday against the Toronto Raptors. The Wizards’ road game against the Brooklyn Nets on Monday, Oct. 25 will air on NBA TV at 6:30 p.m.