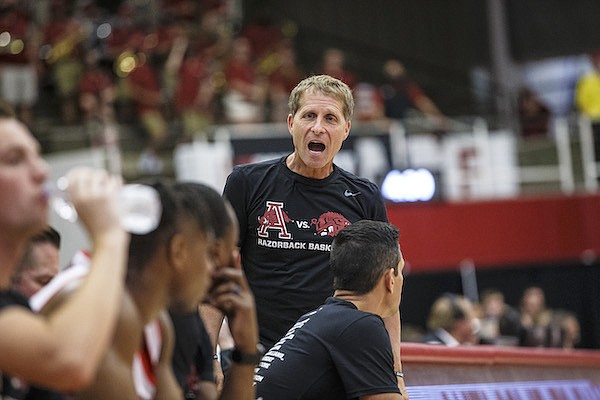 FAYETTEVILLE — No video or radio feed will be available for Arkansas’ basketball exhibition game against East Central (Okla.) on Sunday.

The Razorbacks and Tigers are scheduled to tip off at 3 p.m. at Bud Walton Arena. It is the first of two scheduled exhibition games for Arkansas, which will also play North Texas on Oct. 30 in Fayetteville.

Many of Arkansas’ video production staff will work the SEC Network-Plus broadcast of a home soccer game against Mississippi State on Sunday evening.

The Razorbacks’ 2019 exhibition against Arkansas-Little Rock was available via an online stream because the Walton Arena court was being named for former coach Nolan Richardson, Trainor said, but noted that was an exception. An exhibition against Southwestern Oklahoma State six days later did not have a video broadcast.

Arkansas did not play an exhibition game last season. The Razorbacks’ last two Red-White Games — including one last Sunday — were available on the streaming service SEC Network-Plus, but Trainor said regular-season broadcasts are prioritized over those in the preseason.

No single-game tickets are expected to be sold for the men’s exhibition games, which are included in season-ticket packages. On Monday, Arkansas announced it has sold all available tickets for the upcoming men’s season.