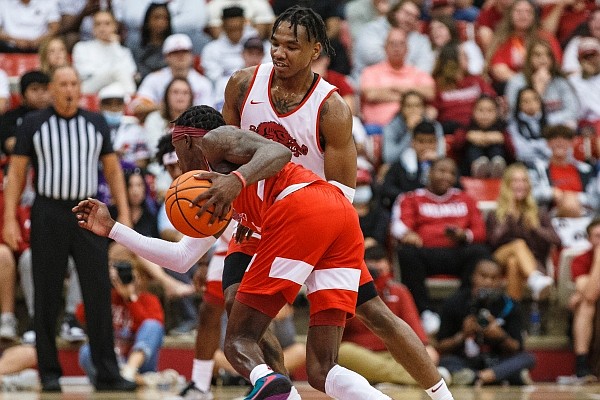 Arkansas senior JD Notae (1) defends Davonte Davis during Red-White game on Sunday, Oct. 17, 2021, during the second half of play at Barnhill Arena in Fayetteville.

The Razorbacks and their fans stood out to some of the 10 prospects, including 4 commitments, in attendance for the Red-White game last Sunday at Barnhill Arena.

“The energy of the Red vs. White game was amazing from the players and especially from the fans,” Nash said. “There is a lot of love shown to the players down there from fans and just from everyone in the community.”

Senior guard JD Notae finished with 22 points, 6 assists, 4 steals and 2 rebounds to lead the White team to a 74-63 victory.

“The players competed at a high level and did not treat the game as if it was just a scrimmage, and Coach (Eric Musselman's) energy as a coach is amazing, because he demands the best out of you – nothing else,” Nash said. “He was going from team to team during the scrimmage and letting them know what was going good or bad, and he wasn’t coaching like it was a scrimmage.

"He was coaching like they were playing for the national title, and that’s what I love about him.”

“I really love how the guys moved the ball and how they ran up and down the court, and I really loved the college campus. It made me feel like (I was) home,” Marshall said.

The Red-White game made Razorbacks guard commitment Derrian Ford, 6-4, 205, of Magnolia, like everything about the visit.