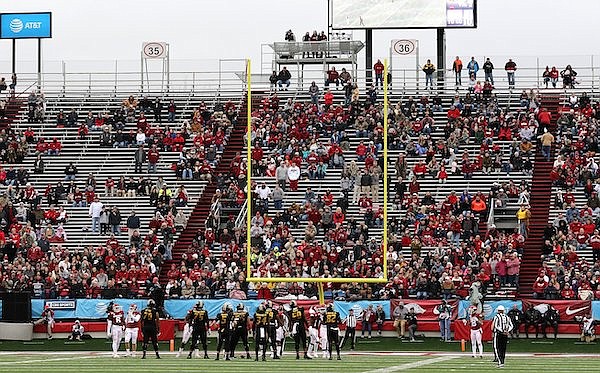 The bleachers are shown during a game between Arkansas and Missouri on Friday, Nov. 29, 2019, at War Memorial Stadium in Little Rock.

FAYETTEVILLE — Like reruns ranging from “Gunsmoke” to “Friends,” the same press conference questions persist before the University of Arkansas’ Razorbacks play a football game at War Memorial Stadium in Little Rock.

The Razorbacks today return to Little Rock and War Memorial Stadium for a nonconference game against the University of Arkansas at Pine Bluff Golden Lions.

Adding the instate factor, some questions were asked this week of second-year Razorbacks Coach Sam Pittman not asked his predecessors since the Great Stadium Debate commenced during the 1990s expansion of Razorback Stadium.

Some questions were asked about the nostalgia of playing at War Memorial.

Others, more frequently asked recently, compared the facilities’ capacities and amenities, asserted the Razorbacks’ inconvenience traveling for a “home game,” and the opportunity lost showing recruits the Fayetteville campus.

Though from Grove, Okla., Pittman because of a Razorbacks-adoring uncle, grew up a Razorbacks fan. He’s well versed noting the great times and support the Razorbacks enjoyed at War Memorial.

As the Razorbacks' 2013-15 offensive line coach for Bret Bielema, Pittman has seen the other side of the GSD.

From 2013-15, Bielema’s Hogs went 1-3 in Little Rock. They barely escaped lower division Samford in 2013 before losing a 2013 SEC game there to Mississippi State, followed by an SEC loss there to Georgia in 2014 and a stunning 2015 nonconference tumble to Toledo.

Adding defeats to inconvenience do not good memories make.

They keep a Little Rock game, albeit a nonconference one, including an already anticipated 2025 matchup with Arkansas State.

The Hogs have never belonged just to UA alums or just to Northwest Arkansas or just to the rich. If playing just one game in Little Rock somehow reinforces all that, it’s well worth the Razorbacks’ inconvenience.