No pressure on UAPB 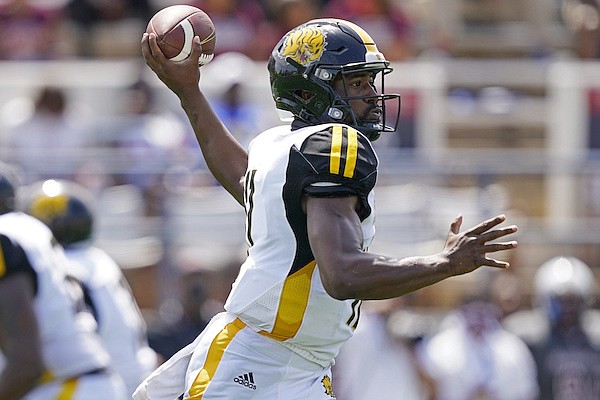 After losing their fifth game in a row last week, the last thing UAPB (1-5) wants is to stroll into today’s momentous clash with the state’s flagship program more worried about the magnitude of the game rather than taking advantage of it on the field.

“With the group of guys we have, they really don’t get too high, and they don’t get too low, UAPB Coach Doc Gamble said. “They’re an even-keeled, come-and-go-to-work group every single day, and that’s showed, even with us having struggled these past few weeks. I do know they’re looking forward to playing, though.

“This is one where I won’t have to worry about a pre-game speech in the locker room. But I think they understand and realize the opportunity they’ll have when the ball is kicked off. I don’t think the moment will be too big for them.”

Knocking off a Power 5 team would be a feather in the cap for a Golden Lions team that’s had a hard time generating any kind of steam for more than a month.

Mistakes have been the primary culprit for UAPB’s problems this season. The Golden Lions have turned the ball over 14 times and averaged 296 yards of offense during its five-game slide. Last week in a 34-7 loss to Southern, the Jaguars scored 17 points off five turnovers, all of which occurred in the middle of drives that were four plays or less. UAPB didn’t put together a sustained march longer than 46 yards until its final series of the game when it moved 70 yards in 10 plays to avoid being shut out.

That kind of offensive inconsistency has also put UAPB’s defense — one that’s dotted with freshmen and transfers – in binds at times. Gamble knows his team could be in for a long day inside Little Rock’s War Memorial Stadium if that trend continues.

But the second-year coach believes in his team and feels they’ve got a chance to open some eyes in what’s expected to be a huge crowd if they can avoid stubbing their own toes against an opponent much more polished than any other the Golden Lions have faced this year.

“[Arkansas] has size, definitely up front,” Gamble explained. “At the skill positions, I do think we can run with them, and that’s a little different from what you’d normally get from a Power 5 to an FCS school. But us being able to run with them will depend on our health, too, because we’re not really healthy right now, especially at wideout.

“But none of that will matter unless we do things the right way and play the way we feel we’re capable of playing. I tell the guys all the time that in games, there are no do-overs. You make a mistake in practice, you tell them to run it again. You can’t do that in a game.”

The Razorbacks (4-3) won’t be interested in giving free passes to the Golden Lions, particularly because they’re trying to right the things that have gone wrong for them during their own three-game losing skid in SEC play. Arkansas still has a tough road ahead after today and will close out the regular season with games against Mississippi State, Alabama, LSU and Missouri following next week’s open date, but Gamble doesn’t think the Razorbacks will be overlooking his team.

“I’ve been a part of these types of games at other schools,” he said. “Typically, what happens is that you go in and play well early, and then the size may wear you down late. But if you can find a way to keep the game close, you’ve got a chance.

“Really, there’s no pressure on us. Internally, it’s about trying to find a way to get off our skid. But [Arkansas] has hit a few bumps as well. So you’ve got two teams looking for another win any way they can get it. We’ll bout be trying to do the same thing.”