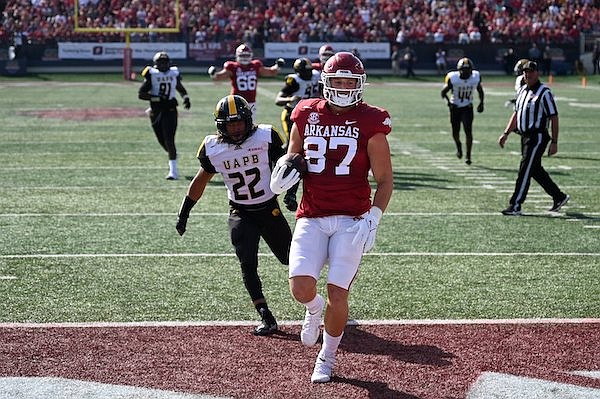 Arkansas tight end Blake Kern (87) scores a touchdown during a game against UAPB on Saturday, Oct. 23, 2021, in Little Rock.

LITTLE ROCK — A historic in-state matchup 77 years in the making hit its peak by halftime.

The University of Arkansas did all its scoring in the first half and Arkansas-Pine Bluff did all the scoring in the second half following an energetic combined performance by the schools’ bands.

The Razorbacks (5-3) lit up the scoreboard behind Treylon Burks and KJ Jefferson in the early going and cruised in the 24-minute second half of a 45-3 win on Saturday before a crowd of 42,575 at War Memorial Stadium in Little Rock.

Arkansas broke a three-game losing streak while notching its first win against an in-state opponent since downing Arkansas-Monticello 41-0 in 1944.

“Honestly we needed to feel good again,” Arkansas Coach Sam Pittman said. “We went through a rough stretch. Again, that’s not an excuse. … That’s the truth. Coming back here today, to be up 45-0 at half was a big, big deal for us.

“I’ll give Pine Bluff credit. Their team fought all the way through to the end.”

The Golden Lions (1-6) dropped their sixth in a row but more than held their own in the second half by out-gaining the Razorbacks 91-78 in the final two quarters and winning on the scoreboard, 3-0.

“We turned the ball over too much,” UAPB Coach Doc Gamble said. “We had some great chances, but we get another shot at these guys in a couple years, so we’ll learn from today’s loss and build from it.”

Arkansas used reserves on both sides throughout the second half and could find very little traction on offense.

Burks put his name higher in the Arkansas record books by surpassing the 2,000-yard mark with two receiving touchdowns and one rushing score.

“I really don’t even look at stuff like that,” Burks said. “I just go play for the team.”

Burks’ 49-yard jet sweep around right end was his first career college rushing touchdown, and it capped a one-play drive that put the Razorbacks ahead 14-0 less than three minutes into the game.

The Warren native also dove over the end line for an 18-yard touchdown on a slant midway through the second quarter and caught a 39-yard go route on a fourth-and-4 play with 1:00 left in the half to give the Hogs their 45-0 lead.

Pittman was asked about his star receiver, with the reporter mentioning that Burks looked like the best player on the field.

“Did you watch it?” Pittman said, drawing laughter. “He was the best guy out there.”

Arkansas scored on six of its eight offensive possessions in the first half, including five touchdowns, and Nathan Parodi returned a punt 80 yards for a touchdown during the high-scoring half.

“On the offensive side we wanted to start fast and get the young guys in,” Jefferson said. “Just show the crowd, the fans here, the future is bright for the Arkansas Razorbacks.”

Jefferson completed 10 of 17 passes for 194 yards and a career-high 4 touchdowns with a handful of family members coming over from Sardis, Miss., to watch.

Parodi had 114 punt return yards and notched the Razorbacks’ first punt return score since Joe Adams’ 51-yarder in a 29-16 win over Kansas State in the 2012 Cotton Bowl.

“We did a nice job blocking,” Pittman said of the punt return, on which Parodi had plenty of room to operate after Josh Sanchez’s 47-yard punt outkicked his coverage. “The guys turned around and got out in front of him and Parodi, I believe he made a guy miss and got down the sideline and outran everybody.”

Burks, a former Arkansas punt returner, said, “I’m not going to lie, I was really pumped and kind of jealous at the same time.”

The Razorbacks had their first two-takeaway game — on interceptions by Myles Slusher and Malik Chavis — since notching three in the season opener against Rice, but they also lost two fumbles for a break-even turnover margin.

Arkansas had three sacks, by Zach Williams, Andrew Parker and a combo sack by Slusher and safety Joe Foucha, and limited the Golden Lions to 132 yards in the first half and 223 for the game.

“It did feel good that I got my sack for my hometown because it means a lot,” said the Little Rock native Williams.

“It doesn’t really mean a lot to everybody else outside of Arkansas, but it means a lot to people inside Arkansas. It was a historic moment, 70-something years since we played an in-state team. I’m grateful enough that I got a sack, so I was really happy about that moment. I’m going to remember it forever.”

Arkansas linebacker Bumper Pool had a team-high eight tackles and surpassed the 300-tackle mark for his career by reaching 301.

“Obviously it’s a team game, so those accolades are nice, but we got a big win today,” Pool said. “For that to happen was awesome. I’ve put a lot of work into this university and for it to happen here … I think two years ago I was talking to y’all after the Missouri game. Just how far we’ve come as a team means the most to me.”

UAPB had a couple of golden chances to score in the first half but couldn’t break through.

The first came after Dae’eion Dawkins hauled in a 42-yard pass from Skyler Perry to the Arkansas 33 to open UAPB’s second possession. The Golden Lions reached the 16 before going backward and stalling at the 20. Zack Piwniczka’s 37-yard field goal went wide right.

Early in the second quarter defensive lineman Zion Farmer forced a fumble on a Jefferson scramble and defensive lineman DeCarlo Hamilton recovered at the Arkansas 33. A 13-yard catch by Josh Wilkes, with a roughing-the-passer penalty against John Ridgeway tacked on, put the Golden Lions on the 9. The drive reached third and goal from the 3 before Perry’s pass in the end zone was picked off by Slusher for his first career interception.

The Golden Lions put together their best drive of the day, a nine-play, 61-yard sequence, midway through the 12-minute final quarter with Perry at the controls. Dalyn Hill accounted for 52 yards on the march, with his 32-yard catch to the Arkansas 35 triggering the series.

UAPB bogged down on the Arkansas 15 and Piwniczka came on to boot a 32-yard field goal and break the shutout.

“The younger guys that got in during the second half … nobody got in the end zone,” Williams said. “I’m really happy and proud about how the defense handled it in the second half. The older people, we just coached them up and they really loved the stuff we had to say. We just felt good about that.”

The Razorbacks rushed for 291 yards, which included several lost-yardage runs in the second half.

Dominique Johnson led the way with 91 yards on 6 carries, while Burks added 56 yards, Raheim Sanders had 46 and AJ Green 36.

The Razorbacks have an open date next week before resuming the final four-game regular-season run with a home date against Mississippi State. The Golden Lions return to SWAC action Saturday at Texas Southern.