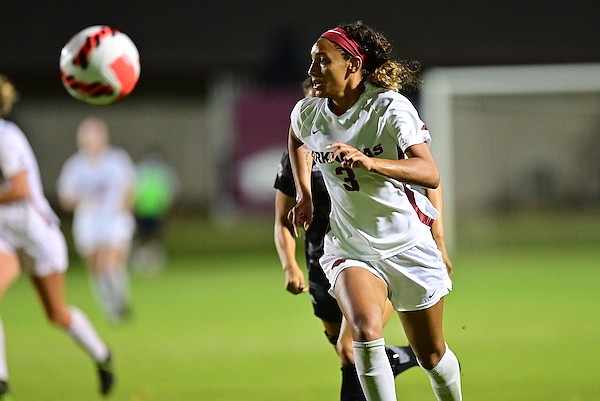 Arkansas forward Kiley Dulaney chases a ball during a game against Mississippi State on Sunday, Oct. 24, 2021, in Fayetteville.

FAYETTEVILLE — The University of Arkansas shook off about an hour lightning delay to wrap up the outright Southeastern Conference regular-season title on Sunday night at Razorback Field.

The No. 4 Razorbacks notched their school-record 14th consecutive victory, scoring a pair of second-half goals to blank Mississippi State 2-0.

Arkansas (14-2, 9-0 SEC) will look to finish out a perfect run through the SEC on Thursday when it takes on LSU in Baton Rouge, La. Kickoff for the regular-season finale is slated for 7 p.m.

The Razorbacks snapped a scoreless tie less than two minutes into the second half as Kiley Dulaney scored from right in front of the goal. Razorbacks keeper Hannah Warner turned away a possible equalizer a little more than four minutes later. Freshman Avery Brandt fired a bullet from the right side, but Warner deflected it.

Arkansas, which has now won or shared three straight SEC titles, had several chances to increase the lead, but finally found the back of the net with a little more than 20 minutes left in the second half. Reagan Swindall’s shot was deflected by the Mississippi State goalkeeper. However, Bryana Hunter was right there to put it in.

Less than one minute later action was halted because of lightning in the area and there was a delay of around an hour.

Senior Haley VanFossen said there wasn’t any discussion about any possible delay earlier despite weather reports calling for possible storms in the evening. But she admitted getting the second goal was important.

“Getting that second goal took a little bit of a weight off our shoulders, but we knew they were gonna come out hard after the delay so we had to dig in,” VanFossen said.

Hunter said the team used the delay a little rest period, but knowing they had work left to do.

“I think we listened to music in the locker room, dancing, trying to keep loose for the most part,” Hunter said. “Rest a little bit, but not too much.”

The Razorbacks misfired on a couple scoring chances, but also turned away the Bulldogs at every turn when play resumed to notch the shutout.

“It’s really big,” Hunter said. “It’s never happened before in our program and it’s good to do it again.”

The Razorbacks out-shot Mississippi State 7-4 in the opening half and 17-8 for the match. They also enjoyed a 12-3 advantage on goal.

“Their keeper made a couple really nice saves on chances that could have put the game out of hand,” Hale said. “We just kept grinding. Other than the corner kick that hit the post, I didn’t think they created much. But we knew we were going to get a great effort from them, like we have everyone.”

Hale reminded his team to enjoy the moment even though it has other goals in front of them.

“We’ll celebrate a lot of this at the end of the season , but we want to smell the roses a little bit and enjoy tonight,” Hale said. “Winning’s hard. Sometimes when you go on long winning streaks you forget how hard it is to win. So we just keep talking about it.

“We have to out-work the other team because we’re going to get tremendous efforts from everybody. I thought we played hard. We created chances. We limited their chances.”