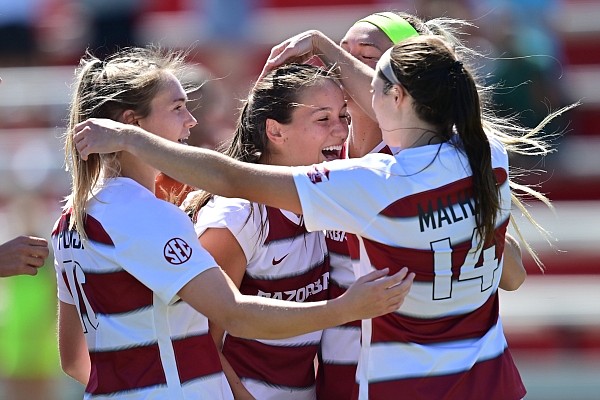 Taylor Malham celebrates with Arkansas teammates during a game against Ole Miss on Sept. 26, 2021 at Razorback Field in Fayetteville.

“I think we just got really lucky that we were being recruited by the same school,” said Goins, a three-time All SEC forward and third-team United Soccer Coaches All American last season.

But five years later, it’s turned out well for the trio from Broken Arrow, Okla., and for the University of Arkansas.

Goins became the school’s all-time points leader nine days ago on senior day. The three are among a group of seniors, who will play their final regular-season home match this evening at Razorback Field.

The No. 4 Razorbacks (13-2, 8-0 SEC) will look to wrap up their third consecutive SEC regular-season title with a win when they host Mississippi State. Kickoff is slated for 6 p.m.

Arkansas clinched at least a share of the title on Thursday thanks to a 2-0 win at No. 19 Auburn coupled with losses by Tennessee and Ole Miss. Mississippi State (4-7-3, 2-5-1) snapped a three-match skid with a 2-1 win over Texas A&M in Starkville on Thursday.

Arkansas Coach Colby Hale said the group will leave a lasting mark on the program.

“They’ve been huge,” said Hale, who is in his 10th season at Arkansas. “They’re wonderful people. They set the culture. They’re fantastic players. You could talk for two hours and not say enough.

“When you have a class that’s been here this long, been this productive and this high character, this is how we’ll do things forever. So now the younger players are learning how to do things from them and they will pass it on.”

Goins, who was the last of three to commit, acknowledged the program’s growth in five years has been exceptional.

“Our time here, it’s crazy to think when we committed this was a good program, but when we’re leaving, we’re gonna be a top five program,” Goins said. “I think it’s just really special to have been a part of it.”

But it’s even more than that for VanFossen, who got to experience it with some of her best friends.

“I don’t think many people can say they have gotten to play with three of their best friends for as long as we have,” said VanFossen, a three-time All-SEC selection and United Soccer Coaches third-team All American as a junior. “I’m just blessed for the opportunity to have played with them, two of the best players

Cora Duininck, a Tulsa native who also played club soccer with the trio, joined the team this year as a graduate transfer from Liberty.

Hale pointed out what the group has helped do on the field, likely headed to their fifth consecutive NCAA Tournament appearances to go with the three straight SEC titles. The Razorbacks have been dominant in the league, going 23-2-1 over three seasons during the regular season. They’ve also reached five consecutive SEC Tournament finals, but have yet to win a tournament title.

That’s one of a few things the group is hoping to add to their final chapter as Razorbacks, VanFossen said. Getting an additional year because of the pandemic gives them that chance and they are grateful.

“I’d say that fifth year is a blessing in disguise because there’s so much we want to accomplish because our true senior year was affected by covid,” VanFossen said. “We just wanted another shot at making it further, reaching a Final Four, winning an SEC Tournament and being conference champs again.”

Hale said the success this group has helped carve out will hopefully help the Razorbacks continue down the same path.

“We’re gonna lose them and they’ll be incredibly difficult to replace, but now because of the success they’ve had we’re also able to recruit other good players,” Hale said. “The hope is that this is lasting. They wanna come back in 10 years and see the program still thriving and growing on what they built.

“But they were invaluable to this program. We wouldn’t have done any of this without them for sure.”