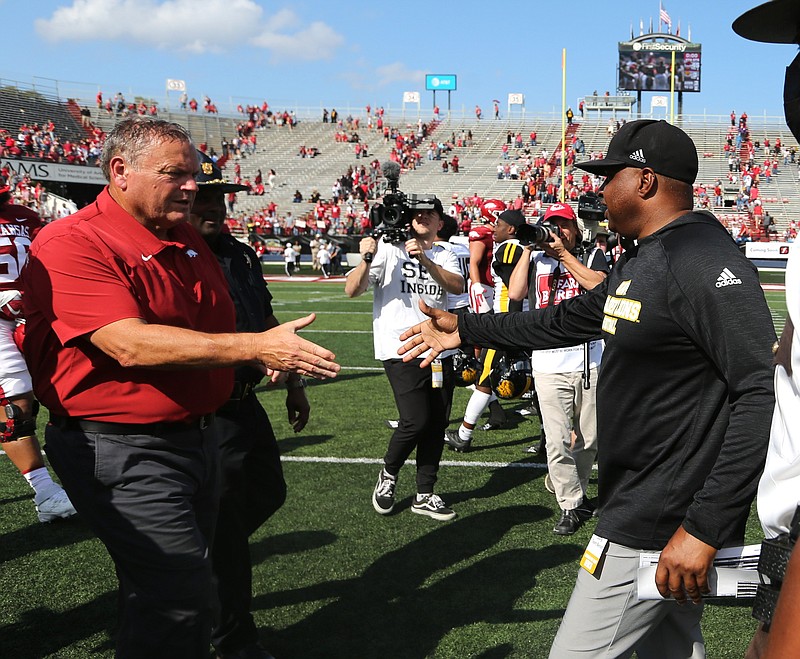 FAYETTEVILLE — If his Arkansas Razorbacks fulfilled the Oct. 23 Little Rock portion of their prescription, Sam Pittman knew after a prescribed week off they’d all feel better come Halloween.

The Hogs hardly could have felt worse seeing their 4-0 start blotted by three consecutive SEC losses. The last one, 38-23 vs. Auburn on Oct. 16 in Fayetteville, hit them hard, especially following a 37-0 blowout at No. 1 Georgia and a 52-51 heartbreaker at Ole Miss.

“I think we all feel like crap,” Pittman said during the Oct. 16 postgame at Reynolds Razorback Stadium. “I think we’ve got a beat-up team, to be honest with you. This bye week can’t get here fast enough.”

However before this bye week — which for the Razorbacks began Sunday and end next Sunday launching game-week practices for their Nov. 6 clash with Mississippi State at Reynolds Razorback Stadium — Arkansas had a nonconference game. At War Memorial Stadium in Little Rock they opposed Arkansas-Pine Bluff.

But what manner would the Hogs prevail against Coach Doc Gamble’s Golden Lions expected, and doing so, to arrive inspired playing for the first time against the University of Arkansas’ system flagship?

Would the Hogs wallow early like they did in their season-opener trailing underdog Rice, 17-7 into the third quarter before prevailing, 38-17? Would they risk first-team injuries having to play starters deep into the second half to clinch victory in Little Rock?

They would not. Efficiently and enthusiastically in all phases Arkansas tamed the Golden Lions in a 45-0 first half of its 45-3 victory.

“Coming back here today, to be up 45-0 at half was a big, big deal for us,” Pittman said in Little Rock. “It really was. We needed to feel good again.”

Playing reserves all the time, the Hogs defensively remained proficient through their second half against UAPB.

Arkansas’ offensive reserves did not. Give Gamble’s Golden Lions defense credit for some of that.

Also know that while the regulars and the mending will mainly mentally refresh during this week’s practices, Pittman will scrimmage those lesser-used reserves especially gauging them offensively.

“As you saw we need more reps with those guys,” Pittman said.

Meanwhile he got the most out of less playing his starters for a half, injury unscathed and confidence renewed for a November final four SEC stretch vs. Mississippi State, at LSU, at Alabama and Missouri in Fayetteville.

“We’re excited about trying to make another run," Pittman said. “Our kids believe we can do that. This game helped us toward that.”