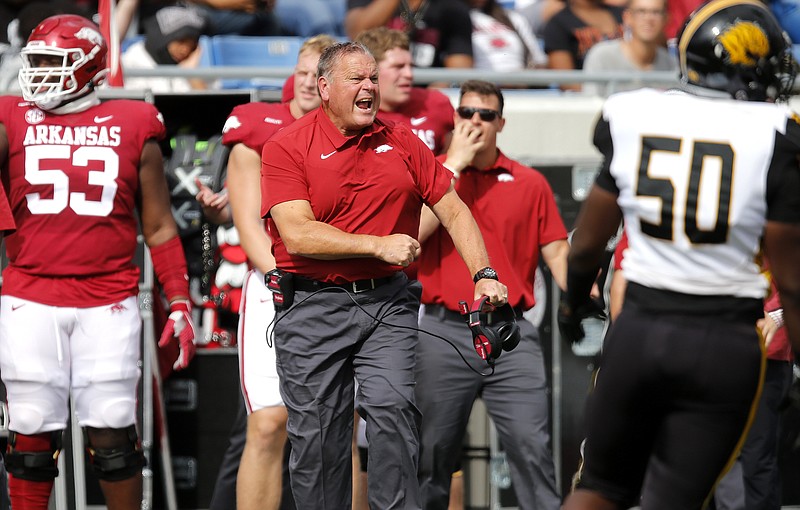 Arkansas coach Sam Pittman is shown during a game against UAPB on Saturday, Oct. 23, 2021, in Little Rock.

FAYETTEVILLE — After playing eight consecutive weeks, the University of Arkansas football team is getting a break.

The Razorbacks (5-3, 1-3 SEC) have an open date on Saturday before resuming conference play against Mississippi State at home on Nov. 6.

Beating the University of Arkansas-Pine Bluff 45-3 on Saturday in Little Rock got the Razorbacks within one victory of being bowl eligible.

Arkansas hasn’t played in a bowl game since 2016. The Razorbacks were scheduled to play TCU in the Texas Bowl last season, but the game was canceled when the Horned Frogs didn’t have enough available players after a covid-19 outbreak on the team.

“It would be a big deal for the University of Arkansas and our fans, I believe, for us to get another win or two or three or four or whatever that is and go to a bowl game,” Razorbacks Coach Sam Pittman said. “This got us one away from it.

“Our team, we want to go to postseason play and we want to earn it. So we’re one away, and I think we’ll be ready to play.”

After playing Mississippi State, the Razorbacks close the regular season with road games at No. 3 Alabama and LSU and finish against Missouri at home.

“I feel like that was a major jump-start to our program and what we wanted to do,” junior defensive end Zach Williams said of beating UAPB convincingly. “Coach Pittman said it was No. 1 of our streak and we want to keep that going.”

After a 4-0 start, Arkansas lost three consecutive games at current No. 1 Georgia, at No. 10 Ole Miss and to No. 18 Auburn at home.

“To me, it was important to get our confidence back,” Pittman said in a postgame SEC Network interview. “And not just winning the football game, but doing it the way we wanted to do it.”

Arkansas led 45-0 at halftime and played its second- and third-teamers in the second half.

“It feels good just to know that we got the win and just go into the bye week 5-3,” said junior wide receiver Treylon Burks, who scored three touchdowns. “But it really came from this week that we prepared for.

“We went out every day and prepared like we were playing Alabama.”

Burks planned to go home to Warren after the game.

“Just to get some time off to see family and rest our bodies is going to feel good,” he said. “We need it.”

Including a 20-10 victory over current No. 14 Texas A&M on Sept. 25, the Razorbacks played four consecutive weeks against teams that are currently ranked in the national polls.

“We’ve been grinding from fall camp, straight into the season, playing SEC games week in and week out,” quarterback KJ Jefferson said. “So this bye week is going to get us right mentally and physically, just giving our bodies a rest and time to get back ready to work after the bye week.”

Pittman said the starters won’t have any contact work this week in practice.

“We have to get healthy, and we have to have a great game plan for Mississippi State,” Pittman said. “But we’re excited about trying to make another run. Our kids believe we can do that.”