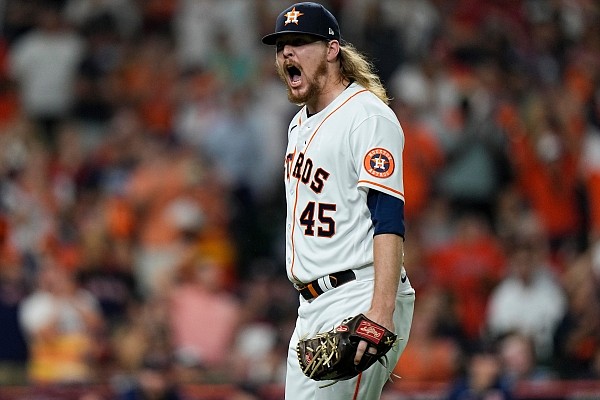 FAYETTEVILLE — University of Arkansas Coach Dave Van Horn won’t be rooting for the Atlanta Braves or Houston Astros in the World Series that opens tonight.

“Both of those guys were Friday night starters their last year here for us,” said Van Horn, who this spring will go into his 20th season as Arkansas’ coach. “They were outstanding Razorbacks and really big parts of our teams.

“I hate it that one of them isn’t going to win a world championship, but I’m just really proud of them and how far they’ve come to be in the positions they are now.

“They’re both tough and have good stuff. They worked hard, and they’ve earned everything they’ve gotten so far. I’m just really proud of them.”

Pitching for the first time in 18 days against the Los Angeles Dodgers in Game 4 of the National League Championship Series, Smyly went 3 1/3 innings in relief and allowed 2 runs and 2 hits with 2 strikeouts. He was credited with the victory when the Braves won 9-2.

In the American League playoffs, Stanek was credited with victories against the Chicago White Sox and Boston Red Sox. This season in five postgame games he’s pitched 6 2/3 innings and allowed 3 hits and 1 run with 6 strikeouts and 1 walk.

“So they’ve earned their way to the big leagues and they’ve both been heavy contributors for their teams’ success this year.”

Smyly, who signed a one-year, $11 million contract with the Braves, is with his eighth different organization.

A second-round draft pick by Detroit in 2010, Smyly pitched for the Tigers and Tampa Bay Rays from 2012-16.

Smyly was traded to the Seattle Mariners and then signed with the Chicago Cubs, but he missed the 2017 and 2018 seasons because of an elbow injury.

Next Smyly pitched for the Texas Rangers and Philadelphia Phillies in 2019, then for the San Francisco Giants last season.

Smyly pitched in just seven games with 26 1/3 innings in the 2020 season shortened by covid-19, but the Braves were confident he could help them.

“Obviously, we’ll find out eight months from now, 10 months from now how it worked out,” Atlanta General Manger Alex Anthopoulos said when the team signed Smyly. “But we think Drew has tremendous upside. He’s only scratched the surface.

“We feel like he’s about to really emerge to have the best years of his career. Once we made that determination, we signed him to a healthy, strong deal. Hopefully all sides will win and he’ll have a great year.”

“Drew’s been a survivor,” Van Horn said. “A of pitchers, when they get hurt a couple times, that second time they don’t find their way back to the big leagues.

“Drew did it last year by pitching really well for the Giants. Then he had the opportunity to go to the Braves.

“He’s done a little bit of everything this season, and I’m just real happy for him.”

Smyly and Stanek were both selected in the 2010 draft.

At the time, Smyly was draft eligible as a redshirt sophomore and Stanek was a senior at Blue Valley High School in Stilwell, Kan.

Stanek, a third-round draft pick by Seattle at 99th overall, turned down an $850,000 signing bonus to play for the Razorbacks.

“Ryne turned down a lot of money to come to school here,” Van Horn said. “Then he made a lot more money three years later.

“Coming here helped him develop and mature and get stronger. I think it’s helped lead to a long career for him.”

Stanek has pitched five seasons in the major leagues for the Rays, Miami Marlins and Astros with a 5-12 record, 3.84 ERA and three saves.

During the 2018 and 2019 seasons, the Rays made Stanek an “opener” in 56 games when the bullpen pitched rather than going with a traditional starter.

Stanek never went more than two innings in any of his starts.

“Ryne was one of those pioneers so to speak,” Van Horn said of popularizing the “opener” role.

Van Horn said it made sense for Tampa Bay to convert Stanek to a reliever.

“When Ryne was here, he was our No. 1 guy his junior year as far as being our Friday starter, but he really was a two-pitch guy with a fastball and slider,” Van Horn said. “His slider was his go-to pitch. If he had a full count and needed a strike, he was throwing his slider, because he could really command it and it was just a tough pitch to hit and square up.

“A lot of times if you don’t have a third or fourth pitch, at [the major league] level, they’re going to put you in the bullpen and say, ‘OK go out and get us some outs with those two good pitches.’ That’s what it looks like he’s done.”

Stanek signed a one-year, $1.1 million deal with Astros after a 2020 season in which he battled covid-19 and pitched just 10 innings and allowed 8 runs.

“Last year, I feel like I can almost write it off as an anomaly,” Stanek said when he signed with Houston. “It was crazy from start to finish.

“I felt pretty good with how I finished the season. I was throwing the ball really well. I didn’t really have a big sample size, so I think just coming in with a full season and getting back to some normalcy will definitely be a plus.”

Smyly and Stanek are the second pair of Razorbacks to square off with different teams in the World Series since 2017 when pitcher Dallas Keuchel’s Astros beat infielder Logan Forsythe’s Dodgers.

“This is the time of year that I get to watch more baseball than I do in the summer,” Van Horn said. “I don’t watch a whole lot of major league baseball in the summer. There’s just not enough time with everything else that’s going on.

“But during the playoffs, I’m tuning in pretty good. When our guys are involved, it makes it special.”