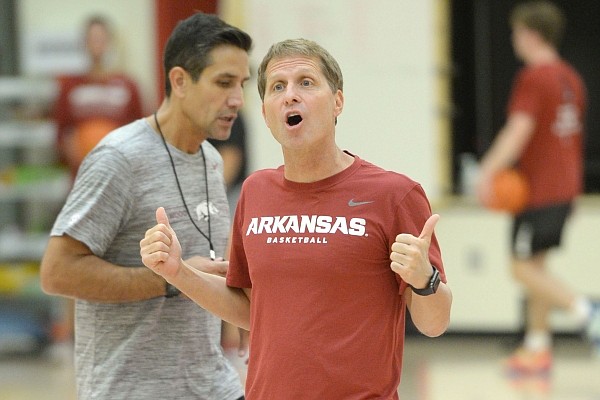 Arkansas coach Eric Musselman speaks to his team Tuesday, Sept. 28, 2021, during practice in the university practice facility in Fayetteville.

FAYETTEVILLE — University of Arkansas Coach Eric Musselman is borrowing a phrase from Chauncey Billups — the former NBA All-Star guard and new coach of the Portland Trail Blazers — to make a point with the Razorbacks.

The phrase is, “Put an address on it,” Musselman told the Hawgs Illustrated Sports Club on Wednesday.

Musselman, a former NBA coach, said he heard Billups use the phrase on a podcast he listened to recently.

The phrase, Musselman said, is about personal accountability among the players.

“To me, accountability is when something is out of place and something isn’t going right, we have to identify what it is and then, as I would call it, ‘Put an address on it,’ ” Billups said in a Sept. 27 news conference with Portland media. “And here’s what I mean by that. I’ve played for a lot of coaches that, in team meetings or at halftime, after the game, whatever, would say, ‘You know what, we’ve got to do a better job of stopping the basketball, we’ve got to guard better.’

“And I think it does two things. One, it lets that guy understand and know that he has to be better. And two, it puts everybody else on notice. Nobody wants that, nobody wants to be the star of the tape the next day because you’ve blown five coverages.

“But it’s a respectful way to do everything and at the end of the day, it’s just coaching. And the best coaches that I’ve ever played for coached that way, from little league on to pros.”

After Arkansas, ranked No. 16 in The Associated Press preseason poll, had to rally from a 14-point deficit to beat NCAA Division II East Central (Okla.) University 77-74 in an exhibition game last Sunday in Walton Arena, Musselman was critical of his team’s conditioning.

Musselman said Wednesday he wasn’t specific in his statement about the team’s conditioning.

Musselman said the Razorbacks have some players in “phenomenal shape,” and he singled out senior guard JD Notae and sophomore guard Davonte Davis specifically,

“Those two guys in particular are in insane, positive shape,” Musselman said. “Then we have a few guys that are gasping for air.”

Musselman didn’t name the players who need to get in better condition, but he drew applause from the crowd Wednesday when he said the Razorbacks practiced twice Tuesday wearing weighted vests and holding bricks when they did defensive drills.

“When we play against each other behind closed doors in our scrimmages, we’re playing our defense against our offense,” Musselman said. “We learned a lot about our team Sunday playing against a Division II team that, quite frankly, we should have beaten by a lot more than what we won by. But it was really good for us.”

Musselman said big men Jaylin Williams and Connor Vanover didn’t defend on pick-and-rolls the way he wants. Rather than playing tight defense and blowing up screens, he said, they didn’t move their feet,

“Connor and Jaylin stood 12 feet off their guy with their hands up,” Musselman said. ”Just standing there, didn’t move.

“That had a lot to do with why we played really poorly on pick-and-roll coverages.”

Musselman said the Razorbacks will try to play better in all phases — including pick-and-roll defense — when they face North Texas in another exhibition game at 4 p.m. Saturday in Walton Arena.

The Razorbacks no doubt will look forward to the game after enduring tough practices this week.

“The team would love me to stay here as long as possible,” Musselman, who spoke Wednesday for about 40 minutes, told the crowd. “I promise you that.”

Despite Arkansas being ranked in the AP preseason poll for the first time since 2007-08 and coming off a 25-7 season and the program’s first NCAA Tournament Elite appearance since 1995, Musselman isn’t feeling overly confident.

“I love to read articles and watch press conferences,” he said. “Almost all the college coaches right now think their teams are great and they’re all going to the Final Four.

“I’m kind of the opposite. I see a million holes we have and I probably won’t sleep much between now and our Mercer game just worrying about everything.”

The Razorbacks open the regular season against Mercer on Nov. 9.

“I do like to have fun,” Musselman said. “But I also have this paranoia internally about how are we going to win the next game?”

The Razorbacks had a 23-4 run to move ahead and then hung on to win when the Tigers missed a three-point attempt at the buzzer.

“I know it was a Division II team, but still, we hadn’t done that all game,” Musselman said of putting together a big run. “We kind of figured out a way.”