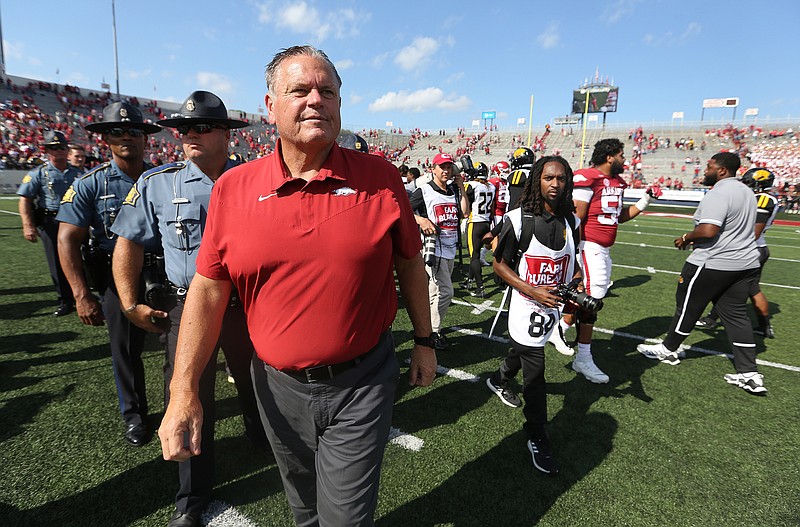 FAYETTEVILLE — The Arkansas Razorbacks are fixated on what they’re calling “making a run” in their final four games and that plan started during their open date this week.

The University of Arkansas (5-3, 1-3 SEC) will start its final month-long run against Mississippi State next week, followed by road dates at LSU and Alabama, then the home finale against Missouri.

The top units on offense and defense had situational walk-throughs in practices on Tuesday and Wednesday, while younger players went through limited scrimmages to give them more live work and see if anybody is in position to earn more game-day reps, Coach Sam Pittman said on Wednesday.

“We’ve got good team chemistry,” he said. “We’re trying to talk about making this run and see if we can do it.”

Pittman said the Hogs’ open date was critical after a tough grind that included consecutive games against Texas A&M, Georgia Ole Miss and Auburn, all of which are currently ranked in the top 18 of The Associated Press Top 25 poll.

“I think it’s just really big, and I think the kids … let’s say this, it’s the walk-throughs and we’re doing extra film work, so it’s not like it’s a shortened down day,” Pittman said. “We’re spending more time in the film [on] Mississippi State, trying to get that in their brain mentally.”

Pittman said he liked how hard the Razorbacks played and their effort through the first eight weeks and that there are clear areas of focus for the final third of the regular season.

“We certainly need concentrating on tackling better and more consistently on defense,” he said. “On offense, the penalties of jumping offsides has been a big emphasis, and playing consistent. We continue talking about winning first down.”

Pittman noted that none of the younger players were injured during 29 plays of scrimmaging on Tuesday.

The same kind of practice was slated for Wednesday, with situational work like third downs, short yardage, goal-line and special teams for the veterans at walk-through speed, and 30 more plays of live scrimmaging for the reserves.

Pittman said offensive linemen Ty’Kieast Crawford and Luke Jones and defensive linemen Cam Ball and Marcus Miller looked good in some of the work they got in the second half against UAPB.

“I thought our defensive guys flew around to the ball and did a good job in the second half,” he said. “Certainly, we’ve got to get better at a lot of positions on offense, catching the ball, throwing the football, with the twos. It wasn’t very good, and we’ve got to continue to work that.

The coaching staff is also looking to see who will be the top backup at slot receiver behind De’Vion Warren and whether any of the younger wideouts merited promotion from the scout team to the travel roster.

Additionally, the offense will make a renewed emphasis on getting more carries for Dominique Johnson, who rushed six times for 91 yards in last week’s 45-3 win over Arkansas-Pine Bluff in Little Rock.

“Obviously, I’ve said it before and we didn’t get it, but Dominique Johnson needs to carry the ball more,” Pittman said. “Those first four runs averaged 20 yards a carry. So we’ve certainly addressed that better than we did last time.”

The Razorbacks will enter the final stretch as one of the nation’s best and most diverse rushing teams, with five players at 200-plus rushing yards. Arkansas is sixth in the country with 249 rushing yards per game.

“I feel like we’ve got some competition back there, certainly between [Simeon] Blair, [Greg] Brooks, Jayden Johnson and Slusher,” he said. “I think that’s an ongoing competition, as well as at corner. I think those are two competitions going on.

“We certainly have a running back competition, wide receiver competition. We’ve got to figure who we want to play at slot, as far as our No. 2 slot. Those things are going on now. It’s a good week to find out about some of the younger guys and see if they can do something well enough and are ready enough mentally to go play in an SEC game.”

As for players slowed recently by injuries, offensive tackle Dalton Wagner and defensive linemen Markell Utsey and John Ridgeway should be on target to return to practice and be ready for action against Mississippi State.

“I think all of them will be game ready and … to be honest with you, I don’t think it’s a question,” Pittman said. “I think everybody will be ready to play.”

The Razorbacks have an interesting schedule in the days leading up to the Mississippi State game.

Arkansas will conduct a Monday-like practice on Thursday in spider pads instead of the normal shells before having a couple of days off while most of the coaches hit the road for recruiting. The team will resume practice on Sunday in shells with another Monday-style practice.

The entire team has the day off on Tuesday as mandated by the NCAA because it’s a voting day. After that, the Razorbacks will resume their schedule as normal on Wednesday.