Razorbacks have no bye week in recruiting 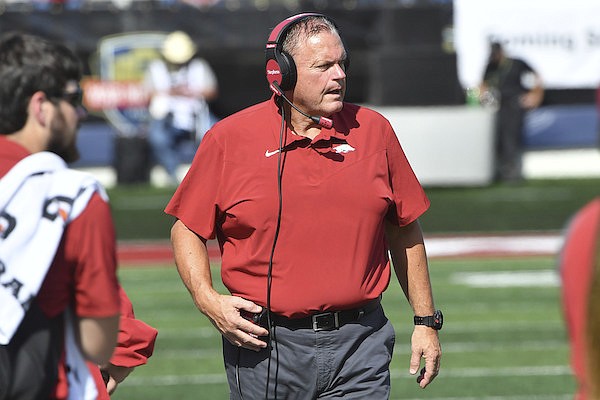 FAYETTEVILLE — Just because the Arkansas football team doesn’t have an opponent on Saturday, it doesn’t mean Razorback head coach Sam Pittman and his assistants have an off weekend.

Or even an idle Tuesday, when the Razorbacks and other college programs can’t work out or even meet because of NCAA rules regarding Election Day.

Pittman and his staff will see recruits in the 2022, 2023 and 2024 classes on Thursday night, all day Friday and Tuesday.

Watching prospects on film is important, but nothing beats seeing them in live action, Pittman said.

“Nowadays it is hard — not impossible, but hard — to get kids to work out at (summer) camps,” Pittman said. “It is a lot easier to get the younger ones than the multi-offer guy, who sometimes it is hard to get to work out.

“Obviously we have tape, and I watch all of our prospects on Sunday, Monday and Tuesday nights from their game, but seeing them live is just so much more important.”

Pittman stresses that you can tell more than just about talent when you see a prospect in a game setting.

“Seeing how they perform when they are not playing well — do they continue to give effort when their team gets behind?” Pittman said. “I think you can tell a lot about character from what you get there. I think it is very important.”

Pittman has been out recruiting locally lately with documented stops at Fayetteville and Shiloh Christian, where 2022 linebacker pledges Mani Powell and Kaden Henley play, respectively.

Arkansas has picked up its activity on the recruiting trail in the last month.

“We’ve been sending out some coaches in areas on Fridays for probably the last four or five weeks,” Pittman said before his team’s 45-3 win over Arkansas-Pine Bluff. “Didn’t do it early just to make sure the team was ready to roll, but I think we’re pretty used to it right now.”

Pittman made clear his recruiting philosophy on Barstool Sports’ "Pardon My Take" podcast in late September.

“We’re honest as the day is long,” Pittman said. “What we say is what we’re gonna do, I think that’s the biggest thing. I didn’t come in here with a lot of cliches and promises or anything.

“I wanted to reflect the state of Arkansas, which is a blue-collar, hard-working state, you know a lunch pail-type state.”

He also talked about his love for handwritten note to recruits and their families.

“At 9 o’clock every single night our recruiting staff comes in and they do a great job,” Pittman said on the podcast. “It’s always notes and then it’s either texts, calls or film reviews from 9 to 10 every night.

“It always has something to do with handwritten notes because it’s something of the past a little bit, you know. I think there’s power in it, and it doesn’t take long to write them, so that’s what we do.”

The addition of Australian punter Max Fletcher to the Arkansas commit list earlier this week gives the Razorbacks 19 pledges in the 2022 class.

That class is ranked 20th nationally by 247Sports' composite rankings and seventh in the 14-team SEC.

Arkansas also has three commits in its 2023 recruiting class, an early haul ranked eighth nationally and fourth among SEC programs.

Pittman noted at one of his recent radio shows that he only knows one way to recruit.

“The only way you can get recruits is if you out-work people,” Pittman said. “You can have personality and all this, but if somebody out works you on this young man, they’re going to get him.

“Our goal is to make it where we’re so tight to him, his mother, his father, his grandmother, his dog — whatever’s important to them — they can’t tell us no.”