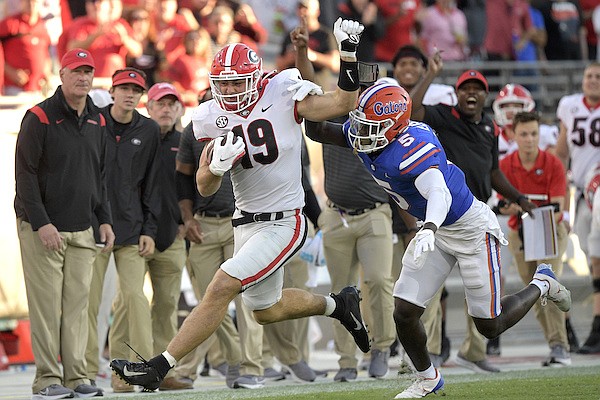 Georgia tight end Brock Bowers (19) is pushed out of bounds by Florida cornerback Kaiir Elam (5) after catching a pass during the second half of an NCAA college football game, Saturday, Oct. 30, 2021, in Jacksonville, Fla. (AP Photo/Phelan M. Ebenhack)

The top-ranked Bulldogs and the nation's No. 1 defense dominated Florida, scoring three touchdowns off miscues in a 12-play sequence that carried them to a 34-7 victory Saturday, their fourth in five years in the neutral-site game.

Georgia (8-0, 6-0 Southeastern Conference) won its 12th straight since getting steamrolled in Jacksonville a year ago. The Bulldogs’ injury-riddled defense allowed 571 yards in that one, the most in coach Kirby Smart’s six seasons.

Florida (4-4, 2-4) managed no points, 11 first downs and 214 yards through three quarters and looked like its decades-old, NCAA-record scoring streak might be in jeopardy down the stretch. But the Gators finally got on the scoreboard with 2:49 remaining, extending the streak to 418 games. They have scored in every outing since getting shut out by Auburn in 1988.

Emory Jones' late touchdown run, though, did little to negate Georgia’s mastery for three-plus hours on a cool, sundrenched afternoon. All the empty seats on Florida’s side of TIAA Bank Field told the real story.

This one was over by halftime.

Smith started the onslaught by ripping the ball out of Anthony Richardson’s arms at the end of an 8-yard run. James Cook sliced his way through Florida’s defense for a 10-yard touchdown run on the ensuing play.

Richardson was making his first career start, getting the nod over turnover-prone Jones.

Two plays later, Travon Walker tipped Richardson’s pass over the middle and Smith intercepted it. Stetson Bennett, who started his fourth consecutive game in place of JT Daniels, found Kearis Jackson for a 36-yard score on first down.

Trailing 17-0, Richardson had Florida on the move before throwing a pass that Nakobe Dean picked off and returned 50 yards for a touchdown.

The Bulldogs scored three times in 2:09. The last team to score three TDs in that little time at the end of a half was Utah State, which did it in a 52-26 win over Boise State in 2015.

Florida never recovered, losing for the seventh time in its last nine games against Power 5 opponents.

STARKVILLE, Miss. — Dillon Johnson ran for two touchdowns and Mississippi State scored 14 points off of four Kentucky turnovers to beat the No. 12 Wildcats 31-17 on Saturday night.

The Bulldogs (5-3, 3-2 SEC) came up big with three interceptions of Will Levis and a fumble recovery. They turned a third-quarter fumble and pickoff into consecutive touchdowns to put the game out of reach.

Will Rogers set an SEC record by completing 92% of his passes — 36 of 39 — for 344 yards and a touchdown as the Bulldogs won their second consecutive game. Mississippi State has won three of four entering its game at Arkansas next week.

Johnson had scoring runs of 9 and 1 yards and finished with 41 yards rushing on 11 carries. Jo'Quavious Marks rushed for 58 yards and a score.

AUBURN, Ala. — Bo Nix passed for 276 yards and a touchdown and ran for two more scores and No. 18 Auburn's defense made a number of big stops in a 31-20 victory over 10th-ranked Ole Miss on Saturday night.

The Tigers (6-2, 4-1 SEC) remained the top challenger to No. 3 Alabama in the Western Division with Nix winning a quarterback duel with Heisman candidate Matt Corral.

The Rebels (6-2, 3-2) had their three-game winning streak end after squandering four second-half scoring chances, three with failed fourth down passes in field goal range. Plus Jaylin Simpson intercepted a pass in the end zone — only Corral's second this season — midway through the fourth.

Nix completed 22 of 30 passes and ran for 30 yards. Tank Bigsby ran for 140 yards and a touchdown for the Tigers.

Corral had his 19-game streak with a touchdown pass end with a 21-of-37, 289-yard performance. He did run for a score, returning after getting carted to the locker room with an apparent left ankle injury in the first quarter.

Jahcour Pearson caught seven passes for 135 yards for the Rebels, who have been short-handed at wide receiver. The Western Kentucky transfer came in with 30 yards this season.

Ole Miss stayed alive late with an Auburn fumble across midfield. But the comeback bid ended on a fourth-and-3 incompletion from the 18 when the Rebels also were flagged for two penalties.

NASHVILLE, Tenn. — Tyler Badie set the offensive pace for the Missouri Tigers on Saturday afternoon with two rushing touchdowns and 294 total yards in a 37-28 win over Vanderbilt.

After allowing Missouri (4-4, 1-3 SEC) to take a 10-0 first-quarter lead, the Commodores rallied. An interception by Vanderbilt’s Max Worship at the Commodores’ 2-yard line set up a scoring drive, culminating with Mike Wright hitting Cam Johnson over the middle for a 7-yard TD.

The Commodores (2-7, 0-5), who have lost 18 straight SEC games, pulled ahead 14-10 in the second quarter on a 10-yard run by Patrick Smith. After a fake Vanderbilt field-goal attempt resulted in a 5-yard rushing loss by kicker Joseph Bulovas, Missouri took over with 15 seconds left in the first half.

That was enough time for Connor Bazelak to fire a 45-yard scoring strike to Keke Chism, giving the Tigers a 17-14 lead at halftime.

Missouri extended its lead to 24-14 on a 15-yard TD run by Badie with 5:28 left in the third quarter. Mike Wright connected with Gavin Schoenwald for a 4-yard TD — keyed by Wright's 70-yard run on first down — on the ensuing drive to pull the Commodores with three points heading into the final quarter.

Harrison Mevis kicked field goals covering 32 and 52 yards to give Missouri a two-score lead at 30-21 with 5:59 remaining.

Badie's 73-yard run on first down set up Tyler Macon's 2-yard TD run to wrap up the the Tigers' first conference win of the season.