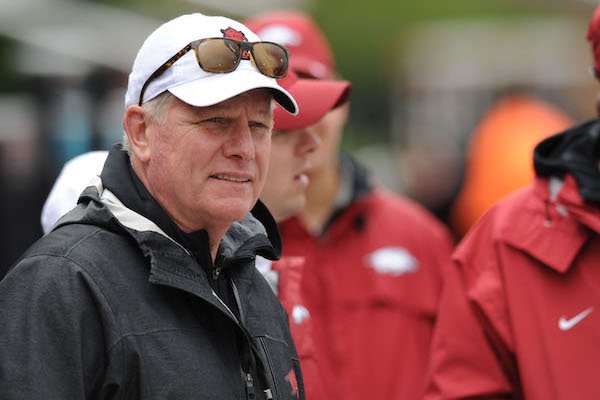 The order of finish for the University of Arkansas men’s team at Friday’s SEC cross country meet in Columbia, Mo., wasn’t what Coach Chris Bucknam expected, but the outcome went just as he had planned.

The No. 6-ranked Razorbacks won their second consecutive championship with 40 points after Ole Miss won in 2018 and 2019. It was also the 27th SEC title for the Razorbacks.

Ole Miss had to settle for second with 59 points.

Alabama had the individual winner in freshman Eliud Kipsang, who finished the 8,000-meter Gans Creek course in 23:33.5, but the Crimson Tide were fourth in the team race 132 points as host Missouri took third with 105.

“Amon competed really well and challenged for the individual title and beat last year’s champion,” Bucknam said. “Amon got beat by an outstanding athlete. Kipsang and Amon could very well be in the top 10 at the NCAA Championships.”

“If I was to rank my guys before the race, Jacob McLeod and Myles Richter would have been fifth and sixth, but they were our second and third guys,” Bucknam said. “They just did a phenomenal job, and I think that will bode well for us down the road at nationals.

“Certainly Jacob and Myles ran their best races of the year, and we needed to see that with those guys.”

Bucknam said he gave McLeod a needed rest period after last year’s outdoor track season, but that Friday’s race shows he’s getting back to top form.

Friday’s conditions— 48 degrees with a windchill of 38, on a rain-soaked course and heavy winds — weren’t conducive for Kibet, Cheboson and Boit, Bucknam said.

“They’re just not cold weather runners,” Bucknam said. “But overall, our guys did a great job under crappy conditions.”

The Razorbacks won their 27th SEC cross country title in 31 meets since joining the conference for the 1991 season.

Arkansas won its final 17 Southwest Conference meets and first 17 SEC meets under the late John McDonnell, so it’s a stretch of 44 championships in 48 years going back to 1974.

“Our kids have been working really hard, and I didn’t really back off their training these past couple weeks,” Bucknam said. “Our sights are set on the NCAA meet, and I feel like we’ll be in a better spot in three weeks.”

Buckman has led the Razorbacks to 25 SEC championships — including 10 in cross country and 15 in indoor and outdoor track and field — since coming to Arkansas in the summer of 2008.

“The SEC is very competitive, and what I’m really proud of is the fact we win on the track as well,” Bucknam said. “To beat a team like Ole Miss, that puts all their eggs into that distance running basket, shows the tenacity of our guys.”

Arkansas has won 51 conference cross country championships with the first being in 1950 in the SWC.

“Those wins back in the Southwest Conference were phenomenal, and we’re glad we’re able to continue that tradition in the SEC after John retired. That’s pretty cool.”