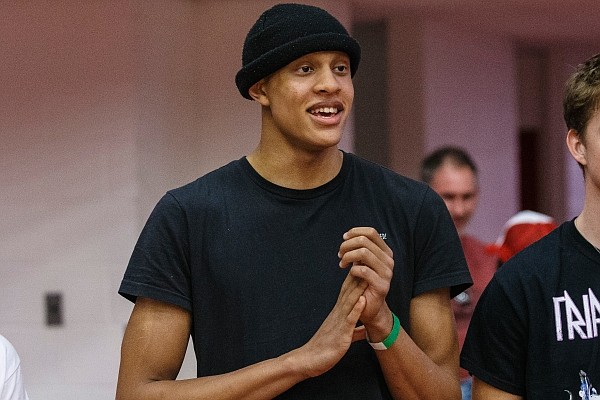 Jordan Walsh watches the Razorbacks' Red-White game on Sunday, Oct. 17, 2021, during the first half of play at Barnhill Arena in Fayetteville.

When ESPN 5-star and top 10 basketball prospect Jordan Walsh announced his decision to commit to the University of Arkansas, he and his parents John and Sandra were on the same page.

ESPN rates Walsh the No. 2 small forward and the No. 7 overall prospect in the nation for the 2022 class. He and his parents officially visited Arkansas in June and also visited Texas, Arizona State, TCU and Oklahoma before wrapping up with a trip to Kansas on Sept. 26.

John and Sandra Walsh spoke to the Arkansas Democrat-Gazette about their son’s decision to become a Razorback.

ADG: What went through your mind when Jordan said he was going to Arkansas?

Sandra: It was really OK, I mean at that point it was a no-brainer. I think I probably said to him a couple of times in the final days, “Are you sure? Make sure you’re sure,” and he said, “I’m sure.” I’m sure because it was kind of close there for a minute, but at the end of the day I got it. I was good. I was on board with him.

ADG: Why were you on board?

Sandra: Coach Muss started recruiting Jordan in May of 2020 and did not stop. Did not stop. I mean it was consistent. We went to campus in June and from that point forward. Coach was building the relationship with not just Jordan, but with us, too. It was kind of like a marathon that he was running versus something where he was trying to sprint towards the end. It was strong, steady and consistent the entire time.

My husband can talk about the style of play and all that good stuff. But for me, the relationship-building was top of the line because everything being equal with all of the great schools, and I will say this: He had some great choices from some great schools, great coaches, great teams. But it was just something special about how Coach Muss and the staff went about getting things done and building that relationship.

I think what probably impressed Jordan the most is when we walked in … they brought us into this conference room when we were on campus and showed him what he would be doing from Day 1 and how they would be developing him and he was very impressed as was I. I was like, “Man, oh man.” I mean, Coach Muss did some homework. While everybody else was closed in for covid, Coach Muss, even though he never laid eyes on Jordan, somehow he studied his game and he knew his game by the time we got to campus in June.

ADG: When did he tell you it was Arkansas?

John: We sort of narrowed it down, and I think the way my wife and I saw our role in this whole thing was just to make sure there were no real bad choices and leave several choices for Jordan, all of them being excellent, and let him choose. So we went through a narrowing down process, and we had a couple of schools left there at the end, but when we had our discussion as a family, we still had one visit left and that was Kansas, so we hadn’t completed our decision because we wanted to go and take that visit as well.

But after we completed that visit, after the conversations that we already had, and then we were able to make that decision that Arkansas was the school. Just a couple of schools left in the conversation at that point, and after the last visit it became clear to Jordan his choice.

ADG: Your reaction when he told you he wanted to go to Arkansas?

John: I was pleased. I was very pleased because the whole experience we had through the whole recruiting process left me feeling great about it. I had no apprehensions about that choice because we had built those relationships over a length of time and it became real clear to me that the coaching staff was very transparent.

ADG: Sometimes prospects and parents will reach out to former players, parents or anyone along those lines with past relationships with the staff. Did that happen?

ADG: Talk about what were some of the things that were said to you about Arkansas?

I talked to Ms. [Linda] Williams [Jaylin Williams’ mother], so yes we tried to make sure we got an opportunity to talk with at least one or two parents, and it was usually me talking with the moms because moms are concerned about a lot more than just what’s going on the basketball court [laughing].

So we talked about a lot of things. We talked about the academics, and the daily living, and how the kids are being taken care of, and how it was going with tutors when they’re on the road. Those are the kind of questions I really had, and the moms did a great job of addressing those with me.

John: Just kind of listened in on my wife’s conversations with the moms, and it was reassuring as well. That was probably the extent of my conversations.

ADG: I know John was really impressed with the Arkansas fan base. Sandra, what was your impressions of the fan base?

Sandra: [Laughing] What word can I describe? Ferociously supportive. [Laughing] I mean I love it. I was telling Coach Muss, I told him I loved how protective the fans are of their kids. It is just amazing to me. I mean you talk about taking over social media, my God. It was amazing and I have never seen my son smiling so much to see that fan base, and then one time before he made his decision they were talking about, what, getting him 5,000 followers or something … And how they came out and worked on that. It was … all I can say is amazing and incredibly, ferociously supportive.

ADG: John, what are some of the things that come to mind when you think of the Arkansas fan base?

That just let me know that fan base really gets behind their players and the coaches and all the athletics and that is really reassuring to see that kind of support.

ADG: There were a lot of factors such as basketball, academics and other things that went into his decision, but did the fan base help?

John: Of course, you want to go where you feel like you would be appreciated. You want to go into a situation where you feel that and the Arkansas fan base absolutely did. I mean from the beginning of our visit, it was phenomenal and ever since that it’s been great, positive feedback. Even the day of his announcement, there were a couple of Woo Pig Sooie Hog fans in the house. I don’t know where they traveled from, but they were there and showing support. It doesn’t drive the decision but it sure helps you feel comfortable about your decision when you feel like the fan base will be supportive and encouraging when you show up on the campus.

Sandra: That was really, really important for us with Jordan not being from Arkansas. So we were always thinking and of course you know, “Well if we go outside of the state, is he going to be welcomed? Are people going to show him as much love as they would at home?” Arkansas went above and beyond and proved that wasn’t the case and put us at ease.

ADG: Sandra, I understand you’re the Hog calling expert in the family. [Lots of laughter]

Sandra: Well, I did have a lesson, but that was back in June. I’ll probably have to have a review before I’m considered an expert [more laughter].

Sandra: I actually do like it. I’ll let my husband say how he felt when we went to dinner there one night. We were on one side of the restaurant, and all these people on the other side of the restaurant. When I first walked in, I was like, “Wow, this must be pretty good food because the place is filled up.” They took us in the back, and all of sudden all these people started standing up and doing the Woo Pig Sooie song. I can’t remember who it was sitting next to me, but they were telling me how to do it. They were teaching me so, I was doing it, too. I love it.

John: When doing official visits, you have to try and keep your game face on, and all of sudden my wife breaks out into this Woo Pig Sooie song, dance and arm pumping, and I just couldn’t believe it. If you had told me that my wife was going to do the Woo Pig Sooie dance on that official visit, I would’ve ate your hat. Sure enough she did and she enjoyed it. We had a great time. The fans were awesome. The environment, it all was good. So we had a really good time. So yeah, we’re probably going to need a refresher [Hog call], but we’re definitely going to be on board.

ADG: Anything else you would like to mention or expand on?

Sandra: We’re certainly looking forward to being a part of the Razorback family. It’s so great that Nick and Jordan have had a prior relationship and played together in New York. And we didn’t even know that they stayed in contact. So you never know what’s going to happen, and that’s why you have great relationships with everyone you meet. We’re strong believers in that, and just glad, and can’t wait to see these guys get together, and all these guys play together in 2022. Woo Pig Sooie.

John: I think for me, you hear the word “family” tossed around quite a bit in sports now, in teams and organizations, but I really got that family feel in Arkansas with everybody that we met. So we’re really looking forward to being really close to that and being a part of that. That family environment, it means a lot to us and to experience that on a large scale like the University of Arkansas in Fayetteville means a lot. So we’re looking forward to experiencing that family environment.

Sandra: The only other thing I can say is I haven’t seen my son this outwardly happy since they won the championship here at Faith Family. He’s genuinely a happy kid anyway, but this added excitement to his happiness and that just means he’s really at peace with the decision that he’s made.