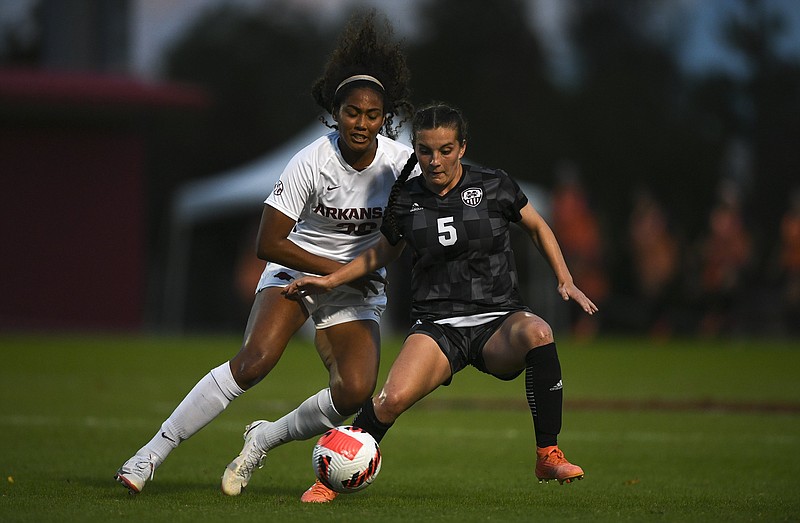 Parker Goins added more honors to her stellar soccer career at the University of Arkansas, earning SoputMidfielder of the Year and All-SEC first-team accolades, which were announced Sunday.

The senior from Broken Arrow, Okla., leads a group of six Razorbacks to earn postseason honors.

Goins is joined on the All-SEC first team by teammates Bryana Hunter, Anna Podojil and Taylor Malham. Hunter was also honored as league's Scholar-Athlete of the year. Kayla McKeon was also named to the second team for the second straight year.

Goins set the school’s all-time points record, scoring her 105th point with her goal in Arkansas' 6-1 win over Missouri on Oct. 15. She also has the most assists in program history with 32. Goins has nine goals this season and leads the Razorbacks in assists (8), shots (51) and shots-on-goal (27) this season.

Hunter leads all position players in minutes with 1441. As a defender, she has scored two goals this season and notched one assist. Hunter currently holds a 3.98 grade-point average as a biochemistry major. She was also named to the SEC Community Service Team earlier this month, and twice selected SEC Defender of the Week this season.

Podojil leads the Razorbacks with 11 goals and 28 points and leads the SEC with two points-per-game. This is her third-straight appearance on the All-SEC first team. Malham returns to the all-conference squad after joining it in 2019. Malham has netted seven goals for the Hogs and has recorded two braces this season. She was named SEC Defender of the Week for week seven.

McKeon broke the Hogs’ all-time games played record with her 94th, and currently sits at 102. She has started all but one match this season and has notched five goals and six assists. She scored two goals in the 6-1 victory over Missouri.

Forward Sophia Aragon was voted to the all freshman team. She has played in every match this season, playing an average of 43 minutes, leading all freshmen for Arkansas. She has also contributed five assists.

Arkansas opens play in the SEC Tournament on Tuesday against the Georgia-LSU winner at 5 p.m. in Orange Beach, Ala. The match will be televised live on the SEC Network.