Goldsmith coached on both sides of Arkansas-Rice 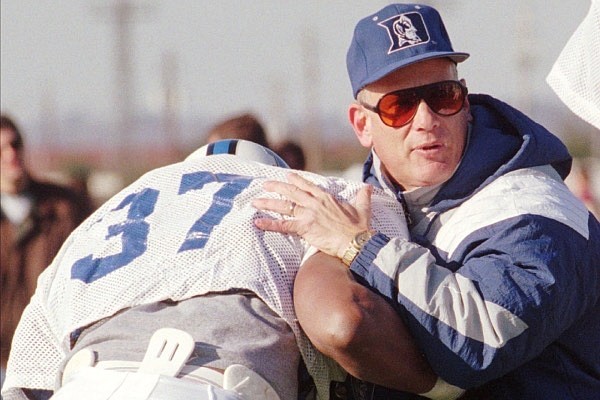 Fred Goldsmith of Duke works with Kentucky's Donte' Key and other lineman during practice Wednesday, Dec. 20, 1995 in Montgomery, Ala., in preparation for the Blue Gray All-Star Classic on Christmas Day. Goldsmith resurrected the Duke program in 1994 and decided to stay even though Miami and several other schools came calling. (AP Photo)

Defensive coordinator Goldsmith was among the Air Force assistants Ken Hatfield brought with him to Arkansas while retaining veteran Arkansas assistants Ken Turner and Jesse Branch in 1984.

Branch, a 1961 and ’62 letterman for Frank Broyles’ Southwest Conference champions and 1975-85 Arkansas assistant, and Goldsmith were teeing off on a summer off day.

“A couple of fellows drove up in their golf carts,” Goldsmith recalled. “They wanted to play for some money.”

Newcomer Goldsmith didn’t know the men but knew his wallet.

“I forget what they wanted to play for but I said, ‘Jesse, I only have $5 with me,” Goldsmith recalled. “Jesse said, ‘Don’t worry about it. It’s like playing Rice.’ And he was right.”

They prevailed like Arkansas prevailed 12 of 13 times that Branch played or coached against Rice.

“I wake up the next morning and my mind goes back to five years earlier with Jesse Branch,” Goldsmith said “And I say, ‘Oh, my gosh! What have I done?'”

Turned out Goldsmith, and Hatfield succeeding him in 1994 upon Goldsmith coaching Duke, did Rice well.

His 1990 Owls beat the Jack Crowe-coached Razorbacks in Little Rock.

Relations so frosted between Hatfield and athletic director Frank Broyles that Hatfield seized the Clemson job following his 1989 SWC championship.

Their fences so mended that Hatfield eulogized at Broyles’ 2017 funeral.

But in the early 1990s among Hatfield loyalists, Arkansas wounds ran emotionally deep.

Both relish their Rice time, yet indelibly remain Razorbacks.

“That first year we beat Georgia Tech, which was a big win,” Goldsmith said. “I’m running off the field and the first thing that came out of my mouth was, ‘Woo, Pig, Sooie!’

"A guy from Sports Illustrated was standing right there and put that in his story. I caught the devil from the Duke people because Arkansas had just beaten us for the national championship in basketball. But once you’re a Razorback, you’re always a Razorback.”