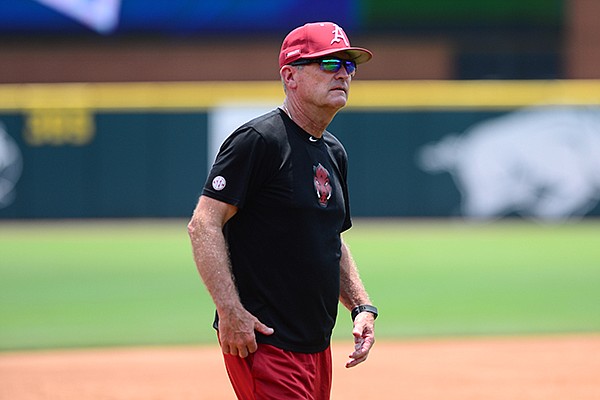 FAYETTEVILLE — Arkansas baseball fans are being invited back to the ballpark this fall.

After a year of closed practices due to the covid-19 pandemic, the Razorbacks will begin fall practice Thursday with the gates open to anyone who wants to attend.

The team is scheduled to scrimmage Thursday at 3:30 p.m. and Friday at 6:30 p.m. Both scrimmages will last around five innings.

“It gives a little bit of a feel of a real game with people in the stands,” Van Horn said. “People can come to every scrimmage we have. Our practices are open now and we want people to come watch us practice.

“It’s good for the new players in our program to feel that, so to speak, and there are some other eyes on them besides just the staff and the team.”

Van Horn said the Razorbacks won’t play exhibition games against other teams this year like they did in the falls of 2018 and 2019, when they played Oklahoma, Oklahoma State and Wichita State. Fall exhibitions weren’t played last year due to the covid outbreak.

“Something we’ve noticed since we’ve been able to play outside competition, if you do play outside competition it really changes the way you run fall practice, and it takes away from fall ball, in our opinion, with certain teams,” Van Horn said. “You have to prepare for those games and then you might not be able to scrimmage correctly for another week.

“We just want to get our pitchers on the mound and we need to see our guys play more. You can only play one team (in an exhibition) and when you scrimmage you can play two teams. We need to see these guys.”

The fall will give Arkansas’ coaches a chance to evaluate not only newcomers, but some returning players in new positions. Van Horn said Cayden Wallace will practice in center field and Brady Slavens will practice in one of the corner outfield positions.

Wallace, a high school infielder, was a Freshman All-American as a right fielder this year.

“He’s one of the fastest players on the team; a lot of people don’t realize that,” Van Horn said. “Those who watched him run down the line last year probably understand how fast he is. He can run. He took a lot of fly balls in center in practice this year. This summer he also worked on it a little bit and he played right field in the Cape Cod League. We talked to him about playing center field last spring, so his mindset was to work there.

Slavens, a first baseman in 2021, played outfield in previous stops at Wichita State and Johnson (Kan.) Community College. Van Horn said Slavens will spend around 90% of his time in the outfield this fall, but will still take some reps at first base.

“He wants to play outfield,” Van Horn said. “He thinks that is going to be his position in pro ball and it might be.”

There are several outfield candidates in the program, including past starters Braydon Webb and Zack Gregory. The Razorbacks have also added transfers Jace Bohrofen of Oklahoma and Landrey Wilkerson, a Van Buren native who was an All-American at Crowder (Mo.) College this year.

Bohrofen was rated a top-40 recruit by Perfect Game out of Westmoore High School in Oklahoma in 2019.

“We recruited him hard out of high school and it came down to us and Oklahoma,” Van Horn said. “He’s from Oklahoma City, his brother was already at OU, his dad played ball at OU — we knew we were fighting uphill. I think he really, really liked it here and it was a really tough decision for him.

“Once we saw he was available again we called him, and it didn’t take very long. He’s a left-handed hitting outfielder who has a lot of potential. He had a great summer in the Cape Cod League and he hit over .300 for most of the summer hitting in the three hole and hitting with a wood bat.”

Van Horn said transfers Chris Lanzilli of Wake Forest and Michael Turner of Kent State will be evaluated at first base, and he is confident in Slavens playing there if needed.

At third base, Arkansas will look at a pair of highly recruited freshmen — Peyton Stovall of Haughton, La., and Drake Varnado of Port Neches, Texas.

Stovall was projected by some as a first-round draft pick earlier this year, but went undrafted due to a high asking price for a signing bonus. Varnado turned down a 17th-round offer from the Arizona Diamondbacks.

“(Varnado) has the range, the arm, the skills,” Van Horn said. “He could be our shortstop of the future, but he’s got to go out and show that.

“Peyton Stovall is an outstanding player, an outstanding hitter. He could play third, second, short. He hits left handed and Varnado hits right, so that’s a good mix.

“I see those two guys jumping right in the middle of our team this year.”

Stovall tweaked an abdominal muscle shortly after arriving in Fayetteville, Van Horn said, and won’t play in the scrimmages this weekend.

Van Horn called the middle infield of second baseman Robert Moore and shortstop Jalen Battles the best in Division I baseball. Battles won’t swing a bat until later this year after undergoing surgery to repair a dislocation to his non-throwing shoulder that was suffered while playing summer ball in his hometown of San Antonio.

At catcher, Arkansas must replace three-year starter Casey Opitz. The battle behind the plate will include the Kent State transfer Turner, sophomore Dylan Leach, freshman Max Soliz and transfer Leyton Pinckney of Houston.

The Razorbacks must replace their top two pitchers, starter Patrick Wicklander and reliever Kevin Kopps, the consensus national player of the year and winner of the Dick Howser Trophy and Golden Spikes Award.

Van Horn said right handers Connor Noland and Mark Adamiak will be among 10 pitchers who take the mound during Thursday’s scrimmage. Both pitchers are “throwing the ball incredibly well,” Van Horn said.

Twenty-two pitchers are scheduled to throw in scrimmages over the next two days, Van Horn said.

“I think this fall is going to be real important for some of the new players to really step up and show us what they can do,” Van Horn said. “We’ve got a lot of quality returners back who have a lot of experience, so on their end I want the returners to continue to work hard, lead our younger players and take another step in their development.

“For the new guys it’s really important — including the transfers — to come in here, learn how we work, understand where we’re coming from and show us what they can do, maybe at multiple positions, or pitchers showing how they pitch in tough situations.

“We have a lot of talent in here….We’ve got to make some decisions. We have all fall and offseason and early next year to figure it out. We do have a lot of questions, but we do have a lot of options. It should be a very, very interesting fall as far as competition, because there is a lot of it.”

In addition to the injuries to Battles and Stovall, coaches will also limit Wallace (wrist soreness), Slavens (arm soreness), and Peyton Pallette (elbow strain) in practice. Pallette, the team’s potential No. 1 starter in 2022, could return to scrimmages by late September, Van Horn said.

“It’s typical fall ball — we have some guys nicked up here and there,” Van Horn said. “It’s a time to recover, but it’s also a time to get better and experiment a little bit.”

Assistant coaches Matt Hobbs, Nate Thompson and Bobby Wernes return this year, but the Razorbacks have added a pair of former players to other staff positions.

Cullen Smith, a starting corner infielder in 2021, joins the staff as a student assistant, and Blake Baxendale will work with the team’s catchers while he finishes work toward a degree.

Baxendale lettered for the Razorbacks in 2014 following a redshirt season. His older brother, former Arkansas pitcher DJ Baxendale, is also on staff as a graduate manager.

“Cullen played for us last year and has been in our program a couple of years,” Van Horn said. “When Cullen came to me a few years ago, his dad and I talked and Cullen wanted to coach. One reason he wanted to come to an SEC school like ours was to learn and to get into coaching. He turned down a (professional free-agent) contract in early August, I think, and he brings Division I experience and the ability to talk to the younger guys. He can show the guys how we do things. I think he’s going to be a good coach. He’s jumping in feet first and gave up a few things to do it, and I’m excited about that.

“Blake was in our program for a couple of years and ended up going to junior college. He’s been coaching in summer league and wants to get all of his schooling finished up. He contacted me this summer and we talked in person, and I think he really wants to gain some experience on this side of it, the college level. But I think the thing he wants to do in the future is be a high school baseball coach, head coach someday. He’s done a good job and has been in here a month or so. He’s been in our program, knows our expectations around here, knows what I expect and is learning what the other coaches are all about.”