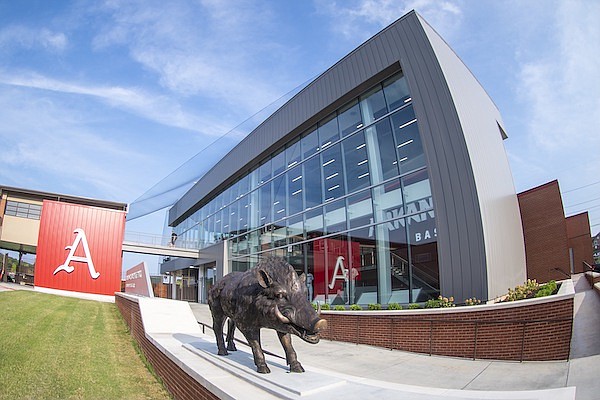 The sculpture, which is located near the west entrance of the newly opened Hunt Family Baseball Development Center adjacent to Baum-Walker Stadium, includes a plaque that refers to it as “Van Horn Hog.”

“The Van Horn Hog, named in honor of legendary Arkansas Razorback Head Baseball Coach Dave Van Horn, is symbolic of the indomitable fighting spirit of the wild Razorback,” a plaque reads below the sculpture. “The Razorback baseball program is nationally recognized as a skilled and spirited group possessing a fiery determination to prevail. The Van Horn Hog is dedicated to the legions of fans across Arkansas and the nation who share that same unwavering, fighting Razorback spirit.”

The sculpture was dedicated by the family of Mark Waldrip, a former University of Arkansas trustee whose 10-year appointment to the board ended in 2020.

Waldrip served six years on the board of trustees' athletics committee and helped oversee multiple facility improvements for the Razorbacks’ baseball program, including the construction of the $27 million Hunt Center, as well as the $9.1 million Fowler Center that opened in 2014 and includes an indoor practice field.

In a video posted to the Razorbacks’ baseball Twitter account, Waldrip told Van Horn he hopes the sculpture will “memorialize the fighting spirit of the Razorback that you are to Razorback baseball.”

“That’s awesome,” Van Horn said on the video. He later appeared to choke up as he said, “I don’t know what to say. Thank you.”

In the video, Arkansas athletics director Hunter Yurachek said he is hopeful the sculpture will become an attraction for fans on game days.

Van Horn is entering his 20th season as the Razorbacks’ head coach. He has a record of 750-402 at Arkansas.

Under Van Horn, the Razorbacks have won the SEC regular-season championship twice and the SEC Tournament once. Arkansas won both SEC titles this year.

In July, Van Horn signed a long-term contract extension that could run through 2031.

“You’re going to be here another 10 years at least,” Yurachek said in the video.

“I hope so,” Van Horn replied.