Razorbacks will take victory, despite optics 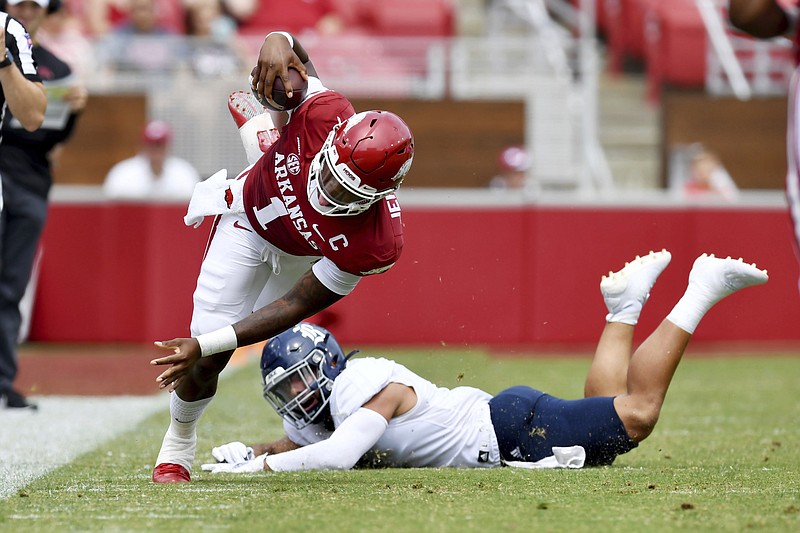 Arkansas quarterback KJ Jefferson (1) is tripped up by Rice defender Cameron Montgomery (1) as he runs the ball during the first half of an NCAA college football game, Saturday, Sept. 4, 2021, in Fayetteville, Ark. (AP Photo/Michael Woods)

FAYETTEVILLE — It is widely known that an ugly win is better than a pretty loss.

With 4:05 to play Saturday at Reynolds Razorback Stadium, KJ Jefferson found Tyson Morris alone in the end zone for a touchdown as Arkansas took a 31-17 lead. It was the first time it appeared the home team was in control for a victory.

Dominique Johnson would score on a 3-yard run with 58 seconds to play to set the final score at 38-17, which sounds better than reality.

It wasn’t really ugly, but it wasn’t pretty. It’s comparable to the answer of what to call the person who finishes last in medical school: a doctor.

The Razorbacks were winners, but they had 13 penalties for 117 yards. They amassed only 335 yards of offense, 207 of which came on the ground. There’s no doubt the Texas Longhorns will stack the line of scrimmage this Saturday and dare Jefferson to beat them through the air.

The redshirt sophomore quarterback finished 12-of-21 passing for 128 yards with 1 touchdown and 1 interception.

After the touchdown pass, his quarterback rating jumped to 114, his best mark of the day.

The longer the game went, the better he looked. Real experience can be gained only in a game.

As suspected during August camp, the Arkansas defense dominated.

The unit had far too many penalties but also had three interceptions, including two by All-American candidate Jalen Catalon and one by Montaric Brown.

Other than penalties, the second half was much more entertaining than the first half.

It was an opening half that could have been an audition for the eighth level of Dante’s Inferno.

The most consistent action was in the stands, where tens of thousands tried to fan away the heat and humidity.

Why anyone would play a 1 p.m. game on the first Saturday in September in the South is mind-boggling, and you can’t blame TV. The game was available only by streaming on the internet.

If not for the Arkansas defense, the deficit would have been much bigger than 10-7 at intermission.

Rice had four consecutive possessions that started in Arkansas territory, thanks in large part to a blocked punt, a fumble and an interception. The Razorback defense held the Owls to just 10 points in that span.

Early in the third quarter, Razorback fans had to be concerned.

On the Hogs’ first possession at their own 47 after a shanked punt by the Owls, they surprisingly went for it on fourth and 2 at the Rice 45 and came up a yard short.

That’s when Jefferson stepped up and began to show some leadership.

After a 42-yard kickoff return by LaDarrius Bishop, Jefferson passed 31 yards to Morris. The redshirt sophomore quarterback would cap the drive by running for a 5-yard touchdown. He also had a 34-yard scoring run earlier in the game.

Rice tried to keep its momentum going, but Bumper Pool and Catalon teamed up to force a 1-yard loss on a fourth and 1 for the Owls.

Jefferson then drove the Hogs 65 yards for a Cam Little field goal that tied the game 17-17.

Catalon got his first interception, and the Razorbacks drove 4 yards to regain the lead.

At that point the defense was playing like wild hogs, and a very well-coached Rice team didn’t have the speed to catch up.

Sam Pittman said all week Rice was a great opponent for Arkansas to open the season with, and he was right.

The Owls were experienced and tested the Razorbacks for three quarters.