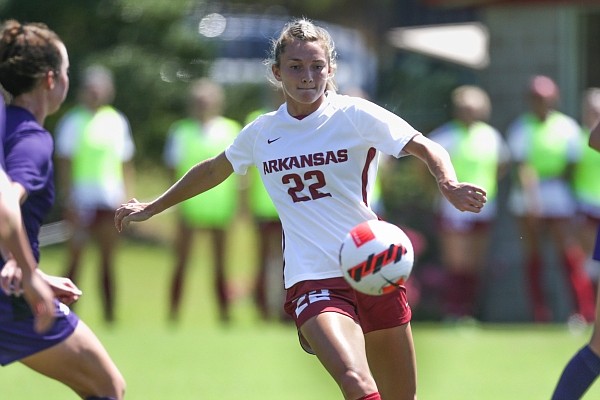 FAYETTEVILLE -- The University of Arkansas soccer team scored in bunches Monday afternoon in a 6-1 victory over Stephen F. Austin in front of 1,262 at Razorback Field.

Arkansas controlled play throughout, allowing just one shot by the Lady Lumberjacks over the final 45 minutes and just four in the game.

Arkansas Coach Colby Hale was pleased with how the Razorbacks created scoring chances. The Razorbacks scored twice in the first eight minutes, then used a three-goal flurry in a little more than 10 minutes early in the second half to seal the victory.

"We needed to do things we have been doing well and add some others," Hale said. "We've been working. I thought we were better with the ball today, creating some chances. So yeah, we're pleased. There's some things we've got to get better at, but yes."

Taylor Malham scored two goals, while Anna Podojil added a goal and two assists. Parker Goins chipped in with a goal and an assist for the Razorbacks (2-2).

Malham said the team did a good job of keeping its focus in the final half after taking a 3-0 halftime lead.

"We had some players that came in and did a great job and kept that standard the last 45 minutes," Malham said. "I think we're in a good spot. We had a few rough times at the beginning, but we played some really good teams. I think we're getting into the groove of things."

Goins scored off a feed from Podojil 70 seconds into the match. Malham scored off a rebound in the ninth minute, then Podojil scored on her own in the 22nd minute for a 3-0 Arkansas advantage.

The Razorbacks didn't let up in the second half. Kayla McKeon scored off an assist from Goins less than three minutes into the half. Malham added her second goal, and Ava Tankersley got in on the scoring in the 61st minute for a 6-0 Arkansas lead.

Hale said getting players more minutes, especially off the bench, was a good thing. He also pointed out the team probably needs to finish more.

Carli Arthurs got the Lady Lumberjacks (1-3-1) on the scoreboard with just over nine minutes left.

The Razorbacks, who improved to 14-3-2 at home over the past two seasons, travel to San Antonio to participate in the Texas-San Antonio Invitational this weekend. They face Eastern Washington on Friday evening at 5, then take on Lamar on Sunday beginning at 11 a.m. Arkansas returns home Sept. 17 to begin SEC play against Tennessee.