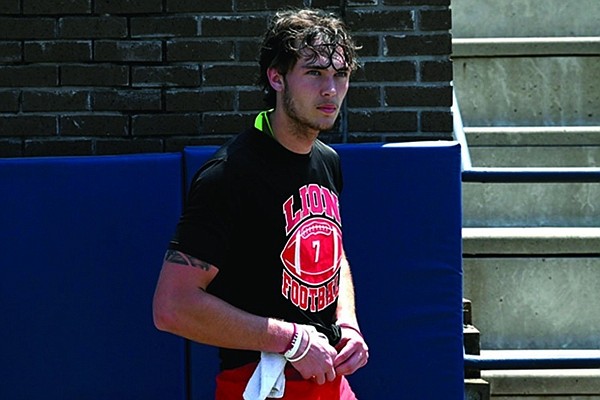 Dax Courtney, from Clarendon, plays in a 7-on-7 event at Pulaski Academy High School on Friday, June 18, 2021.

Courtney, who had caught one pass for 10 yards before the injury, remains in good spirits despite the setback.

“Get ready for the comeback,” Courtney said Tuesday. “It’s coming. “I’m doing good mentally. Trying to keep my faith and remember everything happens for a reason.”

Courtney, who played the last two years at DeWitt when his dad was the head coach, was Arkansas' second commit of the 2022 class.

“This is one of the only times in my career that I have ever gone into the season feeling like we really do have a chance to win a state championship,” Courtney said before Friday night’s game.

Courtney attended the Razorbacks’ 38-17 season-opening win over Rice and plans to be at Arkansas' game against Texas on Saturday.

“Just let the Razorback family know that I will be back and we will still be chasing that (national championship) on the Hill," he said.

Courtney had 36 receptions for 623 yards and 7 touchdowns as a sophomore.

Mark Courtney is understandably disappointed with the injury, especially since his son battled through a dislocated knee last season, although he rehabbed and played the last half of the 2020 season.

The younger Courtney had surgery in January and was fully cleared this summer.

“It sucks, but it is what it is,” Mark Courtney said. “Just get back to work and get ready for next year for him.”