Morris looks ahead to Texas after key grab 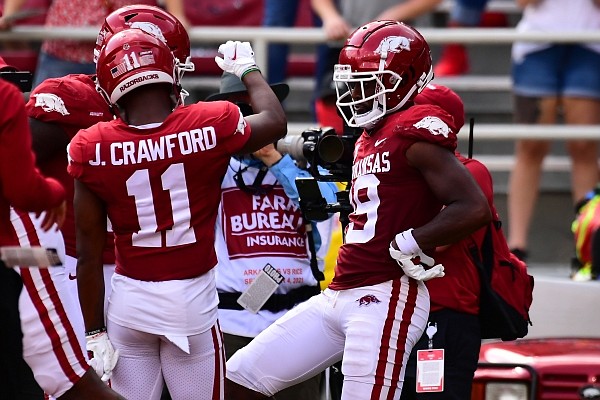 Arkansas receiver Tyson Morris celebrates after making a touchdown catch in Arkansas' season-opening victory over Rice on Sept. 4, 2021, in Fayetteville.

It might not have risen to the level of Franco Harris’ Imaculate Reception in the 1972 Super Bowl, but Arkansas wide receiver Tyson Morris’ third-quarter catch against Rice was his team’s biggest one on Saturday.

With the Razorbacks trailing 17-7 just into the second half, redshirt senior Morris hauled in a 31-yard toss from KJ Jefferson at the Rice 26.

Morris, who has 27 career catches for 294 yards and four touchdowns, did so one hand with Owls defensive back draped over him and his other arm locked down.

The play sparked Arkansas to 31 unanswered points and a 38-17 season-opening win.

“It was a catch that had to be made,” Morris said. “We needed a spark on offense and we needed something to get us going. When the ball is up in the air, it is our job to make plays and that’s what I did.”

Morris ended the game with three catches for 42 yards, including a 8-yard touchdown catch.

Arkansas (1-0) moves on to a Saturday night game against old rival and No. 15 Texas (1-0) in a 6 p.m. ESPN nationally televised game at Reynolds Razorback Stadium.

Morris, the son of former Arkansas basketball player Isaiah “Butch” Morris, whose Razorbacks had some big wins over Texas back in the day, isn’t surprised the game is a sellout.

“That was what I expected as a big a rivalry as it is,” Morris said. “Sold out crowd, everybody loud, everybody screaming. I feel like the crowd should be on our side and will help us out against Texas.”

Morris expects those number to bigger this Saturday.

“Treylon is back up on his feet after missing some practices,” Morris said. “I feel like he is back to being himself again, well he was never not himself, but he has got his feet up under him again. He should be even better than he was last week.”

Reciever Trey Knox (6-5, 215) was working with the tight ends some in Tuesday’s practice.

“I think he can bring a lot of versatility to the tight end room,” Morris said. “He is still with us at receiver as well. He is just splitting between the two.

“Ketron is going to be a great player,” Morris said. “He got in and played physical. He is one of the most physical guys we had out there Saturday. I want to give a big shout out to Ketron for being as physical and playing as confident as he did.”