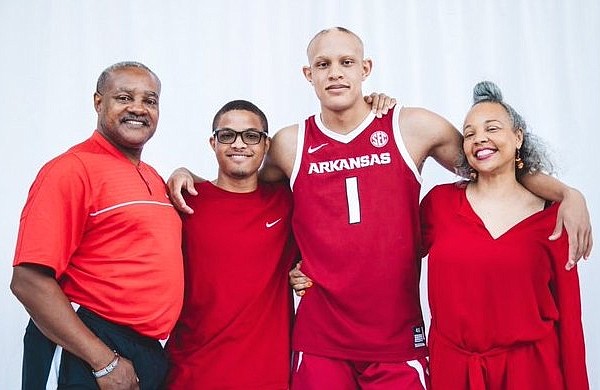 Branson (Mo.) Link Academy is expecting 50 Division I college basketball coaches on Thursday with Arkansas' Eric Musselman being among them.

On the first day Division I coaches can hit the road recruiting this month, Musselman will be on hand to see Razorback 2022 5-star recruiting target Jordan Walsh (6-7, 200), ESPN’s No. 7 player nationally.

“It is very exciting to basically put together a top-10 roster in year No. 1,” noted Perry, a 17-year college assistant. “The buzz and the excitement that the people in the community and surrounding areas have, too, is also very exciting.

“We are expecting to host over 50 coaches on Thursday and the guys are super excited about that.”

Link Prep has had two post-graduate teams the past 10 years, but this is the first year to have a high school – named Link Academy - playing a national schedule.

Adam Doynes, the program’s founder, has a clear vision of how he wants it to continue to grow.

The campus is currently on the ground of Camp Kanakuk in Branson, but the faith-based program is headed for something bigger.

Link, which has been funded by tuition and donations so far, is scheduled to break ground this fall on a sports academy similar to Bradenton (Fla.) IMG Academy, which has nine sports and 13 teams.

Link is in the process of putting together an endowment and plans to add men's and women's golf, tennis, cross country and women's basketball.

“The prayer and hope is we become the IMG Academy of the Midwest with a Christian-based curriculum,” Donyes said.

Walsh fits right in at Link, according to Donyes.

“Jordan comes from a faith-based home and so our faith and our values align with his, and his parents are amazing,” Donyes said. “We are not just waving that faith-based flag, but we are living it.”

“We feel like the two wings we have with Jordan and Julian Phillips, we should have two of the best finishing wings in the country,” Perry said.

Perry is familiar with Musselman, who led Arkansas to the NCAA Tournament's Elite Eight last season.

“When I coached at Western Illinois, I worked for Derrick Thomas and he and Coach Muss were together at one point in time in their careers,” Perry said. “Coach Thomas had Coach Muss come in and evaluate our team and everything for a few days, so I got to know him.”

Walsh officially visited Arkansas, TCU and Oklahoma in June and has visits to Arizona State, Texas, Kansas and Oregon scheduled for the next four weekends.

“I know Jordan really likes Arkansas and he has told me that Arkansas is recruiting him the hardest,” Donyes said.

Link Academy will open its season Nov. 2 at home against Vision Academy and will play 30 games in showcases, tournaments and stand-alone contests in 10 different states.

That includes the HoopHall South Tournament in Bentonville on Jan. 6-8. It is part of four regional tournaments around the country sponsored by the Naismith Memorial Basketball Hall of Fame.

“Our guys are super excited they get a chance to play with and against some of the best talent in the country,” Perry said.

Perry believes he has the right mix of players and people.

“What I have been saying since the beginning of this journey is that we will have the guys that we are supposed to have,” Perry said. “That’s the faith-based deal for us.